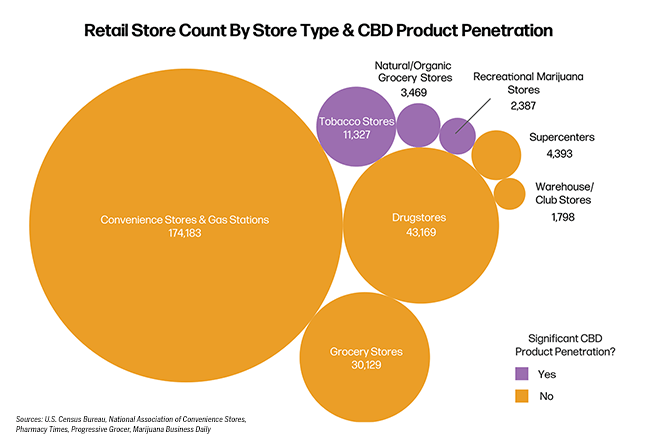 Think the marijuana retail landscape is diffuse and hard to navigate? The industry looks positively quaint compared to the monster footprint of convenience stores and gas stations.

That’s why Canadian CBD manufacturer Isodiol International partnered with a trade association to help penetrate a sales channel with retail locations in nearly every U.S. neighborhood. But that channel has an extensive set of owners and distribution arrangements.

Isodiol inked an agreement with the Asian-American Trade Associations Channel (AATAC), a network of independently owned gas stations, convenience stores and corner markets that boasts roughly 90,000 members. That’s compared with the 2,387 or so retail marijuana stores across the United States, according to Hemp Industry Daily estimates.

Isodiol is paying the group an undisclosed amount to make it easier to connect with its members. In return, Isodiol hopes to see its CBD topical products on more shelves by the end of 2019 than it ever could have hoped for.

“Just the sheer number of store locations they have access to for distribution points” made the deal too big to ignore, he told Marijuana Business Magazine.

“They already have the distribution points through the association,” Nihart explained.

Isodiol hasn’t said how much it cost to get the group to ease distribution, and AATAC representatives didn’t respond to requests to explain its business model.

The partnership gives Isodiol unprecedented exposure. Convenience stores and gas stations average 650 customers per day, compared with about 169 customers a day in a recreational cannabis dispensary, according to estimates from the National Association of Convenience Stores and Marijuana Business Daily.

After full hemp legalization, Isodiol decided to slow down the convenience-store rollout because it saw states such as Indiana and Texas pass laws setting up additional requirements for retailing CBD.

Nearly all convenience-store products sell for less than $20. Consumers buying nutritional supplements and pharmaceutical products in a gas station often look for single-serve products, such as a dose of cold medicine.

Isodiol settled on a suite of low-dose CBD products just for convenience stores:

Cannabis companies are used to patiently explaining their products and how they work to people with little familiarity with cannabis, from bankers making a loan, to new customers in a dispensary.

But when looking for distribution partnerships, Nihart said, another challenge is countering the educational efforts made by your competitors. Hemp legalization may have opened huge opportunities for mainstream retail partnerships, but it also means your cannabis company may not be the first to seek a particular partnership.

“That’s a lot of the challenge. It’s very difficult to educate (convenience stores) because every person walking in representing a different brand has a different story” about the right formulations of CBD and why their products are superior, he noted.