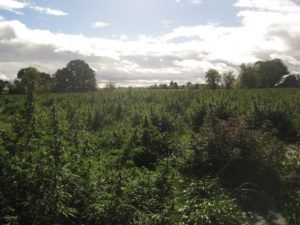 Ontario-based 48North is laying the groundwork for what would be Canada’s first large-scale outdoor marijuana crop under the Cannabis Act this spring, pending required permits from Health Canada.

The application for the farm, located near Brantford, Ontario, was filed in October by cannabis grower Good & Green. The company completed a merger with 48North on Monday.

The farm will be “disruptive” in the industry because its yield will come at a fraction of the cost compared to greenhouse- and indoor-grown cannabis, VanderMarel said.

And the quality difference is “negligible.”

The company expects its first harvest by October 2019.

Roughly 90% of “a conservative” 40,000 kilograms (88,185 pounds) of dried organic cannabis from the operation would be earmarked for extraction and “next-gen products” with the rest sold as dried flower.

If the harvest goes as planned, 48North would be in an enviable competitive position by possessing a significant amount of cannabis at a fraction of the cost of other producers. which have sunk hundreds of millions of dollars into automated greenhouses and indoor facilities.

The company estimates the outdoor crop could be produced at 25% of the cost of greenhouse-grown cannabis and 15%-20% of an indoor space.

“I think by 2020 a lot of companies will be (growing outdoors), but I don’t think there is time for many to get involved for 2019, given that the application would have had to be submitted.

“Unless your application was in this fall, you’re not getting in this spring.”

Months ago, the CEO of market leader Canopy Growth famously expressed concern that teenagers armed with drones could steal cannabis that is not grown within a greenhouse or building.

However, VanderMarel dismissed those concerns.

“Our security system would detect anything coming in from above,” she said. “With current technology and with our use of trellis netting, as well as our security system detection, I have no concerns about this.”

The farm already has perimeter fencing and security cameras in place.

She also believes outdoor-grown cannabis is better for the environment.

Canopy Growth acquired 3.6% of the issued and outstanding shares of 48North for 3 million Canadian dollars ($2.3 million).

Also, 48North has agreed to supply Canopy with a minimum of 1,200 kilograms over the course of 12 months. The first transfer is to take place this week.

A Canopy spokesperson did not immediately reply to queries from Marijuana Business Daily about whether its interest in 48North signals a change of heart on outdoor grown cannabis.

48North’s shares trade on the TSX Venture Exchange as NRTH.