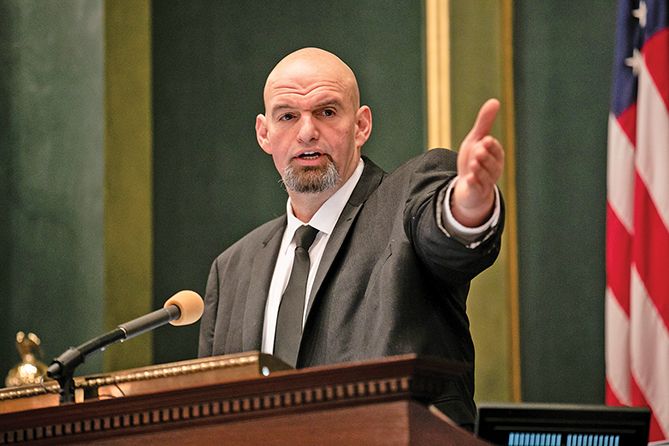 Pennsylvania Lt. Gov. John Fetterman has been traveling the state in recent months, holding “listening” sessions on the pros and cons of legalizing adult-use marijuana.

The town hall-style tour reflects a change of attitude by two-term Gov. Tom Wolf. A former opponent of recreational use, Wolf now says the state should examine the issue, partly in light of legalization talk spreading across the Northeast.

Fetterman, a marijuana advocate known for his economic revitalization efforts as the longtime mayor of the Pennsylvania Rust Belt town of Braddock, is the point person for the effort to gauge public sentiment.

He has seen the benefits firsthand. Fetterman said medical cannabis has enabled his wife to keep her back pain from a years-old horseback riding accident in the background. Before medical cannabis was legal, he said, she would have days where her back would seize up “and we’d have to wheel her to a chiropractor.”

In a March interview with Marijuana Business Magazine, Fetterman stressed that he is doing the listening—not the talking—on his tour of the state’s 67 counties.

He said it’s way too early to know when Pennsylvania might legalize adult-use marijuana or what such an industry would look like. But one can be assured, he said, that there will be tight controls, including strict rules to keep marijuana out of the hands of children. “We’re not talking about some free-for-all,” he said.

1. What do you hope to learn from the listening tour?

I don’t think there’s anything I hope to learn other than what Pennsylvania thinks. I preface each session with, “Look, what I think isn’t interesting. What is interesting is what you all think. And that’s why I’m here.” There’s no guided discovery. The opinion hasn’t been curated. We’re doing straight-up, “Come one, come all. We want to hear what you have to say.”

2. What’s struck you so far about what constituents are telling you about legalization?

In the 14 or 15 events we’ve done (as of March 6), we have not had a “con” room. We’ve had varying degrees of support. Right around 50-50 to overwhelming support. Even folks who say, “I don’t support recreational,” say, “I fully support medical marijuana.” That’s a huge development, because Pennsylvania hasn’t always been there. And I think that’s a tribute to the quality of (medical marijuana) legislation that was crafted and also the unending testimony of the benefits that medical cannabis is bringing to people. I had a wrenching story where this man cared for his mother during her last year of life, when she was suffering from brain cancer, and it’s the only thing that gave her any comfort or joy.

You can’t judge a book by its cover, whether (people are) going to be pro or con. I’ve had two little old ladies come up and say, “I’ve been smoking cannabis for 50 years.” It’s really been delightful—and (the meetings) have been civil, a civil exchange of different viewpoints, which is also something I don’t think we have enough of today in American political discourse.

3. Why is it important for Pennsylvania to explore legalizing adult-use marijuana now?

Because it’s a critical public-policy topic. We’ve had over 20,000 people weigh in online just in the last couple of weeks. We average somewhere between 175 and 215 people at every (listening) session. So, people are interested. Our neighbors like New York and New Jersey are having the conversation.

4. What do you think are the odds of adult-use legalization in Pennsylvania this year or next year?

I wouldn’t know. I personally call and invite every state representative and senator to come to the listening tour regardless of what their views are. We really strive for transparency. It’s an open invitation—we want to hear from everybody. There’s absolutely no booing or cheering tolerated. It hasn’t been an issue. But everyone is free to share their views, whether they’re on the spectrum of Cheech and Chong or all the way to “Reefer Madness” or anywhere in between.

5. What do you detect with the Legislature? Do you see a shift?

There are some private conversations. I’ve toured several medical cannabis dispensaries here. They’re professional. They’re well-lit. They’re well-designed. I think some people assumed it was going to be like some kind of head shop, and it’s like going to the Apple store and picking out a new phone or something. And that changes the hearts and minds of people, too. The Republicans who may not be there on legalization for recreational, I would commend them for passing (medical). They’ve helped craft quality cannabis legislation. So far, there seems to be 70% for (legalization)—but who knows? We still have a lot of counties to go.