Note: Periodically, MMJ Business Daily will explore the marijuana business climate in smaller medical cannabis states that typically fly under the radar from a national perspective. In this post we’ll focus on Maine.

Most medical marijuana states with dispensaries have experienced a fair share of volatility over the past few years, with raids, civil forfeiture notices, moratoriums, bans and regulatory changes creating upheaval in the MMJ business community.

The state’s medical cannabis industry doesn’t generate much buzz in cannabis circles or headlines in the national media. And with good reason: Maine is home to one of the most stable medical marijuana markets in the country and has avoided the daily drama seen in areas such as California, where every day brings a new challenge. Aside from a warning letter way back in 2011, the federal government has largely ignored Maine’s MMJ industry. Strict regulations governing dispensaries – including a limit on the number of centers – have kept the industry in check and prevented cannabis shops from popping up on every corner, helping to avoid federal attention and community backlash.

Still, Maine has the largest medical cannabis industry in the Northeast at this point, with eight operating dispensaries and thousands of registered patients. At the same time, many caregivers have started their own “businesses” that serve as their sole source of income – creating a unique situation not seen in some other MMJ states where dispensaries rule the day.

“When looking at this from a business perspective, Maine is unique in terms of population demographics and geography,” said Paul McCarrier, legislative liaison for the Medical Marijuana Caregivers of Maine, which represents patients and caregivers. “It is a poor state. Most people here don’t have money to afford high-priced product, and many live in rural areas where the dispensary model does not work. So what we find is that dispensaries are able to fill the need for medical marijuana in Portland and Bangor – where the population is dense. But caregivers are filling the gap in rural areas, and some people are working as caregivers and making a living at it.”

Although Maine’s MMJ industry is relatively stable, it has experienced some drama in the past few months – and several bills on the table could reshape the state’s cannabis business for the better and create new opportunities for entrepreneurs, caregivers and existing dispensaries. Here’s a recap of some of the latest developments:

– A bill to legalize marijuana for adult use suffered a setback when a state legislative committee this week voted 8-3 against the proposal, with opponents saying they are worried about oversight and the effects on safety and health, among other concerns. Supporters said they will now try to get the measure in front of voters in the November elections. If they can do that, there’s a good chance Maine will become one of the next states to legalize recreational marijuana, as support is strong among residents. The bill would create immense business opportunities and put Maine on the leading edge of the marijuana industry.

– The state legislature is considering six bills that would tweak various aspects of the state’s MMJ regulations and rules. One of the most significant, from a business perspective, would expand the list of qualifying medical conditions to include Post Traumatic Stress Disorder and drug addiction. Just as importantly, it would allow doctors to recommend medical marijuana for additional aliments as they see fit on a case-by-base basis. If approved, this would greatly expand the market for dispensaries, allowing hundreds or even thousands of additional patients to qualify for medical marijuana cards. The other bills call for everything from expanding the number of dispensaries in the state and boosting patient privacy to allowing caregivers to serve more than five patients and let them hire employees.

– In a development of national interest, employees of the largest dispensary chain in Maine have filed suit against their employer, claiming unfair labor practices. The charges center on the dispensary’s alleged attempts to retaliate against employees for participating in union-related activities. Expect to see more of these cases developing as the industry grows nationwide and more employees look to unionize.

– The same dispensary – Wellness Connection of Maine, which operates four centers in the state – is also under investigation for allegedly violating almost two dozen MMJ rules and regulations, including one involving the use of pesticides and others tied to additional health and safety concerns. At one point the state considered temporarily shutting the dispensary down but backed off when it realized such a move would affect thousands of patients.

– In an odd series of events, the head of Maine’s medical marijuana program made plans to step down last year, then rescinded his resignation but was ultimately fired. The exact details are a bit unclear, but the developments created some uncertainty in the market, as the former MMJ chief was a staunch supporter of the industry. Medical cannabis dispensaries and related businesses worried if the climate would change when a new chief – Marietta D’Agostino – stepped in, but so far she seems to have developed a good relationship with the industry. 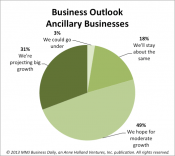