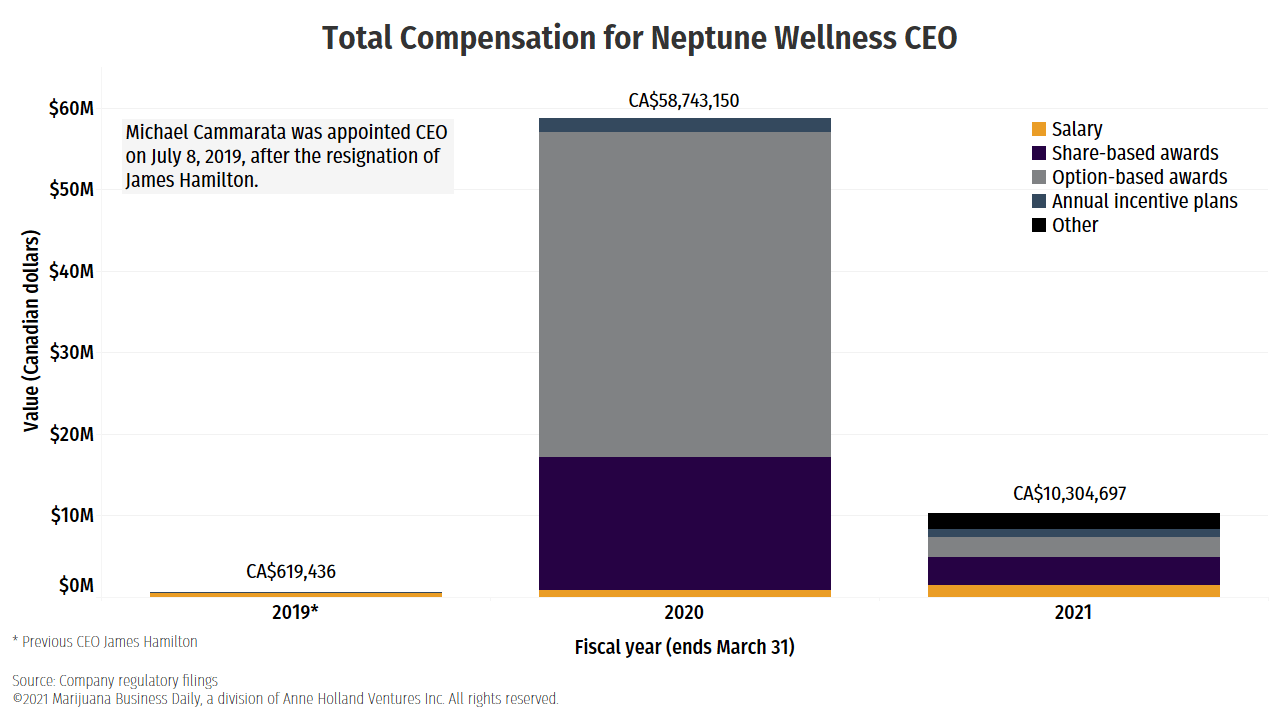 Also, the two-year sum almost matches Neptune’s revenue of CA$76.4 million for the same period. The company lost CA$229 million in that time.

However, most of Cammarata’s CA$69 million in compensation during those two years, 88.6%, came in the form of share- and option-based awards, which are contingent on various parameters that aren’t being met right now, a Neptune spokesperson told MJBizDaily.

For instance, Cammarata is eligible for a one-time cash award of $15 million (CA$18.5 million), which would be payable only once the company’s market capitalization reached $1 billion based on the 30-day average price of its Nasdaq-traded shares. As of Wednesday, the market cap stood at $87.6 million.

For fiscal 2020, most of Cammarata’s compensation came in the form of options, where he has the right to buy Neptune shares at a predetermined exercise price over a set period of time.

Those options, however, were awarded in July 2019, before the company’s shares plunged along with most cannabis stocks.

Those options don’t expire until July 8, 2029, which could provide Cammarata with enough runway to see the stock rise above the exercise price.

The latest compensation was outlined in a proxy statement filed in late July ahead of the company’s annual meeting, which occurred virtually on Aug. 26.

In an emailed statement to MJBizDaily, the Neptune spokesperson said the CA$69 million figure is “misleading” because “it does not reflect amounts actually paid to Mr. Cammarata and instead largely reflects potential compensation if performance objectives are achieved, the accomplishment of which would substantially increase value for all shareholders.”

The spokesperson said cash compensation for the past two years was approximately CA$7 million.

“The bulk of the compensation presented in (the summary compensation table) relates to inducement equity awards granted to Mr. Cammarata at the time he joined the company, which in large part vest only upon the achievement of substantial performance conditions, including the Company’s achievement of certain market capitalization or adjusted EBITDA thresholds, all but one of which have not been met,” the statement noted.

The spokesperson also said Cammarata’s commitment to the company is evidenced by the CEO’s purchase of more than $2.5 million of Neptune stock.

His bio in the 2021 Neptune proxy describes Cammarata as “a new breed of unconventional CEO.”

According to the bio, Cammarata was raised in New York and resides in Florida.

It also says his dyslexia “made school challenging, but that perspective allowed him to identify opportunities others missed. He became a technology and marketing wunderkind by his mid-teens.”

In March, Cammarata was chosen one of the Top 25 Biotech CEOs of 2021 by The Healthcare Technology Report.

Cammarata’s employment agreement with Neptune provides an annual salary of $1 million (CA$1.23 million), which is one of the highest salaries in Canada’s cannabis industry.

Cammarata’s agreement also has an annual target bonus opportunity of at least 75% of the base salary and 12 million equity incentive awards granted in the form of options and restricted share units (RSUs), according to the 2020 proxy.

Those awards included 2.8 million RSUs as an inducement to join Neptune as CEO.

As part of the equity awards, shareholders approved the grant of 7.8 million options at the annual meeting of the shareholders held on Aug. 14, 2019.

Those vest after profit and market capitalization milestones are met.

In 2021, the CEO’s compensation included:

According to the proxy, that represented compensation in lieu of director and officer insurance required by his employment agreement.

Don’t give up on market opportunities for minor cannabinoids