U.S. retail cannabis sales will rise more than five-fold over the next five years, from an estimated $2.2-$2.6 billion in 2014 to $7.4-8.2 billion in 2018, according to new financial data released today in the 2014 edition of the Marijuana Business Factbook.

Although the 2014 estimated sales are right in line with predictions from last year’s edition of the Factbook, the 2018 forecast has risen by roughly $2 billion. This lift is largely due to the impact of last August’s Cole Memorandum wherein the federal Department of Justice stated it would take a hands-off approach to the cannabis industry as long as companies obey local laws and state regulations and oversight are strict.

“This total is conservative – the reality of retail sales could be larger,” Walsh continued. “Nor does it include wholesale cannabis sales, or the billions of dollars in ancillary cannabusiness revenues such as growing equipment, real estate, legal fees, testing labs, paraphernalia, etc.” 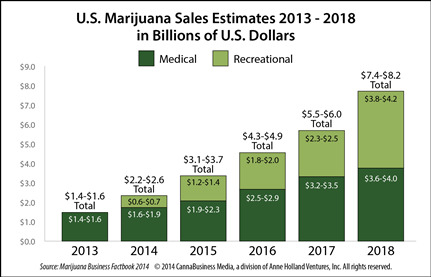 Recreational cannabis sales are only legal in two states currently. According to estimates, 2018 is anticipated to be the first year that recreational sales match or even overtake MMJ sales in the U.S.

This data does not include black market sales. However, other research indicates that despite prior industry fears, the majority of cannabis consumers are willing to switch from black market providers when cannabis is legally available in their regions.

The U.S. black market is currently estimated to be in the $40 billion range. Thus, the legal marketplace has significant potential beyond 2018.

Very few MMJ states release data on cannabis sales (or even track it.) Only a tiny slice of cannabusinesses release their financials for public scrutiny. The editors of the Marijuana Business Factbook 2014 used a wide variety of methodologies to create the sales forecasts. Sources include exclusive surveys of both cannabis consumers and cannabusiness executives, as well as statistics and political analysis reported in Marijuana Business Daily and its sister publication, CannaBusiness Magazine.

If I Did It Over Again: Tough Lessons From Colorado’s Recreational Entrepreneurs