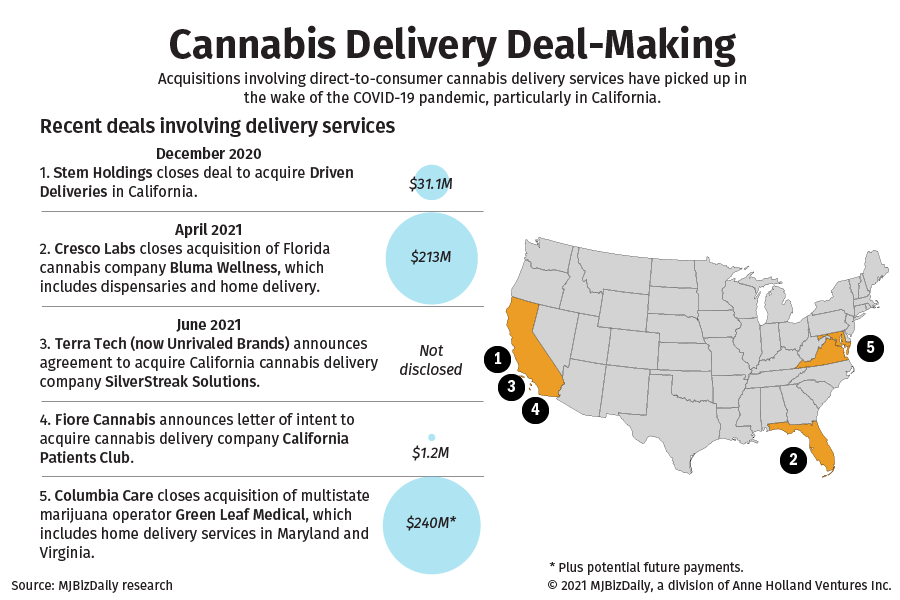 The explosive growth of e-commerce during the COVID-19 pandemic has propelled new interest in acquisitions involving direct-to-consumer cannabis delivery.

Some marijuana companies have acquired delivery-only cannabis dispensaries, while others have spent more to acquire vertically integrated MJ firms with home-delivery operations included.

Companies involved in recent delivery-related acquisitions have said that the deals help them:

“I think these M&A transactions are a part of a bigger phenomenon, which is the growth of delivery,” said investment banker Frank Columbo, director of data analytics at Viridian Capital Advisors, which tracks capital raises, mergers and acquisitions in the cannabis sector.

“It’s one way to achieve that – you acquire it.”

Several delivery-related acquisitions have taken place in the vast California market, where delivery “is critically important because of the nature of local regulation,” Columbo said.

Because so many California jurisdictions have opted out of allowing dispensaries, Columbo explained, “home delivery allows companies to reach out to places where they would have loved to have had a dispensary, but can’t.”

“But we don’t think that that’s a short-term issue. We think there’s a real long-term value and component to the cannabis sector in the delivery operations in California.”

After observing the increase in deliveries of all kinds of consumer goods during the pandemic, “we realized that we needed to be in that last-mile delivery business,” Driven by Stem CEO Adam Berk told MJBizMagazine.

However, Berk’s previous experience as CEO of the online food-ordering platform Osmio, which became Grubhub, taught him that building a successful e-commerce business takes time – hence the Driven Deliveries acquisition.

Bluma’s One Plant stores earned 15% of revenue from delivery, Cresco said when it announced the acquisition.

Fiore President and CEO Erik Anderson said the $1.2 million transaction will provide “a nice, tidy, profitable little business that has the opportunity to grow” in the Bay Area, a new market for Fiore.

“I like the Bay Area because it’s got a huge population, a lot of connoisseur-type customers,” he said.

On top of that, Anderson said the owner of California Patients Club will stay on to run the delivery business, giving Fiore access to his delivery expertise.

Unrivaled Brands CEO Knuettel said the SilverStreak acquisition will give that company “one of the strongest, if not the strongest, player in the greater Sacramento area.”

“Trying to re-create the brand-name awareness, the customer database, the operational platform, would take time and money,” he said.

“This is an opportunity for us to accelerate our growth … maybe even for (less money) than trying to create a new brand name,” Knuettel added.

“And at the same time, we can leverage their technology and their platform into our other facilities.”

In some cases, companies acquiring delivery companies plan to use those services to boost their operations in other state markets.

Driven by Stem, for example, is featuring home delivery prominently in its plans to enter the Michigan market later this year.

The Maryland delivery assets could also be leveraged in adjacent markets such as Delaware and Washington DC, Columbia Care said.

Looking to the future

A regulatory shift toward permitting cannabis delivery during the pandemic suggests that marijuana companies interested in buying existing delivery operators could have new acquisition targets in the future.

In Massachusetts, 90-plus applications for marijuana delivery licenses were submitted as of late June.

Unrivaled Brands CEO Knuettel observed that recent delivery-related acquisitions are taking place in the context of an industrywide consolidation trend as the cannabis sector recovers from a period of scarce capital.

However, he added, “at a micro level, (direct-to-consumer delivery) is one of the more appealing asset classes in the cannabis sector.”

“In states where direct-to-consumer (delivery) is allowed, I certainly would expect to see an increased trend of acquisitions,” Knuettel said.

Younger consumers tend to be more interested in remote purchasing and home delivery, he observed.

“And that matches pretty well with the growth in the cannabis sector.”

“E-commerce is growing at multiples of the growth of in-store commerce,” he said.

“And I think that that same thing will be happening in the cannabis world.”