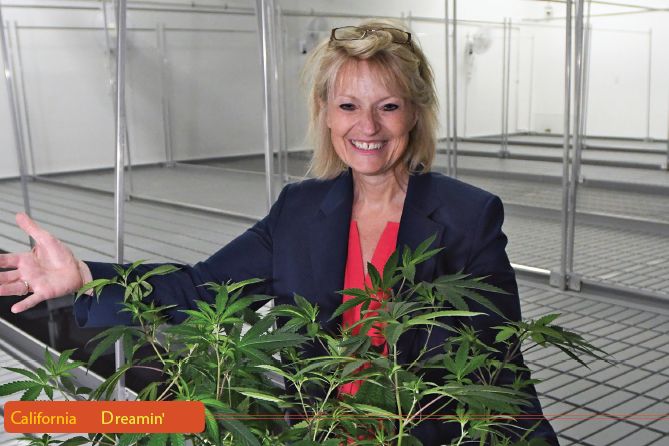 California has one of the largest economies on Earth, and it’s about to be wide open for cannabis entrepreneurs.

Contrary to what many may believe, the state’s cannabis market isn’t overly saturated, despite the thousands of existing marijuana-related companies already in operation.

“There’s always room for someone to come in and create a brand and a lane for themselves. It’s just who has the brains and who has the money to get in and make it happen,” said Virgil Grant, president of the Southern California Coalition (SCC), a Los Angeles-based marijuana industry organization.

Grant is far from alone in that assessment. Plenty of others see an abundance of business opportunities in the Golden State, in large part because a lot of industry insiders don’t think a majority of existing businesses will be able to – or will choose to – make the transition to the regulated market. That means literally thousands of business licenses will be up for grabs.

If there are business opportunities, then, where are they? What sectors provide the most options?

Each sector has its pros and pitfalls. Retail may present the biggest profit margins for those who can obtain licenses to run storefronts. But the question is whether a given business will be able to win those permits, as many cities are limiting the number they hand out and the process is highly competitive.

When it comes to infused products, there are already dozens of recognizable brands in the California market, so it could be tougher to break into that niche. But many state industry experts say it can be done with the right product and branding.

For testing labs, one of the biggest hurdles is startup capital for expensive equipment and high-level salaries for experts that will be able to give the company scientific and industry credibility.

When it comes to ancillary business options, however, the sky may be the limit.

“The economic opportunity in California is so significant that the businesses that are going to be required, not only in cannabis but to support cannabis, is unmeasurable,” said Greta Carter, the president of G.Car Companies, which has California business interests in cultivation, retail, extraction and more.

Carter said such ancillary opportunities could extend to alternative energy, water and environmental conservation, or more traditional MJ business models such as packaging and labeling. But those ancillary options will extend into almost every niche that other industries also need: accounting, legal services, insurance, security, real estate, etc.

One of the biggest questions for plant-touching business opportunities is geography.

“When you look at the landscape of California, there are so many jurisdictions that don’t currently license or permit marijuana business activity. So many counties and cities have a complete ban,” said Sean Luse, chief operating officer of Berkeley Patients Group, one of the oldest dispensaries in the state.

As of late September, only 19 of California’s 58 counties and 112 of the state’s 482 municipalities had adopted or were in the process of enacting some sort of ordinance to allow for legal cannabis companies, according to Jacqueline McGowan, the CEO of Canaccelerate, a Sacramento marijuana consultancy that also provides business incubator services to entrepreneurs, startups and investors.

McGowan tracks California’s cannabis-related laws at the local level, and she noted that even of those 19 counties and 112 towns, many are not wide open for new entrants and have already issued all the business licenses they intend to or struck one-off deals with a single company.

“Investors beware. It’s extremely important to know this does not mean each of these jurisdictions are open for business,” McGowan said.

In addition to McGowan, another resource for companies looking into local ordinances is CannaRegs, a website that provides an online database of county and municipal governments’ MJ business regulations.

Looking ahead, industry insiders expect more towns and counties to embrace the MJ industry as local officials realize how much tax revenue is at stake.

Local regulations will also play a big part in determining which sectors will provide the most opportunity. For example, most municipalities will have some sort of cap on how many retail permits they’ll issue, while indoor growers may be limited to where they can find appropriately zoned warehouses. Extraction companies may have to set up shop in municipalities that allow for volatile solvent use, because most do not.

A consensus among California industry veterans is that the best places for retail opportunities will be in the population centers. However, many of those are already leaning toward some sort of cap on the number of storefronts they’ll allow, with plenty limiting it to just a few dozen.

Many major cities – including Los Angeles – were still hammering out regulatory details as of October, while others have ordinances on the books allowing for a small number of storefronts. For instance, Long Beach, a prime location for retailers just south of L.A. proper, currently allows for just 32 medical marijuana dispensaries. Los Angeles itself could eventually permit several hundred retailers, but to start it’s going to give licensing priority to 135 dispensaries that have been in operation since at least 2007.

For those not already experienced in a specific plant-touching niche of the cannabis trade, “Dispensaries are probably your best bet,” the SCC’s Grant said.

“If you’re not an experienced cultivator or manufacturer, and you’re not connected with one, then you’re going to be investing a lot of money into learning the business,” he added.

Those looking to get into cannabis cultivation will have a host of options, with actual locations probably being the least of all possible business worries. Rather, the key in this sector will be either raising the capital to go big – which will cost any operator millions of dollars – or having the business savvy and connections to develop a craft grow that remains competitive in a market that’s almost certain to be flooded with product.

Again, the best opportunities will likely be determined by local ordinances and whether a company has a preference for growing indoors, outdoors or in a greenhouse. Some small desert towns like Adelanto and Desert Hot Springs have tried making themselves more attractive to large-scale commercial growers by adopting pro-industry regulations and low tax rates. For example, Adelanto adopted an ordinance specifying that it won’t impose more than a 5% of gross receipts tax on MJ companies.

The big caveat here, warned Berkeley Patient Group’s Luse, is that growers should be prepping to compete in volume. If they’re not, they’re probably setting themselves up for failure.

“If you’re not looking at cultivation with a very low cost to produce a pound on a very large scale, you probably won’t be able to compete in the California market,” Luse said.

This is perhaps the biggest and best niche for new market entrants, according to longtime L.A. industry consultant Avis Bulbulyan.

“Your only limitation is your imagination,” said Bulbulyan, CEO of SIVA Enterprises, a cannabis-focused businesses services firm. “Anything that can be consumed can be infused, so go figure out what your customers want. The consumer base is already there, so … it all comes down to branding.”

Extraction may be one of the most strictly regulated niches within the cannabis industry, specifically for operations that use volatile solvents in their manufacturing process. So location may be key for many such companies.

This is another area in which small desert towns like Adelanto and Desert Hot Springs have reached out to MJ businesses.

Even more, however, have already approved both volatile and nonvolatile solvent extraction for medical cannabis production, and may also allow for the same with rec. Oakland and Long Beach are prime examples.

Testing labs will likely prove to be a major growth sector, predicted Lindsay Robinson, the executive director of the California Cannabis Industry Association. That’s in part going to be out of necessity, since all California product must meet stringent testing requirements before going to market and the state had only about 20 operating labs as of mid-September.

“That number is going to grow, and it’s going to have to grow,” Robinson said.

Where to locate will be less of a problem for testing lab companies, but those starting labs will probably want to be fairly close to the cultivators they’ll be serving. And since dozens of cities and counties have already opted to formally allow labs to locate within their jurisdictions, the main obstacle for labs will likely be finding real estate.

Throwing money into the marijuana industry won’t require a certain location, given that checkbooks are portable. But the longstanding traditional axiom of sticking with ancillary cannabis companies is starting to head out the window, said Roy Bingham, the CEO of BDS Analytics, a data analytics firm in Boulder, Colorado.

In the past, he and other industry insiders said, many investors chose to stick with non-plant-touching companies simply because of 280E, the federal tax code provision that shrinks the profit margins of cannabis retailers, growers and other plant-touching businesses. But that approach is changing as the industry grows and as more investors begin to look further down the road.

Concentrates in particular, Bingham said, are a major growth niche and already represent about a quarter of the overall California market. He also said edibles and topicals will likely prove to be solid areas in which investors could look for promising companies.

Just as picks and shovels made the fortunes of plenty of companies during the 19th century Gold Rush, ancillary companies in the cannabis industry will do well in California in coming years, too.

“There’s so much money in ancillary businesses. When you look at companies like WeedMaps or Leafly, those are companies that make $40 million or $50 million a year, some up to $100 million a year, and they don’t even touch the product,” Grant said. “It opens up a whole host of opportunities for businesses to thrive.”

That niche again runs the gamut, however, and depends on the company, the service and the market that a business wants to target. But some obvious needs that the California industry will have include packaging, security services, construction and labeling.