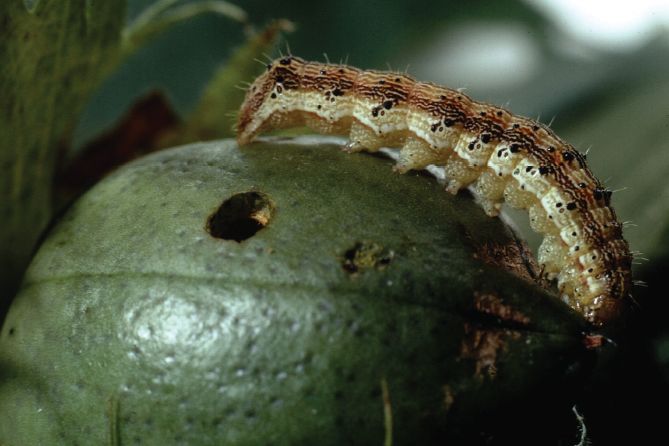 How hemp growers can combat weeds, insects and disease

Hemp farmers are thousands of years behind – meaning they’re just starting to develop strategies to fight pests and disease that other crops were bred to resist millennia ago.

Just like marijuana growers, hemp producers suffer from a lack of agronomic expertise and pest-management options. So when hemp crops are attacked by leaf-chewing corn earworms – or hemp greenhouses get a white mold infestation – publicly funded horticulture advisers usually know little about the crop or won’t offer assistance. And hemp growers in most places can’t use pesticides because of federal regulations.

Standing in front of a plot of scraggly, weed-choked hemp recently at a research farm owned by the University of Kentucky, soil scientist Robert Pearce said that hemp growers are desperate for pest-control help but don’t have a lot of options.

“I’ve got growers out here who are asking for help, asking, ‘What can we do?’ when they see pests,” Pearce said.

The good news is that pest-fighting strategies are becoming more available. They range from using rich, healthy soil to being a stickler for cleanliness and employing old-fashioned mechanical technologies to combat things like weeds. Persistence also is a must.

Moreover, additional help is on the horizon. Some research universities that have been slow to embrace marijuana are putting serious effort into researching hemp, a crop that is now legal to grow in 33 states. The 2014 Farm Bill authorized cultivation for research purposes and pilot programs.

Hemp growers also can tap their cannabis colleagues who are cultivating marijuana. After all, hemp and marijuana are both the species Cannabis sativa and susceptible to many of the same pests and diseases. From leaf-chewing caterpillars to seed-stealing finches and microscopic organisms, plenty of visible and invisible critters can set in.

Below are expert tips and advice for managing the weeds, insects, diseases and other threats that can target hemp.

The first question for a hemp grower is where to raise the crop. There are pros and cons to growing hemp in a greenhouse or warehouse versus outdoors, and pest management is a big consideration.

Bugs are a problem in either environment. But while greenhouses frequently see pests drawn by heat and humidity – especially mildews and molds – outdoor hemp fields are susceptible to different bugs and even bird attacks.

That means a hemp grower needs an action plan to address pests in either environment.

“We look at greenhouses differently than we look at a field,” said Nicole Ward Gauthier, a plant pathologist for the University of Kentucky Cooperative Extension Service. “There are different types of disease pressures in each system.”

It sounds like a no-brainer, but traditional farmers experimenting with hemp are often tempted to try the crop on a piece of marginal land – tucked away from public view and not the farmer’s main revenue producer.

That can lead to avoidable mistakes.

“It’s not a straightforward thing of just go put hemp in a field and it’ll grow,” said Tom Hutchens, director of research for Atalo Holdings, a hemp research, development and processing company in Winchester, Kentucky.

Hemp needs well-drained loam soil – so avoid valleys or anywhere with standing water after a rain. And hemp gobbles nitrogen from the soil, making it a bad choice in an area with low nitrogen levels in the first place. Even in nitrogen-rich soil, hemp can need an additional 130 pounds per acre of nitrogen before harvest.

And don’t put hemp where the soil might already be harboring rots or borers that also attack hemp. Researchers suggest not planting hemp on land that just held canola, edible beans, soybeans or sunflowers – all invite pests that are also known to infect hemp.

Greenhouse and warehouse hemp growers need to think about soil or growing matrix, too. Make sure not to recycle soil that might have any pathogens in it, such as gray mold (Botrytis cinereal) or white mold (Sclerotinia scleroriorum).

“Dirty hoses, used pots, used (growing) media – they can all lead to some nasty outcomes in a greenhouse,” Gauthier said.

Indoor growers should use a disinfectant such as quaternary ammonium chloride (brands include GreenShield or Physan 20) or even bleach to clean surfaces between every hemp crop. Even a clean crop with no visible pests or disease damage could be grown in soil harboring nasty critters biding their time.

Gauthier also recommends that indoor hemp growers install foot mats treated with disinfectant and require workers and visitors to use them before entering a greenhouse. The mats help prevent employees from tracking in microscopic pests from the ground outside. Disinfecting mats are commonly used in marijuana greenhouses and should be used in hemp greenhouses, too.

Even if the hemp is planted in pristine conditions, weeds can choke out the individual plants.

So hemp growers say they’ve got to rely on old-fashioned mechanical means to keep weeds down.

One such method for outdoor hemp farmers is cultipacking, where the soil is compressed to inhibit weed growth before putting down hemp seed. A cultipacker is a heavy iron roller that mashes dirt clods, eliminates air pockets and packs down stones to create a good seedbed. A secondhand cultipacker can be had for less than $500 on eBay, and the tow unit can be dragged behind a four-wheeler or tractor.

Graves suggests planting in rows and physically chewing up weeds that grow between the hemp lines with a tractor.

“It’s old-school cultivation. You plant in rows and chop out weeds in between, or run them over and mash them down,” Graves said.

Another suggestion is to seek hemp that can suppress weeds itself. Hemp plants that reach 12 inches tall within four weeks can help shade the soil and block weeds growing in between hemp plants.

The trouble with using hemp as self-defense, though, is that farmers don’t yet know which cultivars of hemp will grow so quickly at their location.

Limited pesticide options mean that once bugs are visibly chewing on hemp leaves, it’s too late.

“There’s nothing you can do; you have to just sit there and let your crop get eaten up,” said Burt Eure, who is working on developing hemp seed at White Hat Seed Farm in Hartford, North Carolina.

Outdoor hemp growers have one pest that indoor cultivators don’t – birds. Kentucky researchers have tried erecting nets over experimental hemp plants, only to see birds go under them to gobble tasty hemp seeds.

“They’re beautiful, but as soon as birds see you’re putting seeds down, they’re on it,” said Tyler Goodlett, a student at the University of Kentucky researching bird-deterrent efforts on an experimental hemp plot.

Doves and sparrows are the main culprits, he said. And some cultivars that might escape birds’ notice in the first year or two eventually fall prey after birds figure out that hemp seeds are tasty and filling.

Complicating matters is that hemp – unlike other crops – is prone to “shattering,” when the plant drops seeds on its own schedule instead of when the hemp grower wants it. The seed-dropping then draws birds, which can ruin the crop for any seed production.

“Shattering is a trait that was bred out of most commercial crops thousands of years ago, so we don’t even know how they did it,” said Craig Schluttenhofer, a post-doctoral soil scientist at the University of Kentucky.

“Most crops don’t have shattering, but hemp does, and it can really impact yield,” he said, waving to a flock of birds circling above his test hemp plot outside Lexington, Kentucky.

Hemp growers with a couple of seasons under their belts – an eternity in this nascent industry – have bad news for newbies. That is, even if they manage to fight off pests, weeds and disease their first year, they might see an explosion of pests in Year Two.

Just like the Kentucky finches that figured out hemp seeds were tasty, smaller pests and microbes may not immediately follow hemp into a new environment. But they don’t take long.

“Your only real defense is to start with the healthiest plants and use meticulous cultivation practices,” Gauthier said.