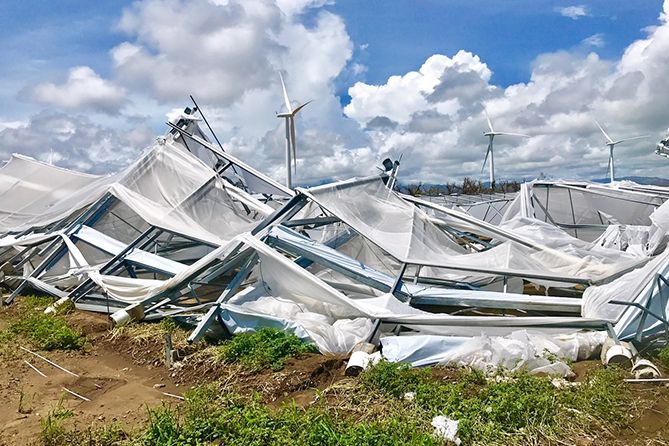 Any business is vulnerable to a natural disaster, be it a flood, hurricane, earthquake or wildfire. But in the cannabis industry, where business and property insurance can be hard to come by, an act of God can be particularly devastating.

Since 2017, the cannabis industry has seen several catastrophic events hit business owners, forcing them to rebuild their operations from the ground up.

Two natural disasters in 2017 were particularly damaging: the deadly wildfires in California and the devastating impact of Hurricane Maria on the southeastern United States and the Caribbean.

In Puerto Rico, medical marijuana business owners suffered millions of dollars in losses after the Category 4 hurricane wiped out cultivation, manufacturing and retail facilities and knocked out power on the island for months.

“There’s a lot of chance and bad luck that comes with events like this,” said Erich Pearson, the founder of SPARC, which has a cannabis cultivation operation in Glen Ellen, California.

Pearson lost about $5 million worth of cannabis in October 2017, when wildfires roared through Sonoma County.

What can a cannabis business owner do to rebuild once a company has been ravaged by something beyond their control? Industry experts recommend the following:

Mariela Quiñones, vice president of business development for Encanto Giving Tree, a Puerto Rico MMJ business with a greenhouse and manufacturing site in Santa Isabel and four dispensaries across the island, had to rebuild after Hurricane Maria hit in September 2017.

The winds, which clocked in at more than 100 mph, destroyed the greenhouse, costing the company at least $1.5 million in damages and lost revenue.

This time, Quiñones is building two smaller greenhouses out of galvanized steel that can be easily dismantled to avoid the damaging winds of a tropical storm. The galvanized steel columns are designed to sustain winds of 80-100 mph. The greenhouses also are closer to the ground, so they aren’t as exposed to hurricane-force winds.

Her company also has built a “bunker” – a building with concrete walls where employees can store materials such as hydroponic equipment and trellises during a hurricane. The facility doubles as a nursery when it’s not protecting equipment and crops.

“We’re ready,” Quiñones said. “We took all the measures necessary to prevent this from happening again.”

Pearson’s cannabis farm is on a 400-acre ranch. Last year, his crop was harvested and had just begun drying when fires swept through, torching everything, including the property’s outbuildings and homes.

Unfortunately for Pearson, the $5 million loss wasn’t insured. It was a straight hit to his bottom line.

A year later, the facility is almost completely rebuilt. Pearson said he’s hit a few snags with the regulatory hoops he’s had to jump through when obtaining state permits. But aside from that, his operations are not only almost back to 100%, they’re better prepared for any future fire.

The new buildings are made from metal, unlike the previous wood structures.

“That’s just how you build buildings now,” Pearson said. “It’s the economical way to do it, and, of course, they are more fire safe.”

Most of Pearson’s fire-safety measures are exterior treatments to the land as well as preventative equipment.

“Fire sprinklers on the inside of a building, for forest fires, don’t do much,” Pearson said. “It’s important to think about fires coming from outside if you’re in fire-prone areas like we are in Northern California.”

He recommends anyone growing cannabis in an area prone to wildfires have access to a large amount of water.

A tanker truck that can hold 3,000 gallons of water and be connected to a high-pressure fire hose is a good idea, according to Pearson. You should be able to find one for about $30,000, he said.

To fight a fire, you also need enough water storage to be able to fill the tank quickly. Pearson said that with the right system, you can fill the tank in 20 minutes. He suggests connecting the well to a gasoline-powered pump, so you don’t need electricity if the grid goes down.

Pearson also recommends having access to an old bulldozer to carve out fire breaks.

Managing the vegetation around your buildings is another good strategy. To keep the flames away, Pearson installed a gravel lot that’s 100-150 feet wide and surrounds his buildings.

Pearson noted that, until last year, there hadn’t been a wildfire in his immediate vicinity for 30 years. He didn’t have insurance at the time of the 2017 wildfire, and in hindsight, he admits he should have had some form of coverage.

But there’s a sticking point: Federal crop insurance is not an option for cannabis cultivators, whether they’re growing hemp or marijuana, because the plant remains illegal in the eyes of Uncle Sam. A handful of companies will cover marijuana and hemp growers through a form of crop insurance.

Of the cannabis farmers who were insured, those in Pearson’s area are finding out that insurance covers only about half the damage. Pearson advises that cannabis business owners make sure they’re insured for actual replacement costs, not where the market values your product when the natural disaster occurs.

Looking ahead, Pearson said he is ready for the next natural disaster. He “absolutely” believes a wildfire will happen again, as increasing temperatures become the new norm in Northern California. “It’s going to come,” Pearson said. “It’s just a matter of when.”

While rebuilding a business is an option, it can be difficult and costly to safeguard your property against a natural disaster, according to Taylor Blake, who lives in the Mendocino County town of Willits, California. As the executive producer of the Emerald Cup, a cannabis cultivation competition in Northern California, Blake has heard firsthand from many growers who have had to start over.

“It’s very difficult to put in the type of measures you would need to avoid having any damage to your farm,” she added.

For starters, Blake suggests that any cannabis entrepreneur who operates a cash-based business should keep any money in a fireproof safe.

And if you’re in need of outside money to rebuild, a good course of action is to advertise your expertise in growing cannabis. There is plenty of outside interest – particularly in California’s burgeoning marijuana market – so leveraging your experience for a partnership shouldn’t be impossible.

“If you were an experienced member of the cannabis community, you do have a good leg to stand on,” Blake said. “You can convince someone to invest in helping you rebuild.”