Nearly half the country thinks the federal government should allow Colorado and Washington to move forward with marijuana legalization, according to a new survey.

The results highlight growing support for – or at least tolerance of – cannabis legalization in the US and could help pressure the Obama administration to respect the new laws.

The government still has not provided an official response to legalization, leaving state officials, the MMJ industry and cannabis entrepreneurs in the dark. Washington State’s law is set to go into effect Thursday, while Colorado’s will be implemented in the next few weeks.

The government could look to block the new laws entirely or challenge provisions that call for retail sales. Alternatively, it could work with states to implement the laws in a responsible, measured way.

That seems to be the preferred strategy for a majority of Americans. The Public Polic 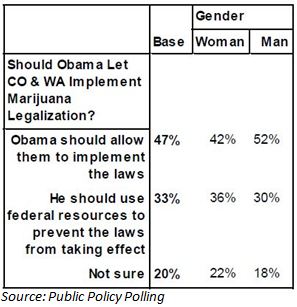 y Polling (PPP) survey of 1,325 registered voters, taken between Nov. 30 and Dec. 2, found that 47% of Americans think the president should allow Colorado and Washington to implement their legalization measures. Just 33% believe the government should use federal resources to block the laws, while 20% said they are not sure how the Obama administration should respond.

At the same time, 58% of respondents said they think marijuana should be legal vs. 39% who hold the opposite view. That’s a different picture than the one presented by a recent CBS poll, which found support for and opposition to legalization at an identical 47%. Still, that poll – taken in mid-November – showed growing support for legalization in general over the past year. It also found that a whopping 83% of Americans back the idea of medical marijuana.

The evidence is quickly mounting – be it through polls or election results – that Americans are much less concerned with medical marijuana and cannabis in general than they once were. At some point, the government will have no choice but to listen.

“The increasingly strong national support for making marijuana legal demonstrates that the writing is on the wall,” Steve Fox, the director of government relations for the Marijuana Policy Project, said in a statement responding to the PPP poll. “Marijuana prohibition’s days are numbered. The Obama administration cannot stop history. If it interferes in the implementation of these new laws, it will only unnecessarily prolong the chaos of an uncontrolled market.”