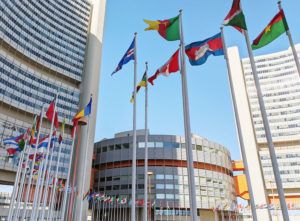 A view from the 63rd United Nations Commission on Narcotic Drugs in Vienna this week.

The 63rd session of the United Nations Commission on Narcotic Drugs (CND) in Vienna this week laid bare deep divisions in the international community over the World Health Organization (WHO) cannabis scheduling recommendations.

Rather than voting on recommendations that would have far-reaching implications for the global cannabis industry, the CND postponed the vote to December.

The delay underscores the difficulty in reaching agreements on cannabis policy on a level that transcends national borders.

“Medical cannabis is more mainstream than ever in places like Canada and the USA. However, internationally the challenge ahead for access becomes clear,” Michael Krawitz, executive director of Veterans for Medical Cannabis Access told Marijuana Business Daily.

“Countries like Indonesia and Russia sound like North American drug warriors from back in the 1980s, and if the USA timeline works as a model, we are just beginning a decades-long process.”

Given the current level of disagreement, postponing the vote was the best outcome for the recommendations to stand any chance of approval.

A forced vote this week would have likely resulted in a negative result.

“This is a very important but, at the same time, very sensitive issue because of the divergent opinions – not only among the states but among the people in general,” CND Chair Mansoor Ahmad Khan said.

It can be reasonably estimated that:

The CND chair said during the full session Wednesday that “it became clear that some delegations do not have a clear understanding on the implications and consequences of the recommendations, while others were already prepared to vote.”

During an informal dialogue Thursday, the CND chair said he “tried to work around to build a compromise which tries to balance these two positions.”

Tomas Sadilek, director of governmental affairs at the Prague-based International Cannabis and Cannabinoids Institute (ICCI) told MJBizDaily that pushing countries to vote could have resulted in an “irreversible negative outcome,” possibly even thwarting governments from enabling medical cannabis regulations.

Bringing undecided countries into the “pro-rescheduling” fold is no easy task.

“There’s a big challenge ahead to in just a few months convince at least the undecided countries to support the recommendations.”

During the informal dialogue, the CND chair said that he would like to “hold some informal consultations … where legal and domestic experts from member states can come in.”

He indicated there could be “two or three meetings” before December “depending on the availability of resources.”

“So I hope that when we go into December more and more states have better clarity,” he said.

In their statements, some countries or group of countries expressed a somewhat favorable opinion about the recommendations or showed some willingness to vote.

The countries that expressed opinions against voting now and, in some cases, also against the recommendations represent the vast majority of the global population, revealing the uphill battle ahead for the normalization of the medical cannabis industry.

A common theme expressed by several countries – including Russia, Nigeria, Japan, Sudan, Brazil and Palestine – was the “social, legal, administrative” and other types of implications of the WHO recommendations.

Here are responses from some of the countries with negative views: