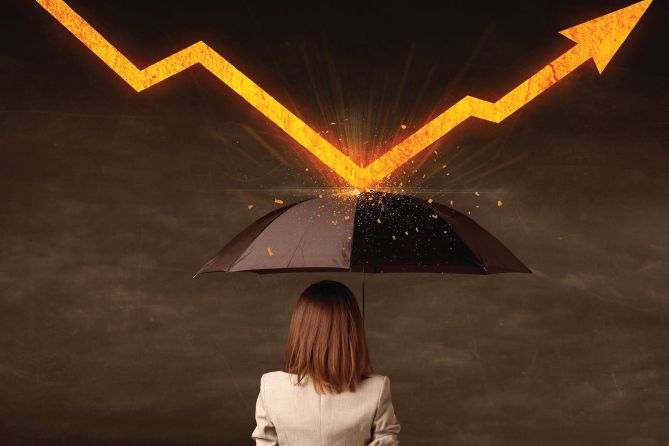 The devastation delivered a harsh reminder to the cannabis industry: Most growers lack crop insurance to protect themselves in the event of a major financial loss.

By contrast, mainstream farmers across the United States can insure their wheat, corn and other crops against natural disasters and tumbling farm prices thanks to Uncle Sam. Chalk it up to a government-run company, the Federal Crop Insurance Corp.

But federal crop insurance is not an option for cannabis cultivators, whether they’re growing hemp or marijuana, because the plant remains illegal in the eyes of Uncle Sam.

Insurance, however, is arguably more important for cannabis businesses: They’re not eligible for bankruptcy protection and often can’t rely on traditional banking for a short-term loan if something goes horribly wrong. If there is a loss that’s not covered by insurance, there may be no way to recover.

“If something were to happen, if there were a fire or a big theft, you’re just in trouble,” said Gerry Jones, managing partner of Cannabis Insurance Solutions, a brokerage in Littleton, Colorado, that provides insurance products to the cannabis industry. “It takes three months to regrow that crop, and the margins are really thin.”

A handful of companies will cover marijuana and hemp growers through a form of crop insurance – provided the plants are cultivated indoors or are inside a facility when the loss occurs. A typical crop insurance policy costs from 1.5% to 1.8% of a business’ total revenue.

But you need to pick your agent and policy carefully, and there are some other insurance products businesses can purchase to help when disaster strikes your crop.

Here are tips for how to safeguard your plants against loss.

Jones said most cannabis growers don’t purchase crop insurance, largely because they’re “focused on their core business and just want to get up and running.”

In addition, those same growers are like many in fire-destroyed California, where much of the crop is cultivated outdoors – and so ineligible for crop insurance.

While many cannabis growers don’t want to pay for crop insurance – reasoning that any claims would be denied – Jones said it’s the cost of doing business. For starters, many outside investors in a company may insist on it. Also, the idea that insurance companies won’t pay claims is wrong.

In 2015, for example, Cannabis Insurance Solutions paid a $106,000 claim to Cannabis Corp. after thieves used a crowbar to break into the Denver company’s cultivation facility and swipe the crop.

Jones, in a statement this past fall, did not cite crop insurance. But the commissioner did say “investors, owners and operators of cannabis businesses all should have insurance coverage available to help them recover when something goes wrong just as any other legalized business does.”

A good agent is invaluable when seeking crop insurance. Even though Cannabis Corp. has such insurance and received a payout, it wasn’t easy to get the underwriter to fund the claim. Cannabis Insurance Solutions jumped into the middle of the dispute and convinced the adjuster to pay the claim.

“Insurance adjusters are third-party companies that review the claim and match it to the contract language in the coverage to make sure the claim should be paid,” said Jones of Cannabis Insurance Solutions.

“Cannabis is new to most of these folks, and they may have some preconceived idea about how operations in cannabis work. It came down to definitions around the type of crop and how the insured was curing the plants. It took some back and forth,” he added. “We produced a document outlining the definitions, pictures and various processes to ultimately get the crop loss claim approved and fully paid.”

That’s why it’s critical to work with a knowledgeable agent who understands the insurance industry and the cannabis business, said Cannabis Corp. CEO Jeff Mascio.

“Having a competent insurance agent is absolutely imperative,” he noted.

Mascio said the insurance company and its agent both must be intimately familiar with the details of the policy and ensure the insured business is compliant with all the conditions spelled out. Mascio’s own crop insurance policy runs hundreds of pages.

“If certain criteria were not met, they were not going to cover certain claims,” he added. “The best thing to do is find a competent agency that’s going to focus on all of the details and source all of the different options.”

The conditions contained in a policy can include everything from how far cameras are from the door to how long video recordings are kept. Other conditions are likely to revolve around security and sprinkler systems.

Most insurers, he added, will provide a better property rate or discounts if the business has a sprinkler system in place, but they are not mandated.

Insure Plants From Seed to Sale

The insurer has policies for growers, dispensaries, extractors and manufacturers, as well as policies for plant-touching ancillary companies such as testing labs.

Because cannabis plants are tracked from seed to sale, it’s easy to determine the amount of a loss.

“It’s a set amount we work with the grower on,” Jones said. “The further up the stage you go, the more valuable the plant becomes. The percentages are based on the wholesale value of the plant.

“That’s important from an insurance perspective because it’s tracked, so you know how much it’s worth,” Jones added. “The valuation of those plants grows the closer you get to it being harvested.”

Jones said he is troubled by the many insurance agents who sell products that cannabis businesses think will cover their crops. But, in reality, they won’t. Traditional insurance companies, he said, will sell a cannabis business a policy without knowing what industry it’s in – and the document will specifically exclude cannabis.

Though crop insurance is what it boils down to, Cannasure’s McManamon said the term is a misnomer, largely because nobody insures cannabis that’s grown outdoors.

“When you see the term crop insurance, it’s really just property coverage for plants if there’s a fire, theft or vandalism,” said McManamon, whose company has about 1,000 customers, with Colorado companies making up 30%-40% of its business. More than half of Cannasure’s customers grow marijuana indoors.

Cannasure assigns a value to the plants based on information its customers provide when filling out their applications. It generally costs $1 to $1.50 per $100 of insurable value to cover cannabis plants.

“We’ve covered theft and vandalism at cultivation facilities where they’ve destroyed the door and stolen the finished stock,” McManamon said. “If they own the building, we insure the building just like any business.”

That includes coverage for plants that were grown outside but moved indoors after being harvested. It also includes greenhouse structures.

“If a fire reached that location, it would be covered,” McManamon said. “But if the crop is outdoors, there’s no coverage. Winds, rain and fire can destroy it, and it’s such a new industry that there’s not any coverage there.”

McManamon said it likely will be years before there’s an insurance product that will cover outdoor crops.

That will come as little comfort to outdoor growers, particularly those devastated by fire in Northern California.

“A lot of people have spent the last year preparing for legalization and were relying on the harvest season to replenish their cash,” said California grower Kyle Kushman. “Now they’re destitute.”