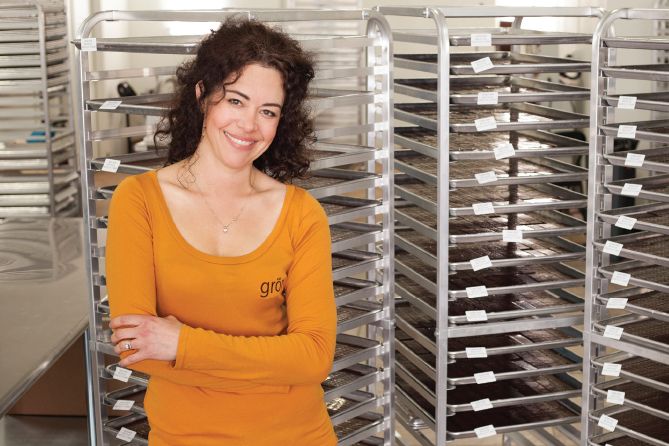 The full-fledged launch of Oregon’s recreational marijuana program got off to a rocky start in the fall of 2016.

Strict marijuana testing standards, a dearth of labs and other factors threw a wrench into the plans of many Oregon marijuana businesses, resulting in plunging revenue and half-empty store shelves.

But edibles maker Grön Chocolate skillfully navigated Oregon’s chaotic regulatory landscape and succeeded in getting its products on retailers’ shelves in time to capitalize on the full-scale kickoff of recreational cannabis sales in October 2016.

A commitment to strategic planning, product testing and consistent dosing gave the Portland-based company a jump on its rivals. Thanks to the use of top-notch ingredients, Grön also has distinguished itself as an award-winning maker of high-end, infused artisan chocolates.

Christine Smith, Grön’s CEO and founder, credits the company’s success to her previous career as an architect.

“I did a lot of project management on multimillion-dollar projects,” Smith said. “I brought planning and strategic thinking with me into the (cannabis) industry.”

That approach helped Smith move from tinkering in her kitchen to developing a full-fledged marijuana business that launched in 2014.

Grön – which is Swedish for “green” and is pronounced “groon” – now supplies more than 300 retailers across Oregon with a variety of chocolate products infused with THC and CBD. With $1.6 million in 2016 revenue, Grön employs 20 people and projects $4.5 million in 2017 sales.

Plan Ahead and Act On It

Grön confronted a number of challenges in 2016 as Oregon prepared to fully roll out its adult-use marijuana program. The state imposed stringent testing requirements for potency, contaminants and pesticides. A significant amount of cannabis failed to pass muster, and a shortage of operational testing labs severely crippled the state’s supply of marijuana. Also, a flood of business license applicants – nearly 2,000 – swamped the state’s regulatory agency, the Oregon Liquor Control Commission.

At the time, Grön management made a key decision to proceed with testing, even though state rules were unclear and the first round of standards were almost impossible to meet.

“When the industry was in chaos,” Smith said, “(most) people’s response was not to respond. They just waited in shock, and our approach was to move. We strategically planned out, just as we would a new product, and moved forward.”

Because Grön already had a two-year relationship with Portland-based Green Leaf Lab, it started preliminary batch testing in August 2016 and received state approval in October – before many other edibles makers had even started. The result: Grön chocolates made it to retailers’ shelves in late 2016, where they remained for months without competition.

The first step for state approval was validation of the entire manufacturing process: 24 lab samples had to be pulled from each batch of edibles, and the analysis was then sent to the state for review.

After process validation, random testing began of product for sale. Again, every batch was checked.

Oregon’s tough new rules for potency, pesticides and other contaminants were supposed to set a standard for consistency and quality in the industry. Instead, some observers predicted the changes would cripple the state’s cannabis business.

Smith, by contrast, thought the standards provided clarity and offered “a road map to consistency” – and so were long overdue.

“I came at the industry knowing that there was no way to be successful with edibles unless you could develop a product that is consistent and delivers the same effect time and again,” she said.

The original state potency rules mandated no deviation from the standard of 50 milligrams THC per unit, or 5 milligrams per serving for a 10-serving chocolate bar. Results can vary by cannabis infusion – oil, butter, isolate or distillate – product medium, temperature and sugar content, among other factors.

“It was really, really hard to nail down with a lot of edible products, particularly those that are sugar-based,” Smith said. (The standard has since been revised to plus-or-minus 10%.)

Grön was able to meet the initial stringent standards thanks to its partners Green Leaf Labs and Precision Alchemy, which produces most of the flavorless distilled THC and CBD oil used in Grön’s products.

Grön also relied on other cannabis suppliers and processors in addition to Precision Alchemy.

Smith noted, however, that potency results can vary across labs by as much as 10%, and the other suppliers used different labs to test their oils. So Smith and her team took the extra step of ensuring that cannabis oil from other suppliers was quarantined and then sent to Green Leaf for retesting.

Smith’s advice: “Whatever you budget for testing, multiply it by 10.”

Grön, in fact, spends $20,000 on testing in an average month – and 25% of that budget is tied to two to three tests of products under development. Oregon law requires only that finished products be tested, but interim tests assure Grön that its new products are accurately dosed before they’re submitted to the state.

With a 50-milligram chocolate bar, for example, Grön aims to exceed the standard. That means 47-53 milligrams of THC or CBD at least 95% of the time.

“We are ridiculously accurate,” she said.

Begin With Great Ingredients and Staff

Grön’s edibles begin with good chocolate that is carefully sourced from fair-trade producers.

Rounding up significant amounts of dark and milk chocolate is a tall order for a small company that now goes through 1,500 pounds of the sweet stuff every week.

It helps to be in Portland, a foodie mecca in a state with a heritage of sustainable agriculture. Early on, Smith decided to hire key staff with startup experience in artisan foods to complement the company’s cannabis expertise.

“It’s what we need to look ahead and be prepared for more sophisticated mainstream business growth,” she said.

Grön’s operations manager came from one of Portland’s large organic bakeries, bringing a wealth of vendor contacts and knowledge of precision food manufacturing. Its new sales director knows how to expand a regional business into national markets, having helped grow Stumptown Coffee from “three guys in a garage” into a java powerhouse.

Ingredients are sourced from across the state and sampled again and again.

Grön buys hand-harvested sea salt from the coast, hazelnuts from Melcher Family Farm in St. Paul and blueberries from Corvallis.

“We must have tried 15 different blueberries before we found” the ones we wanted, Smith said.

She and her team did blind taste tests to pick the perfect single-origin coffee bean at the Portland roaster Water Avenue Coffee.

“Their focus is on being weed chocolate and getting people high,” she said. “We want to focus on being a delicious food experience that just happens to have cannabis in it.”

Cannabis trim and flower also are carefully sourced and have Clean Green Certification, a type of organic seal in the marijuana industry. Most of it now comes from Christine and Jasper Smith’s own Skunk Valley Farm in Sandy or East Fork Cultivars, an open-air farm focused on CBD in southern Oregon.

The cannabis is processed into a clear THC or CBD distillate without terpenes, leaving a flavorless oil that provides a consistent dosing profile and blends seamlessly into the chocolate.

Here, too, Smith is picky.

“I have turned down pounds of oil because the terpenes weren’t fully removed and might have a slight flavor,” she said. “We want to know the farm and the farmer, that every part of the product we put on the market has a story we’re proud of.”

Smith said she finds it satisfying to be able to offer a bar made from single-origin chocolate, single-origin coffee beans from El Salvador, and single-origin cannabis. The demand for CBD and CBD/THC blends is leading Grön to broaden its line, using only cannabis-derived CBD to assure potency and quality.

“There’s a lot of not-good CBD out there,” she said.

Even the packaging is carefully considered: a biodegradable, individually packaged, child-resistant box designed by Smith and produced by Oakland, California-based Sun Grown Packaging.

“I’m tired of seeing so much plastic in this industry,” she lamented.