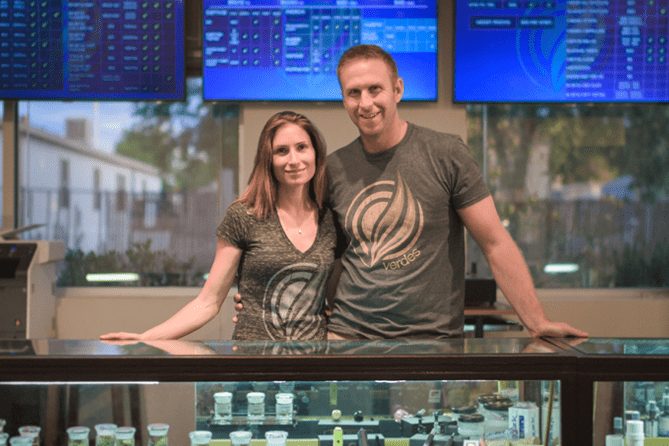 Nor did she plan on becoming a national advocate for encouraging owners of medicinal marijuana dispensaries – and even recreational stores – to have nurses available to answer medical-related questions and provide customers with advice.

But that’s exactly where Speegle finds herself today.

“It’s kind of funny – my original role was more on the cultivation side and I was not involved in direct operations in the store, “ said Speegle, a founder and partner of the Albuquerque dispensary Verdes Foundation. “I was more behind the scenes and on the fringes.”

Now, she works mainly at the dispensary as one of several nurses on staff – a rarity in the cannabis industry. The move has paid off in a big way for Verdes, helping the dispensary boost its patient count, increase revenues and set itself apart from the competition.

Although Speegle had a role in helping start Verdes in 2011, her husband and his father took on the bulk of the daily work and oversight. She kept her job as a cardiac nurse at a local hospital, working three days on with four days off. During her free time, she would head to the dispensary to help out with the family business.
In early 2013, though, she overheard a conversation between an employee and a very sick patient. Speegle was alarmed by the information being dispensed along with the flowers, edibles, CBD and accessories.

“That was a pivotal moment for me,” Speegle recalled. “They were giving out medical information that they did not have a firm grasp on.”

She felt a need to protect patients by providing them with better medical information. With a master’s degree in nursing and as a student of cannabis treatments, she was in a unique position to provide medical advice to patients, many who suffered from cancer and other serious ailments.

“I started tapering off my time at the hospital and started spending more time at the front desk,” said Speegle, a registered nurse (RN) who also is a member of the American Cannabis Nurses Association.

Last year, she quit her job at the hospital to work full time at Verdes.

Since then, the dispensary has another full-time nurse as well as a part-time one. Patients have access to a nurse around the clock, although the one who is “on call,” so to speak, is almost never bothered in the wee hours of the morning or some other inconvenient hour.

Slow to Catch On

Speegle would like to see other marijuana retail stores embrace the idea, and she frequently speaks on the issue at conferences.

Yet few others are following her lead.

“Unfortunately, I don’t know of anyone else who is doing this. It puts us in a unique position. No one else seems to be following suit. We are an island, as best I can tell,” Speegle said.

Hiring a nurse is simply not a prioity for dispensary owners given everything else they’re dealing with, she said. In Albuquerque, for example, competitors believe a better use of their dollars is to hire nurse practitioners and physicians to write referrals for patients.

One reason is cost.

“I’m sure people wonder how they can justify hiring what would be (one of) the most highly paid people on the staff,” she said.

And you can’t just hire retired nurses and expect them to add value to your operation.

“You need a nurse who is current on acute care. You need to have a nurse who knows the medications and who is well-versed on side effects.”

Verdes Foundation pays nurses what they could earn as a starting salary in a hospital in Albuquerque – $32-$35 an hour for an RN and $18-25 an hour for a licensed nurse practitioner.

“But I think we made a mistake in doing that,” Speegle said.

She would advise others to pay less than the market rate for a nurse and use the difference to send the individual to conferences or spend it on training and education. Also, working in a dispensary is less stressful than toiling in a hospital, she said, so a nurse might accept less money in exchange for a better quality of life.

Good Medicine for the Bottom Line

Despite the cost, she said she believes having a nurse on staff helps the bottom line. “Nurses are good for business,” Speegle said.

In the year since she began working as a full-time nurse, business metrics have been impressive at Verdes. From September 2014 to September 2015, the store experienced:

Not all of the increase in business can be attributed to the nursing staff, although Speegle thinks it served a big role in driving business to Verdes.

“We also remodeled during that time period,” she said, making the dispensary brighter, improving displays and making it more inviting.

For a dispensary wishing to have a nurse available, but wanting to keep a lid on costs, it is not necessary to have full-time nurses on staff like Verdes does, she said.

“I recommend maybe having just one RN who comes in twice a week and provides education to the staff and deals with some of the more complicated cases,” Speegle said.

She also would like to see a licensed practical nurse at the front desk of marijuana stores. “I think we need to get away from budtenders all together,” she said.

She also recommends having a licensed practical nurse available to answer questions, no matter what the time of day or night. Clients appreciate having a number to call if they have over-medicated or are having a bad reaction; however, it’s rare that Verdes gets a late-night request.

Speegle said another reason that marijuana stores may be reluctant to have a nurse on staff is because of potential legal liability associated with providing medical advice for a substance that remains illegal at the federal level.

Still, she advocates not only having a nurse available in medical marijuana stores, but in stores marijuana is legal.

Even adults taking marijuana for recreational use will have many medical questions, she said.

“They need the input from a trained medical professional,” Speegle said.