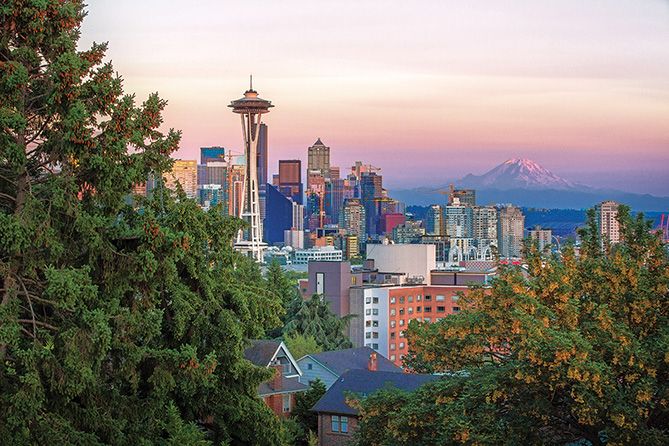 A half-decade ago, Washington state’s cannabis business owners took the reins of the country’s second recreational marijuana market behind Colorado, and they’ve learned plenty from their mistakes in that time.

Washington state began sales of adult-use cannabis July 8, 2014. Since then, the pioneering executives have passed over many bumps in the road, including falling wholesale prices and difficulties with regulators.

Marijuana Business Magazine surveyed several Washington state business owners to find out what they’ve learned over the years and what they would do differently if they could go back in time.

“I would probably warn myself that the Washington State Liquor and Cannabis Board (LCB) isn’t an ally,” said Bob Ramstad, owner of Seattle-based OZ. Recreational Cannabis. “I would probably also remind myself that there will be other licensees that are not detail-oriented or rule-following, and that’s OK; they are just different than us.”

Diversify, But Don’t Bite Off More Than You Can Chew

Some business owners say in retrospect they would have tried to do less with their company, such as focus only on cultivation, while others suggested adding revenue streams within their single specialty rather than branching out into something entirely new.

At Arlington-based Washington Bud Co., CEO Shawn DeNae originally thought that a successful approach would be to cultivate cannabis for flower sales as well as processing and infused products to expand her brand’s reach.

“I was wrong,” she said of that initial strategy.

“We partnered with the wrong people who failed to follow through on several levels,” DeNae said. “This attempt to establish three licensed businesses cost vast amounts of time, money and heartache.”

Jeremy Moberg, the founder and CEO of Riverside-based CannaSol Farms, said that, given a second chance, he would not have chased after the oil market by trying to create cartridges for vaporizers.

“The technology changed so fast, and cartridges were so bad for so long, that it seemed like we were throwing failing cartridges away all the time,” he said. “I give myself a little slack because none of these processes were standardized, and we were inventing operations at scale in real time.”

If You’re Going to Branch Out, Stay in Your Comfort Area

If Jim Makoso, vice president of Seattle-based Lucid Lab Group, could go back in time, he would tell himself not to focus on just one revenue source.

“Develop multiple revenue streams inside the extraction space,” he said. “We’ve iterated to this over time, and it has proven to be critical in our development as a business.”

One of Lucid Labs’ main revenue-driving business units is its Process Solutions vertical, which provides processing equipment to cannabis companies. Makoso said the unit grew “organically” out of the core business of infused product development.

In the process of generating new products, the need for improved capital equipment solutions led Makoso and his team to engage with equipment manufacturers. Together, they created new capital equipment tailor-made for cannabis processing.

Other business owners say they wouldn’t have set up shop in Washington state at all—or they would have entered the hemp space instead or charged more for their services.

If given a do-over, Kara Bradford, CEO of Seattle-based Viridian Staffing, would have launched her company in Colorado instead. But by then, it was too late. So she pivoted.

“Washington’s bumpier rollout and original ban on third-party staffing providers made it more challenging to achieve early traction,” she said. “Thankfully, we were able to keep the bills paid by servicing other vanguard ancillary firms active in Washington and Colorado.”

By “vanguard,” Bradford means other pioneering companies that jumped in early in Washington state, including Eden Labs and BioTrackTHC.

For about a year and a half, the LCB required all plant-touching workers to be direct employees of the licensed business, which made third-party temp staffing solutions unlawful, according to Bradford.

“While some less-scrupulous, fly-by-night firms were happy to skirt the regulation, putting their clients’ licenses at risk, we were not,” she added.

“It wasn’t until the LCB changed the regulation and we received confirmation of that change did we roll out our temp staffing solutions in Washington,” Bradford recalled.

Viridian Staffing provided direct-hire recruiting to many of those firms but had to leave a lot of temp staffing opportunities on the table by insisting clients operate within the law.

“The rollout of I502 (the ballot initiative legalizing adult-use cannabis) was kind of a mess as well, so we were able to keep the lights on, in part, by servicing other ancillary firms while the direct plant-touching firms were working through the licensing process and building out their facilities,” Bradford said.

“Had it not been for some of these ancillaries, we might have been ‘too early’ to survive.”

Steve Fuhr, managing member of Shelton-based Toucan Farms, said he would have taken his time, money and hard work and applied it to the hemp industry—a move he eventually did make.

Fuhr attended a cannabis conference last fall where about 20 owners of Washington state-based cannabis companies said they hadn’t taken a salary since Day One.

“I’ve made more money in hemp in six months than I made in the past five years of legalized cannabis,” Fuhr said.

Targeting his analytic services to growers at a bargain rate was a mistake, said Jim MacRae, owner of Seattle-based Straight Line Analytics. He recognized cultivators were operating on thin margins and would have difficulty justifying “noncritical” expenses. So, by offering his services at a bargain price, he set unreasonable and unsustainable expectations for what his services should cost.

“That taught me to never underprice the value of the services you offer,” MacRae said.

To get out of the unfavorable situation, MacRae didn’t renew the package in question and decided not to offer such deals going forward.

Instead, he reverted to his core business model of charging an hourly rate.

“I also started paying more heed to the advice of my spouse and a good friend in the industry who had both advised me against making the ‘socialist’ offer in the first place,” MacRae said.

The proportion of revenue coming from farmers has been relatively low throughout his time offering services to the industry, and it declined after he decided not to renew the offer.

To adjust, MacRae introduced a pricing option for jobs that he anticipated to be ongoing and fairly demanding of his time. He offered a very small discount from his base hourly rate for clients willing to pay him upfront for a 13-week period based on an agreed-upon number of average weekly hours that were anticipated for the upcoming quarter.

As he begins to do more work for non-Washington state companies, he offers fixed-price contracts for well-defined jobs where he can effectively estimate how much of his time and other resources the job will require.

“That seems to be a popular option for my out-of-state clients,” MacRae added.

The direction and focus of your business can change over time, so having control from the outset as well as clear goals can help to prevent rifts with your partners.

Ryan Abernathy started Seattle-based Xtracted Labs with two partners and had a third come in shortly after. At this point, he has bought all of them out and is the only shareholder at Xtracted, as well as his intellectual company, Traction Holdings.

He recommends putting in place a clear operators’ agreement with any business partners to protect and prioritize the wellness of the business.

“In the beginning, it can seem like everyone is on the same page with the same intentions,” he said. “Time, the required work for a startup to be successful, and situations can change that.”

Because of nondisclosure agreements, Abernathy declined to provide details regarding the individual situations.

“I will say that over the years it takes to build a stable business, people’s individual hopes, goals and dreams may vary or drift apart from the original mission,” Abernathy said. “It is important to include provisions to address this in your original operators’ agreements.”

The provisions should range from how disagreements get settled to what happens if a partner wants to move on—or even what happens in the event of the death of a shareholder.

“It’s easy to download generic documents and save a bit on a lawyer, but this may end up costing you huge down the road, depending on how your business evolves,” he added.

From the start, Abernathy tries to imagine best-case scenarios, worst-case scenarios and anything in between, then address those in writing via an agreed-upon contract, operators’ agreement or other legal document.

“Communicating these potential outcomes with individuals can be challenging, but it is always an easier conversation to have when things are going well up front rather than down the road,” Abernathy said. “These days, I am much more prudent when entering into any kind of deal, let alone partnership.”