Want to post a video on YouTube about your new marijuana store? Or maybe run a special offer on Twitter? Interested in placing ads on any media that target the out-of-state tourist market? Under Colorado’s retail marijuana rules released earlier this month, all of these types of advertising would be against the law.

These restrictions are noteworthy on a national scale because other states may very well copy them someday. And they may affect policies for national consumer cannabis media.

Based on the limitations, retail establishments catering to recreational (adult) consumers could be limited in how large and how quickly they grow.

Under the published rules, advertising that will not be allowed includes:

So, what’s left for a budding cannabusiness entrepreneur wishing to highlight their retail establishment to the consumer market?

Entrepreneurs will do well to start building their own targeted customer email lists as part of their marketing plans. Emailed offers to a proprietary email list may be fine, as long as a demonstrable barrier has been placed in front of any online sign-up form requiring that all opt-ins be over 21.

Look to cannabis-specific sites such as WeedMaps and Leafly. These organizations are poised to be the big winners from these rules – provided they re-implement their “21 and over” barrier buttons. Advertising on those sites would be permitted under that scenario.

Purchasing sponsored links on sites such as HighTimes, which are not over 21-protected, may still be an option. If pursuing this scenario, entrepreneurs should consult legal advice as to whether an “over 21 only” button is needed in front of their own site or landing page.

Although Google and Facebook ads would probably be allowed because they can be targeted by age and geographic location, Facebook itself has been turning down marijuana-related ads even for ancillary businesses, such as ones for the National Marijuana Business Conference & Expo.

Also, branded t-shirts, hats and other apparel are not mentioned in the rules and thus are currently allowable. However, chances are they could be nixed in future because they are banned under federal tobacco advertising laws, which Colorado legislators may review.

Some commentators have wondered if these rules could be struck down with a court challenge based on the Colorado constitution’s famously strong free speech clause. But, if that occurs, it will be far in the future. In the meantime, Colorado retailers need to place ads very carefully.

New Jersey Agrees to Loan a Dispensary $357,200 – History in the Making 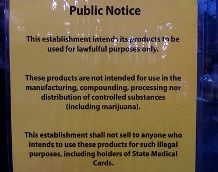