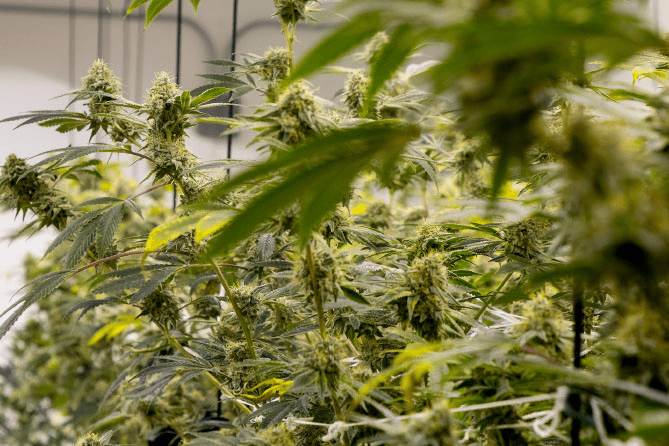 Brian Leddy has an eye for detail.

When not tending cannabis plants at Red Barn Growers in Gallup, New Mexico, Leddy is out in the field serving as a professional news photographer.

At Red Barn, Leddy’s eye for detail helps him spot problems like bugs or mildew. Leddy – who is the company’s head grower – can also better calibrate the plants’ feeding needs or tell whether an individual plant is a “good eater” and absorbed a lot of the nutrient solutions he feeds them.

Leddy believes it’s a lot easier to pay individual attention to a plant when its size is manageable – in other words, not too large.

Along with reducing plant size, Leddy experimented and ultimately adjusted how and what he fed them. He also found ways to reduce light-generated heat, too much of which can damage a plant.

“It was definitely tough at first. It took a lot more precision, a lot more thinking, and a lot more paying attention to the details of everything that was happening. It took us a couple of months to get everything hitting,” Leddy said. “But eventually it all came together and I’ve been extremely happy with the quality of the medicine we’re producing.”

Going Against the Norm

In New Mexico, cultivation of smaller plants goes against the prevailing norm. Because the state caps the number of plants at a grow site at 450, many cultivation operations let their plants grow taller over a longer period to boost yields.

But Leddy believes keeping plants relatively short allows for certain efficiencies that are more difficult to achieve with taller plants. And, with certain techniques, shorter plants can produce yields similar to those of larger plants.

When Leddy joined Red Barn in January 2014, about 13 months before the state increased the plant cap to 450 from 150, he didn’t have plans to modify anything. But that changed after a few weeks.

“We saw there was a lot of need for improvement, and an opportunity for growth and improvement of the overall quality of the product we were putting out,” Leddy said.

For starters, Red Barn grew plants in two rooms. By Leddy’s estimates, one was about nine feet by 20 feet and the second was around 26 feet by 20 feet. While the rooms were small, the plants grown there were five- to six-feet tall.

“We had these really large plants that would yield great. But a lot goes into maintaining those bigger plants,” Leddy said. “I felt that growing smaller plants would be slightly more efficient even though our plant numbers were already close to the cap.”

Regular tasks that are harder to achieve with bigger plants include staking the plant and getting good airflow to the plant center, Leddy said. Smaller plants, by contrast, simplify oversight and make it easier to inspect the plants and give them individual attention.

“That’s what I love about it. I can walk through a room. I can get underneath the plants. I can pull a leaf from the very bottom of the canopy and I can look at it. I can take it and put it under a microscope and see if there are any problems with bugs,” Leddy said.

“With really large plants, you just couldn’t move through the room as easily,” he added. “It’s not any less labor intensive. I just feel it’s a little more organized than a room full of plants where branches are flopping all over.”

Leddy uses different techniques at different stages of the plant’s growth cycle to get it to grow out rather than up.

For example, once a plant starts to vegetate after three or so weeks it will usually have four to eight branches. At that point, Leddy likes to “pinch” the tips of each of those branches, and will do that every week or so up until about a week before the plant goes into flowering mode.

“That will cause all that lower growth to start coming up and bushing out. So what you end up with is this really, really dense bush,” said Leddy. “You’re not going to get a ton of big giant flower, but you’ll get a lot more medium-sized flowers with that technique. Of course, every strain is going to react differently.”

Leddy organizes his rooms so that three or four plants are enclosed in a 4-foot by 4-foot screen. If the plants tend to stretch and grow tall, Leddy will put more screen over the plants, and then bend the top branch so that it won’t go through the screen but instead grow horizontally.

It stands to reason that achieving shorter, fatter bushes is easier with indica strains because they grow that way normally, while sativas grow taller and skinnier. But just about all the 28 strains that Red Barn grows are hybrids, Leddy said. How they grow is harder to predict. For example, indica dominant plants still might stretch, while sativa dominant plants might get bushier, Leddy said.

For example, after feeding a plant with a nutrient mix it takes time for the “root zone” of the plant to dry out. That drying period takes more time in larger pots and less time in smaller pots, meaning the plant can be fed more frequently. Leddy said he can feed his plants in the smaller pots a slightly weaker nutrient solution three times a week, compared with feeding them a slightly stronger nutrient solution twice a week.

“We felt we got to be a little bit more precise and could really figure out which plant needed to eat and which plants didn’t like as much food by feeding three times a week,” Leddy said.

“It’s a lot tougher, but in the end the overall quality of our medicine has just been so much better,” Leddy said.

When New Mexico raised its plant cap to 450 last year, Red Barn initially hoped to move to another facility. But the company couldn’t find a suitable one that also was affordable.

“In the end we realized we need a little bit more time to build up some working capital,” Leddy said.

Because Red Barn couldn’t move to larger digs, it opted to make its current facility bigger.

“Once those plant counts changed we really started looking at how we could squeeze more plants out of the space we were using to grow,” Leddy said. “We sat down and thought about efficiency and how you could make those numbers work.”

The company ultimately built a third grow room that is 20 feet by 24 feet. The ceiling is just seven feet high.

The low ceiling means heat from the lights are closer to the plants – possibly close enough to damage them.

To fix that, Leddy purchased so-called ventilated lights. They‘re essentially lights with vents at either side to which a flexible duct can be attached. A blower sends the heat from the lights through the ducts and out the building.

Because Gallup’s elevation is around 6,500 feet, temperatures can get cool and Leddy has heaters as well. As for humidity, he never lets it get above 50% and instead aims for about 40%.

“It’s amazing how much heat you can suck out of a room just by isolating it to the hood and then pushing it out,” Leddy said. “In the long run it was a no-brainer just because the amount of heat we could dispose of without having to run an air conditioner. And the savings of not having to cool that room are pretty significant.”

“Unfortunately, it’s not easy for us to find an existing facility,” Leddy said.

But perhaps his keen eye will spot something.