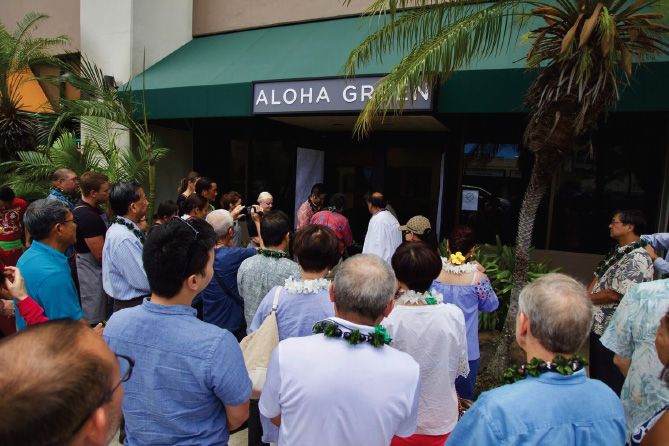 But the state’s program has moved forward in fits and starts since then, forcing Aloha Green and Hawaii’s seven other vertically integrated MMJ businesses into a holding pattern. As of June, the market had still not launched.

These kinds of regulatory delays are common in new markets – but lean and strategic businesses can expertly navigate them to stay on course.

Aloha Green is a prime example. It doubled down on patient, physician and media outreach, market research, phased construction plans, and employee training and retention. The team’s strategy supported its central goals: to sell the state’s first legal cannabis in its dispensary and position the brand as a leader in the market, said Tai Cheng, chief operating officer at Aloha Green.

“We’re focused on becoming a thought leader and resource pool for patients and physicians before dispensaries open in order to build relationships, trust and familiarity with our brand,” Cheng said. “There isn’t any real mainstream, leading source of (medical marijuana) information for Hawaii’s patients, so we’re trying to establish that before sales begin.”

During regulatory delays, contact with patients and physicians is critical, Cheng said. Patients will be your customers, and doctors are responsible for recommending MMJ as a medication.

“There’s so much work to be done,” Cheng said. “All it takes is old-school legwork, phone calls and showing up when and where you say you will.”

Cheng advised using the downtime to create a community outreach plan as well as educational material to share with patients and trade associations that represent doctors, senior care facilities and pain management clinics, he said. Also, tailor information for caretakers, veterans, seniors or patients with specific qualifying conditions or symptoms for MMJ.

Aloha Green, for example, wrote a patient handbook for its license application and shared the material on its website. It also created a newsletter patients can subscribe to, a handy marketing tool in a state that bans MMJ dispensaries from advertising but doesn’t clearly define what constitutes advertising.

Media outreach also is important and can be done before the market opens. To get in front of audiences, Cheng’s team timed its media releases for news cycles and sent information to news outlets through a separate mailing list. The executive team also made it a priority to take most interview requests to build brand recognition.

Social media still poses a challenge, given that companies such as Facebook and Instagram have closed cannabis accounts. So Aloha Green avoided sharing photos of cannabis online. Instead, it used its social media channels to promote its patient education materials and to share information.

When faced with a delay, be careful how fast you move and how modular you are with your infrastructure and planning, Cheng advised.

You don’t want a stranded asset you can’t use, he said. For example, a 20,000-30,000-square-foot grow might not serve your best interest, particularly during regulatory delays. If a part of the facility is still under construction, the incomplete asset can be of little use.

Aloha Green phased the construction of its production facilities and storefront to be mindful of delays and still be first to market. It prioritized a small indoor nursery and its first dispensary location, and the company focused on meeting code requirements before expanding.

In May, Cheng estimated the phased construction of its grow and dispensary gave Aloha Green a three-month lead on the competition, meaning it was well ahead of its goal to sell the first legal cannabis in the state from its dispensary.

“We pushed hard and leaned forward with construction, and when we knew delays were coming, we laid off the gas a bit,” he said.

Like any new business, he advised, budget carefully. If you employ a phased approach to construction, it’s less likely you’ll sit on an asset that isn’t complete, or delay completing an asset because you don’t have the need or demand for it.

Take the time during a delay to perform valuable market research so you can properly budget and forecast as well as calculate a rate of return for investors. Market research is also helpful to show investors how you plan to compete with the black market, and it can be used to temper investors’ expectations. Oahu has an active black market and the lowest number of MMJ patients per capita in Hawaii. Patients on the island can also grow their own medical marijuana or have a registered caregiver grow for them.

Taking that into consideration, it’s critical to use a conservative estimate to plan for the number of patients you might serve, Cheng advised. So his team crunched the numbers beforehand to be prepared to go once the market opened.

For starters, look carefully at your state’s patient registry and the total number of patients in your region, and track the registry’s growth over time.

The Aloha Green team estimates 50% of Oahu’s patients will continue to grow their own product or work with caregivers to supply their medicine, while the dispensary will serve another 20% of the patient population on Oahu. It planned its production appropriately to keep shelves stocked the first weeks and months it opened.

Aloha Green also considered the cost of growing with a caregiver and black-market prices for cannabis when it set its price points. And it considered state regulators’ concerns about product diversion.

The average cost of a gram on the local black market is $15-$20, so Aloha Green priced its grams at $15-$20. But it’s difficult to predict how the black market will react and how its prices will compare to dispensaries. Already, Cheng said, there have been black-market Craigs-list posts advertising $12 grams.

Median prices in other markets weren’t as helpful to setting price points because Hawaii has unique factors that increase the cost of growing – high costs for electricity, water, sewage and shipping as well as a limited number of testing laboratories.

Use Delays to Prep Your Grow

A successful retail strategy depends on having product to sell. Regulatory delays to cultivation are costly, but you can use them to your advantage.

While you’re waiting to get the green light to grow, take the time to run tests on critical systems in your facility and fully prep your cultivation site.

For example, Aloha Green used the time during delays to:

If you can, retain talent by avoiding layoffs when a market launch is delayed. It’s often easier and cheaper in the long run to keep experienced, trusted employees on board versus hiring new, untested talent.

One strategy to retain your employees is negotiating lower salaries and building incentives into pay.

Cheng also stopped hiring but continued accepting employment applications and resumes so he was ready to start bringing new employees on board when business kicked into gear.

“The pool of excellent candidates is only so big and we want to have first shot at them,” Cheng said.