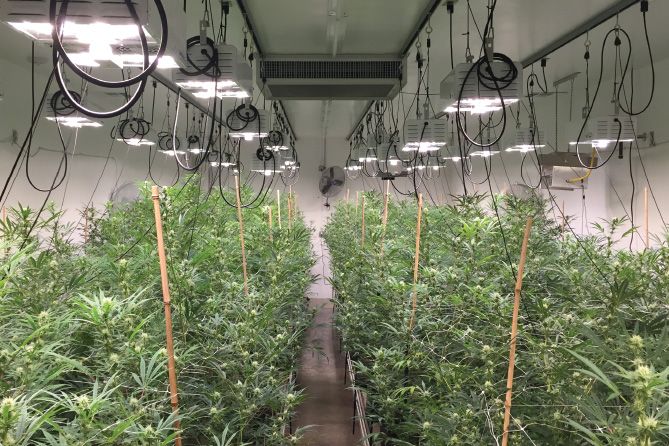 Traditionally, marijuana cultivators have used high-intensity metal halide (MH) and high-pressure sodium (HPS) lights on their crops. But as the price of energy-efficient, light-emitting diodes has fallen, many in the industry are experimenting with how LEDs affect cannabis properties such as flavor, aroma and THC.

Some initial results suggest LEDs can have a beneficial impact, a finding that could influence how cannabis cultivators use this emerging technology.

Silver State Relief in Sparks, Nevada, is one cultivation company that has put significant time into studying LED lighting.

“We’ve found that we consistently get higher total THC and terpene content under full LED lighting” versus more traditional lights, said Daniel Hopper, cultivation manager for Silver State Relief. “We see that trend for a number of genetics, and we’re trying to figure out why that is.”

Hopper, who earned a Ph.D. in biochemistry from the University of Nevada, Reno, has been researching the effects of LEDs on cannabis production in the company’s 10,000-square-foot growing space. He has set up rooms with full-on LED lighting as well as what he calls “checkerboard” or “hybrid” lighting consisting of double-ended Nanolux HPS fixtures as well as LEDs.

Hopper has been experimenting in particular with the lights’ effects on cannabinoids as well as terpenes – the fragrant oils that give cannabis strains their distinct aromas and flavors. In addition to taste and scent, terpenes provide plants with natural protection from bacteria, fungus, insects and other environmental stressors.

Here’s a look at Hopper’s approach to studying LED lighting and what his team has discovered:

Hopper has found that after a certain point, there’s no significant increase in THC content, while terpenes increase later in the growth cycle in much the same way that wine grapes mature. Just like with wine, terpenes add complexity to cannabis, creating a depth connoisseurs appreciate. Following that logic, Hopper applies the various techniques used for growing wine grapes to his cannabis plants.

“We are in the process of performing experiments in which we harvest flower at different time periods of development and track cannabinoid and terpene levels in the plants,” Hopper said. “This will allow us to see any trends in THC production and if there is a plateau or time at which THC no longer increases. Terpenes can come on very late in grape production, so I want to see if the same thing is happening in cannabis.”

In addition to using less energy than traditional lighting, LEDs emit specific wavelengths of light that can be fine-tuned to a plant’s particular stage of growth, whether it’s in the vegetative or flowering state.

By comparison, traditional MH grow lights tint blue and appear to induce a plant to grow leaves. HPS lights tint orange and help the plant flower. But both MH and HPS lights convert much of the energy they use to heat rather than light, meaning even more energy is expended to cool grow rooms.

Both lighting characteristics can be replicated with LEDs, allowing growers to precisely adjust the light spectrum to the plant and its growth stage.

Through experimenting with the different spectrums, Hopper has determined that blue light treatment late in the flowering process will stimulate terpenes, much like blue light stimulates terpene syntheses in grapes, basil and tea leaves.

Hopper believes there are parallels between cannabis and wine that apply to lighting.

“The only way sugar will increase any more in a grape is by leaving it on the vine,” Hopper said. “In wine grapes, aroma and terpenes come on late and ramp up toward the end of the harvest. I have this idea that the same thing may be happening in cannabis. I think we can enhance the overall aroma and flavor under full LED.”

But the story is complicated, and genetics seem to play a key role. Evidence suggests that full LED lighting prompted an increase in the overall terpene content of Silver State’s Bio Jesus, Dream Star and Berry White genetics. The same experiment, however, revealed no difference in terpenes for Island Sweet Skunk. And with Bio Jesus, the blue light produced a slight decrease in total THC.

“There are still many questions to be answered, and it starts to get very complicated, but we are trying to tease out all of these genetic differences,” Hopper said. “We are also trying to determine the optimum length of blue light treatment.

“But there’s a huge genetic component, too. We see an overall increase in terpenes with some genetics and blue light, but not with all of them.”

How Long is Too Long?

And there’s the question of timing. One of the biggest debates is over the optimal time to harvest a plant. The longer the plants grow, the more developed terpenes become. But that also cuts into the number of harvests Silver State produces.

“Maybe we can push the plants 10 (extra) days to 14 weeks, but if we do that in every room, we lose two to three harvests a year. That’s hundreds of thousands of dollars of product we’re missing out on,” Hopper said. “We have to analyze what the labor cost involved is as we continue to push these rooms longer.”

Hopper contends terpenes in cannabis haven’t been sufficiently studied and admits that even his own experiments are limited. Without proper R&D space, he’s had to keep his experiments small and “safe” to protect the company’s sellable product.

“Because of my research background, I have to do things a number of times to be able to say it’s statistically significant,” Hopper said. “It takes a while to get the replication I want.”

Research conducted by Silver State’s LED provider, LumiGrow, found that eliminating red light for the final three days of production increases the amount of terpenes in dried cannabis flowers, though there is some variation within varieties. Heavy blue light drives terpene synthesis but decreases the overall growth of flowers, so LumiGrow recommends using that setting only during late flowering, roughly 48-96 hours before harvest.

In his own experiments, Hopper has found that a cannabis plant’s yield is only slightly higher under LED lighting, but he says yield is largely dependent on genetics.
“The yield is essentially identical,” he said. “We’re able to get the same yield in our full LED rooms compared to our hybrid rooms.”

Still, the energy savings realized by growing with LEDs is significant.

With their elaborate lighting and ventilation systems, indoor marijuana grows are notorious for draining energy. In a society that’s become increasingly eco-conscious, saving energy is important to the industry’s image. LEDs are up to 40% more energy efficient – and thus cheaper to use – than their more traditional counterparts, such as HPS lights. Silver State, for its part, has found that LEDs consume 29% less energy for its crops.

“Overall, we’re definitely saving money with regard to our electricity consumption,” Hopper said.

That’s on top of the fact that LEDs can also produce better-quality plants – a bonus that can give cannabis growers an edge over their competitors.