Shares of several publicly traded companies that serve the medical marijuana industry have surged in the wake of a watershed election that saw huge gains for the cannabis industry.

Investors pumped money into the sector after Colorado and Washington legalized cannabis for recreational use and Massachusetts passed medical marijuana legislation. Some MMJ-related stocks hit new highs and experienced record trading activity, with millions of shares changing hands vs. tens of thousands on a typical day. That’s particularly impressive given that the overall stock market plunged after the election.

The initial euphoria has subsided somewhat today, with a handful of MMJ stocks coming down a bit this morning. But the increased investor interest in cannabis bodes well for the future of the industry, which could grow by leaps and bounds over the next year. Dozens (if not hundreds) of retail marijuana stores could open up in Colorado and Washington, while nearly 200 dispensaries are on tap for new MMJ states such as Arizona and Connecticut. Given that landscape, companies that provide products, technology and services to this industry could see sustained gains on Wall Street.

Here’s a wrapup of some of the biggest movers over the past week:

(Note: Most MMJ-related stocks trade on the over-the-counter market and have miniscule share prices at this time, so they’re subject to significant swings and high volatility.)

MedBox Inc. (MDBX): One of the most promising publicly traded companies in the MMJ space, MedBox has seen its shares jump 64% over the past week. The company’s stock is currently trading at a 52-week high of around $4.75, up from $2.90 on Nov. 2. At this price, MedBox has a market cap of $52 million. Aside from the election, the company – which provides automated cannabis dispensing systems – also announced positive financial numbers for the third quarter, including record revenue of $1.3 million.

SearchCore Inc. (SRER): SearchCore – which operates a handful of media, technology and marketing MMJ companies, including WeedMaps – jumped 65% from Nov. 5 to Nov. 7 on a surge in trading volume. It’s shares have fallen a bit since then to around 44 cents but are still up 42% from their preelection level.

GreenGro Technologies Inc. (GRNH): Shares of this hydroponics company tripled in the days after the election, rising from 3 cents a share to 9 cents on Friday, when trading volume hit a record of 11.6 million (its average trading activity is 90,000). Its shares have fallen below 7 cents today but are still up significantly from a week ago.

Cannabis Science (CBIS): MMJ pharmaceutical company Cannabis Science rocketed 80% last week to hit 9 cents a share. It is down to around 6 cents today but is still up from a week ago.

Tranzbyte Corp. (ERBB): This company, which provides support services to dispensaries and other medical cannabis businesses, has seen its shares more than double over the past week. They’re currently trading at about .7 cents a share, up from .3 cents a week ago.

Several MMJ stocks, however, have not benefited from the election-related developments, while others saw their initial gains evaporate. They include FusionPharm (FSPM), which is flat since election day and down roughly 35% from its 52-week high, and Hemp Inc. (HEMP), which is trading at the same level it did before the election. Medical Marijuana Inc. (MJNA) rose nearly 30% but is now trading below its preelection price, while London-based GW Pharmaceuticals (GWP.L) is down 6% from a week ago.

National Marijuana Business Conference Leader to Cannabis Industry: ‘There is a Tsunami Coming’ 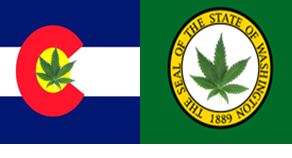