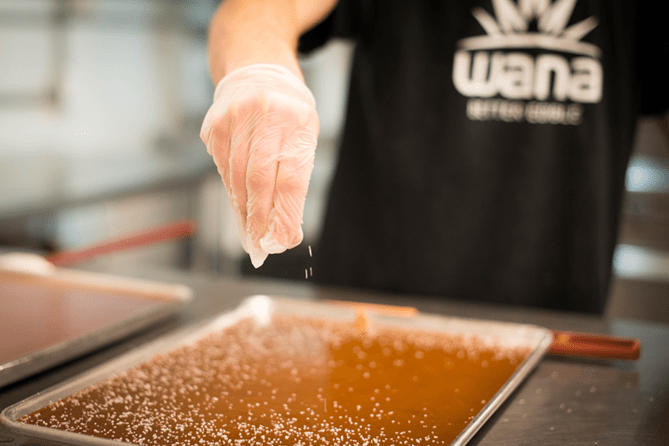 Getting a jump on regulations, developing a blueprint for new product lines helps Wana Brands thrive

When Nancy Whiteman launched the infused products company Wana Brands in Colorado five years ago, the marijuana industry was a completely different animal than it is now.

“There was not the level of regulations 5.5 years ago as there is today,” said Whiteman, who co-founded Wana with her husband at the time. “For example, there was no seed-to-sale tracking.”

Since then, Colorado has introduced scores of new rules for marijuana businesses, including, of course, seed-to-sale tracking. And the state’s recreational cannabis program is even more intense on the regulatory front.

Wana Brands has navigated the regulatory changes well, growing from two employees when it first started to 75 currently. It also has an extensive line of medicinal and recreational products, including edibles, drinks, concentrates and what the company claims is the industry’s first extended-release cannabis capsule. Today, Wana’s products are found in more than 400 of the 480 dispensaries in Colorado.

The company is now embarking on the next phase of its growth: national expansion.

In the first quarter of this year, Wana plans to enter Oregon and Nevada, part of a larger effort to develop a national cannabis brand.

Here are some lessons Whiteman learned along the way.

Get a Jump on Regulations

Despite the relatively loose regulatory environment when the company started, Whiteman and her team have always done more than the state required.

This approach proved critical, making it much easier for the company to adapt to new rules and unexpected regulations. Some of Wana’s competitors and other cannabis companies in general struggled to meet these new rules – from both a logistical and financial perspective – and ultimately went out of business.

“There was no requirement for testing products when we started,” Whiteman recalled of Wana’s early days. “But we tested every batch of tinctures. We wanted to know exactly how potent everything we sold was. It was important to always test every batch of tincture because that was the only way we could be certain of our dosing.”

Doing that before it was required allowed Wana to develop a strong reputation for consistent products at a time when other companies were “all over the board” in terms of dosing, she said. It also helped Wana prepare for mandatory testing.

So what’s the company doing now to stay ahead of potential regulations? Wana has hired an operations director who is implementing Good Manufacturing Practices (GMP) and Hazard Analysis Critical Control Point (HACCP) food safety standards in the company’s manufacturing facilities.

“We want to be in compliance with the most stringent guidelines for quality and safety,” in part because it leads to better products and more efficient operations, Whiteman said.

Taking these steps will help it adapt to unforeseen regulatory changes down the road.

“We anticipate the day when stricter federal guidelines will be the norm, and we want to be ready and to be leaders in the industry,” Whiteman said.

Whiteman said executives in the cannabis industry today must be proactive and become involved in the rule-making process early on.

“Be part of the decision-making rather than sit back and hope it will turn out the way you (want),” she said.

One way to do that: join industry groups and stay informed. Wana, for instance, is a member of the Cannabis Business Alliance (CBA), while Whiteman is on the executive team of a local chapter of Women Grow.

Getting involved helps you stay in the loop enough to know what’s coming down the pike, which in turn gives you ample time to prepare for the inevitable changes.

“There are many benefits,” Whiteman said. “CBA membership gives us a seat at the table with (state marijuana officials) so that we can part of the process of shaping regulations that work for consumers and the industry and so they can hear our concerns.”

At CBA meetings, she has also heard “nuances of regulations” that she might have missed or misinterpreted. That allows Wana to stay in compliance with regulations. It’s also a good way to get to know peers in the industry.

“We have a lot of healthy ‘co-opetition’ where we help each other with resources and support, while still competing fairly in the marketplace,” she said.

It’s also important to keep in mind that the cannabis industry is not the only one that must meet a host of regulations.

“Even though this industry is highly regulated, there are many industries that are even more regulated and have additional federal agency oversight, such as FDA requirements,” she said.

The cannabis industry can learn from businesses in these highly regulated industries.

“We try to look to the standards that other industries are held to that are higher than our own and to move towards them, anticipating the day that the bar will be set even higher,” Whiteman explained.

Wana has looked at pharmaceutical, supplements and food manufacturing businesses in particular. The company’s executives put into practice what they learned by establishing an internal document and process control system that validates all products. That prevents any unintended changes to product specifications, formulations, standard operating procedures and labels, according to Whiteman.

Implementing these practices also reconciles the information “top to bottom,” as is currently mandated by the FDA for all drug supplement and food manufactures.

One way to grow is to offer new products, but launching a new line can be filled with potholes.

Whiteman has specific protocols for launching a new product line to ensure she doesn’t get tripped up.

Along these lines, she recommends:

It’s also important to make sure the product is in your wheelhouse. Even for cannabis industry veterans, there is a danger of getting too far afield from your core business.

“You need to be clear about why you are pursuing something from a strategic point of view so you don’t spread your resources too thin,” Whiteman said.

Pull the Plug if Needed, and Know When to Seek Help

Sometimes you might need to discontinue a product, which can be a tough – yet necessary – decision. Executives often hesitate to abandon an underperforming product because they have put so much time and money into developing it.

But successful companies know when to throw in the towel.

If sales fall below Wana’s weekly threshold for an extended period of time, the company pulls the product. And while it might be hard to realize the product was a mistake, you must analyze it dispassionately.

“It’s a distraction to have your facility producing a lot of SKUs that don’t sell well when the time could be put into manufacturing and refining your more popular products,” Whiteman said.

In fact, refining a product might make more sense than introducing a new one, especially if you already have a strong following for that product.

For example, Wana had included watermelon gummies in multi-flavor packages of its products. Rather than introduce a whole new flavor, it began selling the watermelon gummies as a stand-alone product. The watermelon offering took off more quickly than any other new product the company has ever introduced, Whiteman said.

Because developing edibles involves manufacturing, Whiteman and her then-husband – who had been a city planner – quickly concluded what they were trying to do “was beyond our skillset.” So they hired a professional manager with a manufacturing background. He also had extensive experience in the supplement business and was a biochemist by training.

“He introduced Good Manufacturing Processes and really overhauled our operation,” she said.

If, like Wana, you are going to operate in more than one state, prepare for a new level of challenges.

Having someone whose sole job is keeping track of the rules and regulations – and making sure you are following all of them – is crucial.

“Make compliance a priority with a competent in-house person and also have additional outside resources that you can call on for advice and third-party audits,” Whiteman said. “There are so many rules and regulations that it is hard to keep track of all of them and you need help.”

And it’s a given that you’re going to face unexpected challenges – not only in the realm of business in general, but particularly in the cannabis industry.

“Put aside some money,” Whiteman said. “And find a good therapist…just kidding.”