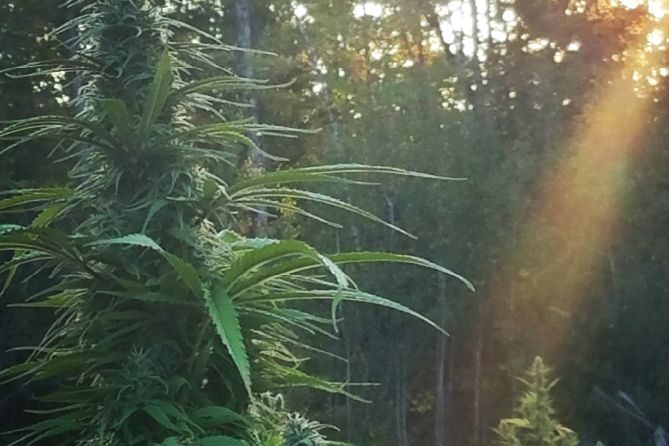 When Mark Simpkins moved from Austin, Texas, to southern Oregon a few years ago, his lack of cultivation experience may have been his greatest asset. Why? He never learned to grow marijuana using synthetic nutrients. Instead, Simpkins started with a clean slate, teaching himself how to make and use his own homemade organic nutrient mix.

“I see it as a blessing in disguise because I was never put on a bottled nutrient. I was told from the beginning that you can make all your own,” said Simpkins, CEO and chief cultivator at Sacred Flower Farms, a combination outdoor and greenhouse grow with about 1,400 plants amounting to about 20,000 square feet of canopy.

The cultivation facility also is close to being a closed-loop grow, where almost all the inputs – including nutrient mixes, soil additives and pesticides – are grown onsite.

Simpkins is among a breed of cannabis farmers who shun synthetic nutrients in favor of organic nutrients and enriched soils. For nutrients, they rely on diverse mediums, including fish and worm excrement, lobster and crab shells, kelp and alfalfa, plant ferments and compost teas. They swear that using natural instead of synthetic nutrients results in better cannabis.

“You get a much cleaner product,” Simpkins said.

“A plant that is more vigorous is going to produce a better fruit at the end,” Grillo said. “I get better yield, better resin, better terpene quality. Happy roots, happy fruits.”

Erica Haywood, a licensed hemp farmer and president of LoveGrown Agricultural Research in Farmington, Maine, has gotten a good overview of the many organic nutrient options through hemp growing research projects she works on with two professors from the University of Maine at Farmington.

Among other things, the projects explore best agricultural practices in hemp farming, economic feasibility, plant health, yields and how all of these relate to soil quality. So it’s her job to try different organic soils, fertilizers and nutrients.

“Growing organic cannabis produces a more potent and flavorful product,” said Haywood, who is also a licensed medical marijuana caregiver in Maine and worked as a high school biology and chemistry teacher before going into legal MMJ.

While Haywood believes in a variety of organic soil and nutrient products, she advocates the use of “super soils” – soils augmented with nutrients, microbes and other materials that are beneficial to both marijuana and hemp plants. She said super soil is better for plants than adding nutrients directly to them.

“It’s creating a superlative microbiome at the root level versus ‘force-feeding’ nutrients to a plant,” Haywood said.

That method also is superior to “bottle-feeding” synthetic nutrients to plants, Haywood said, because the plant and the bacterial and fungal environment around the root of the plant dictates what the plant takes up and uses for its growth and flowering phases.

“There’s no kind of bacteria or fungus making those (synthetic) nutrients available. You’re force-feeding the plant a salt solution instead,” said Haywood, who makes her own soils and organic additives.

While yields are sometimes increased by force-feeding plants with the salty liquid synthetic nutrients, Haywood said, the flavor, taste and potency per unit weight is increased “when you allow the plants to make the decisions using organic soil at the root level.”

Grillo agreed that bacteria are critical to healthy plant growth and uses a product called Fish Sh!t from Fish Head Farms in Massachusetts. The aptly named product is created by feeding tilapia a proprietary feed that when digested results in a wide variety of microorganisms that help the rhizosphere, the layer of soil where microorganisms are most active.

“The bacteria help break down nutrients like phosphorous and nitrogen so they are more easily picked up by the plants,” said Grillo, who received his license last July and whose 8,000-square-foot grow is on track to produce about 600 pounds per year.

To get the most out of organic soils and nutrients, it’s also important to properly apply them, said Grillo. He grows in coco and perlite and adds about 6 milliliters of Fish Sh!t to a gallon of water before every feeding. He waters his plants five times per day for one minute, using a drip irrigation system with a timer. He mixes the nutrients into the water before every feeding, rather than doing it less frequently.

Some of the most powerful plants used for nutrients include comfrey. It can be cut down, but it grows back quickly and can be used several times in a season.

At Sacred Flower, with its closed-loop philosophy, the vast majority of the nutrients are grown onsite, like comfrey, or they grow wild, like dandelions. Specifically, Simpkins relies heavily on so-called ”dynamic accumulators,” plants that have vigorous root systems that extend deep into soil and draw nutrients into their leaves.

That mix is put through a process of lactobacillus fermentation for about three days. The fermented leaf mix is then run through a cheesecloth or a cider press, resulting in a powerful liquid nutrient mix.

It can be used right away or stored, because the sugar helps preserve the mix and removes the need for refrigeration. That permits the mix to be stored at room temperature.

When the mix is ready to be applied, Simpkins first pours it into a tank with a large aerator. He then allows the mix to aerate for a few hours, until the materials are well combined. Simpkins, who has four 2,500-gallon tanks, said he pours about 3 gallons of mix into about 2,500 gallons of water. The tanks are connected to drip irrigation lines located in the fields and greenhouse.

As for timing, some nutrients, such as nitrogen, are more effective during the vegetative phase of the growth cycle, while others, like phosphorous, are better during the flowering stages.

Haywood likes to use Coast of Maine’s Stonington Blend for the
vegetative phase, while lobster compost is great for top dressing during flowering phase.

“A lot of organic soil formulators are tailoring products to meet the needs of different growth phases of many plants, including cannabis,” she said.

Similarly, the type of ferment mix Simpkins applies will depend on the stage the plant cycle is in.

For example, comfrey, stinging nettle and alfalfa – all grown at Sacred Flower – are particularly high in nitrogen, which is most beneficial during the vegetative state. Calcium is also preferred at the vegetative phase

But plants don’t want nitrogen at the flowering stage, and instead prefer phosphorous. That can be obtained from marigolds and sunflowers, which Sacred Flower grows. Sacred Flower also ferments mango, banana, squash and papaya – among the few inputs they can’t grow but have to buy – which contain potassium and sugars that help the plant thrive during the flowering stage.

The growers also use manure from five alpacas at Sacred Flower as a top-dress soil amendment. Alpaca manure contains 16 trace minerals that are vital to the cannabis plant. It also is high in nitrogen, potassium, calcium, magnesium and iron, Simpkins said.

Cultivators who like to use organic soil and nutrient options acknowledge that they can cost more – or take more time to make in Sacred Flower’s case. But the long-term returns far outweigh the costs, they said.

“You do not need to rely on a bottled nutrient to bring the best product to market and have a profitable, successful garden,” Simpkins said.