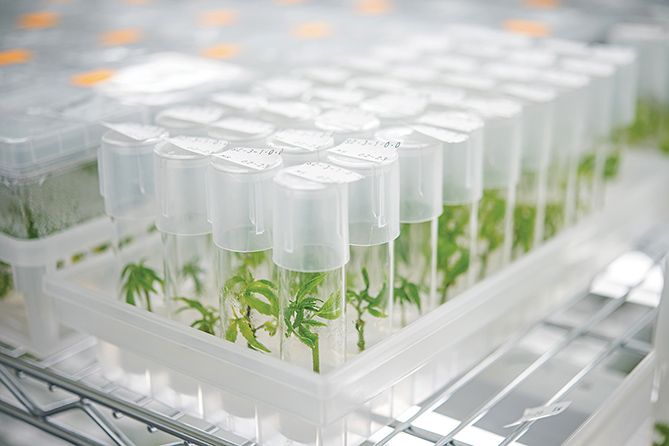 Cannabis cultivators have long relied on cloning as a way to propagate plant inventory and preserve their genetics. But cloning—taking a rooted cutting of a mother plant to grow a genetically identical plant—may slowly be giving way to what many horticultural experts say is a far superior method to propagate and preserve a plant’s genetics: tissue culture.

Tissue culture as a method of micropropagation first came to the fore in the 1950s in the orchid industry. In the decades since, the practice has been adopted by just about every other agricultural crop—from flowers, fruits and vegetables to hops, hay and, now, cannabis.

Plant tissue culture is a collection of techniques harnessed to maintain or grow plant cells, tissues or organs under sterile conditions in culture media, a rich blend of ingredients that promote plant-cell growth. These ingredients can include macronutrients, micronutrients, vitamins, agar and activated charcoal, and they can be blended in-house or found in commercial blends such as Murashige and Skoog. The process is widely used to produce plant clones using a method known as micropropagation. It’s also used to preserve plant genetics.

Tissue culture also lends itself to multiple business models. A small but growing number of large cultivation companies in big marijuana markets, including Canada and California, are adopting tissue culture as a way to pump out hundreds of thousands of plants, while ambitious entrepreneurs have started nurseries to supply cannabis farmers small and large.

But tissue culture isn’t just for scale. It can also be used by small growers to preserve genetics or for proof-of-concept efforts that show how strains can be replicated through tissue culture.

Whatever the size of your business, tissue culture is something to consider. But before jumping into it, conduct a cost-benefit analysis, because setting up a tissue-culture shop requires expertise, time and capital—tens or hundreds of thousands of dollars, depending on the size of your business, your goals and where you get your equipment and labor. If done correctly, an investment in tissue culture can take your grow to a new level.

“Most anyone who has the desire, the willingness and some funds to designate to this can do it. Who should do it?
That depends on what their goals are,” Jones said.

A tissue culture typically takes 10-14 weeks, beginning with clipping very small leaf, stem and root samples to obtain cells and then letting them establish themselves in a nutrient mix, where they eventually multiply. Those cells grow into leaves and stems without roots. About six to eight weeks in, those young plant samples are transferred to another medium where they grow roots, a process that takes three to four weeks. The final steps involve two weeks of acclimation and plant hardening. (See “Tissue Culture Review of Stages,” above.)

Tissue culture has a few critical advantages over cloning.

Tissue culture produces far more starter plants than cloning. Jones noted that 100 clone cuttings per month (a relatively high number) can yield about 5,500 clones per month, or 66,000 clones per year. By contrast, 200 nutrient vessels with five plant clippings each will yield 2.4 million clones per year. (See “Micropropagation Vs. Traditional Cloning,” above.)

“Your genetics are safer and better long term,” Guelich said of using stock created from tissue culture. “You’ll have a larger, well-preserved library.”

Another advantage of a tissue-culture operation is that it requires less space than clones do. Guelich estimated that outfitting a tissue-culture space costs about 75% more than a space needed to produce an equivalent number of clones; the tissue-culture space, however, will be roughly 10% the size of the space needed for clones. For example, if you wanted to make 2 million clones yearly with traditional methods, you would need a 30,000-square-foot space. To make 2 million clones with tissue cultures, you need only 2,000-3,000 square feet, Guelich estimated.

Large Canadian cultivators such as Canopy Growth and AgMedica Bioscience are setting up tissue-culture operations to produce at least some of their plants. They also see it as a way to outproduce the competition in a national marketplace, industry insiders said.

Others have harnessed tissue culture to start nurseries that provide cannabis plants to farmers. Front Range Bio­sciences in Colorado, for example, uses tissue culture to breed high-CBD strains and recreational-market strains, then micropropagates those to produce young plants that are sold to farmers. Front Range CEO Jonathan Vaught said the company has dozens of marijuana customers in California and Colorado, plus dozens of clients in the United States and Canada are buying the company’s plants that were bred and propagated for CBD.

“On the production side, tissue culture is a tool to produce cleaner, healthier, more efficient plants,” Vaught said. Investors believe in the practice, too: The company has raised more than $13 million since last year.

Guelich also wants Orchard Heights to get into the nursery niche and is building tissue-culture facilities at its Washington state cultivation site. The company had its first harvest last November of roughly 4,000 pounds of cannabis and said the opportunity in tissue culture is too good to pass up.

“We want to position ourselves as the leading (seed-to-business) nursery in the state,” Guelich said.

But tissue culture can also be useful to craft growers or others who may not want to scale but would use the procedure to preserve their plant genetics.

“If you’re a breeder and you’ve spent years developing a valuable strain, tissue culture is worth considering because you can use tissue culture as a way to better preserve your genetics,” Jones said.

Finding people who are qualified to run or work in a tissue-culture operation isn’t easy, and it requires an employer willing to pay competitive salaries. Businesses looking to do more modest micropropagation should have two to three employees, while bigger operations will require more labor.

Guelich estimated that entry-level employees or low-level technicians in the Washington state market can expect annual salaries of $40,000 to $60,000. In Arizona, those positions typically pay $17 to $20 per hour, Jones said.

For a lead manager with tissue-culture experience, salaries can range from the high-five digits and easily approach $130,000 or more per year, depending on the size of the operation and the employee’s level of expertise.

“People who are qualified for these positions will often have Ph.D.s and want to get paid accordingly,” Jones said.

While tissue culture is high-tech and can take cannabis production to new levels, it’s still a relatively new tool in marijuana that the industry is learning about.

“We’re still waiting for certain robotics and automation to come in and help get us beyond the bottleneck for really being able to get into production that is in the millions,” Jones said. “That is especially critical for the hemp industry to figure out. We need tech and R&D that accelerates how we operate while increasing our yields.”