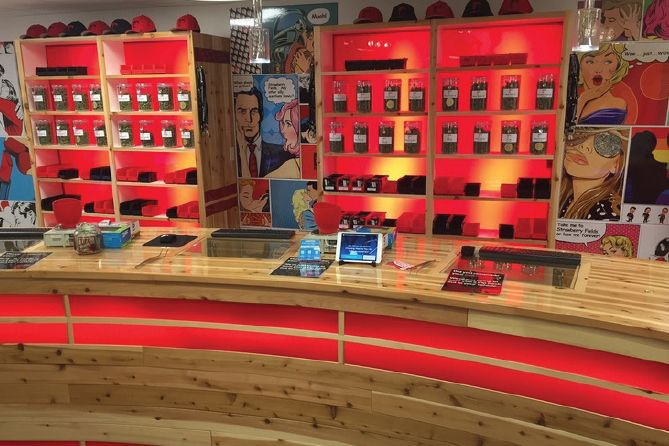 To boost its bottom line, a Colorado MJ company shifts gears to lower its taxes, expand into new lines of business

Strawberry Fields is not your run-of-the-mill marijuana business.

The vertically integrated Colorado company has been opening retail stores across the state over the last few years so it can sell its crop directly to consumers. By doing so, Strawberry Fields protected itself from tumbling wholesale prices. But a change last year in the way Colorado collects excise taxes required Strawberry Fields to pivot abruptly. To cut its tax exposure, the company opted to:

It’s just one way Strawberry Fields, based in Colorado Springs, has bobbed and weaved to boost its bottom line. In addition to growing and retailing cannabis, the company makes various products – including vape pens, edibles and lotions – that it sells in its stores.

The math is simple. Sam Thoman, the company’s head of business development, said customers want cheaper products. By making its own products – versus buying from a supplier – Strawberry Fields can sell its items for 15%-20% cheaper than a competitor’s goods. Besides, consumers aren’t picky about where their cannabis comes from, Thoman said.

“When you look at an edible, if it’s 100 milligrams, consumers look at it as paying for 100 milligrams,” he noted. “They don’t care what the label is.”

Looking ahead, Strawberry Fields plans to distill its own cannabis oil for use in the company’s infused products – rather than buy it from a supplier. The company, in short, wants to be self-sufficient.

Launched in 2010, Strawberry Fields began with a 30,000-square-foot indoor medical marijuana grow, one medical dispensary and a few thousand patients. Three years ago, it built a 2-acre greenhouse to cultivate cannabis for recreational use after Colorado voters approved adult-use marijuana. It also bought a recreational store in Pueblo to sell the cannabis it grows.

Strawberry Fields was able to move only about 5% of its yield through that store, Thoman said.

“At the time, we didn’t have any wholesale customers,” Thoman noted. “We had to figure out how to wholesale the other 95%.”

The temporary fix: Strawberry Fields struck a deal with Colorado-based retailer LivWell Enlightened Health to sell the rest of its product for $950 a pound.

Next up, the company started looking for more retail opportunities. Strawberry Fields built a second store in Pueblo that allowed it to sell 15% of its crop to consumers. After that it added stores in Trinidad and Dumont, allowing Strawberry Fields to sell about half its cannabis. Today it operates six retail outlets.

“We were trying to supply all of our stores and buy as many stores as we could to sell our marijuana,” Thoman said.

But last year’s change in Colorado’s excise tax regulations forced the company to switch gears to protect its bottom line. Strawberry Fields would have been forced to pay higher taxes if it continued to supply its own stores, given the wording of the 15% excise tax on wholesale marijuana sales to retailers.

By selling its marijuana to other dispensaries and supplying its own stores with MJ bought under contract from other growers, Strawberry Fields was able to lower its tax bill by about 35%. It now pays the 15% excise tax on the price it has contracted to sell its crop to retailers – rather than the state-calculated average market rate, which has been higher.

The Colorado Department of Revenue calculates the AMR quarterly based on recent sales transactions. It covers marijuana sold or transferred from a grower to a retailer. The January AMR, for example, was set at $1,265 a pound for bud. By comparison, the prevailing contract price for indoor-grown bud at that time was $800-$1,000 a pound. Greenhouse marijuana was $750-$800 a pound, and outdoor MJ was about $500, Thoman said. In the past four months, Strawberry Fields hasn’t purchased a single indoor pound of flower for more than $1,000, Thoman said.

That means Strawberry Fields would have paid a steeper tax based on the AMR if it supplied its own stores with the marijuana it has been selling to retailers under contract at $750 a pound.

“We’d still be making money, but marijuana is the cheapest it’s ever been,” Thoman said, explaining the gap between the contract price and the AMR. “The market is oversaturated right now.”

Thoman said Strawberry Fields is waiting for the AMR to better align with what is happening in the market before the company starts transferring the marijuana it grows to its own dispensaries.

“If the market gets really bad and our stores need product, we’ll eat that excise tax,” he said.

Hands in More Than One Pot

Despite the setback with the excise tax, Strawberry Fields has vertically integrated other aspects of its business and, as noted, the company is making its own vape pens, edibles and lotions.

Consumers want less expensive products, and by manufacturing its own products Strawberry Fields can keep costs down, Thoman said.

“We slowly kicked a lot of lotion companies off our shelves,” he noted. “We still carry O.Pen, but their shelf space is super limited. If it gets to the point where we can switch everyone to Pentagon (the Strawberry Fields vape pen), then we’ll take them off our shelves.”

Strawberry Fields now has its eyes on distillation. Because it does not yet have the equipment, it contracts with Pueblo-based Purplebee’s Extracts to turn its trim into food-grade cannabis oils. For its live resin, wax and shatter, it contracts with Clutch Extracts in Pueblo.

Strawberry Fields spends about $3 million in processing fees annually, but it’s in the process of acquiring the needed equipment to bring all of that work in-house. The equipment costs about $200,000.

“Our goal is basically to get to where even if we have to pay that excise tax, we’ll cut everyone else out,” Thoman said.