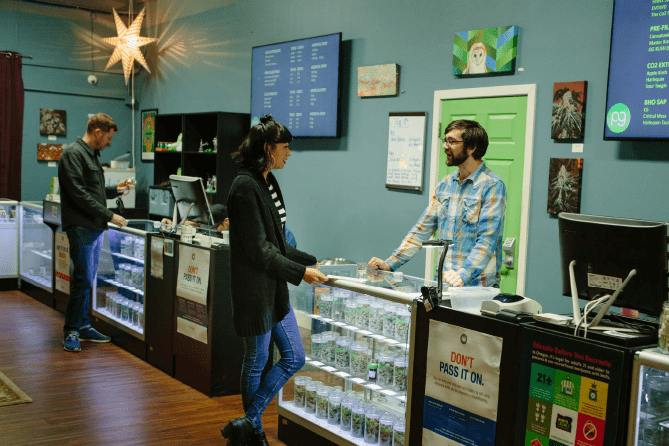 She and her husband Matt had just convened a meeting with employees at their Portland, Oregon, retail marijuana shop, Pure Green. As CEO, she was about to deliver grim news. It was February. Sales had taken a seasonal dip over the winter, and Walstatter had to make up the lost revenue.

The 2-1/2-year-old store, which sells medical and recreational cannabis, would have to cut costs.

Walstatter broke the news: Wages for more than a dozen workers would be cut by $1 per hour. Some employees would see their work hours reduced as well.

“We knew we had to stand up there and say we’re going to do this. We believed in ourselves and we believed in them,” Walstatter said.

It turned out to be the right move, thanks to steps Walstatter and her husband took that helped ensure employees would make the sacrifice but benefit as the company recovered. Sales eventually rebounded, and wages began to rise.

As marijuana markets become increasingly saturated and competition drives down profit margins, cannabis retailers will need to pay closer attention to controlling costs. Payroll is often a large expense for retailers, so seeking savings there is a reasonable step.

But there are plenty of pitfalls, and morale can suffer greatly.

The lesson from how Pure Green did it: Don’t just cut and walk away. Do your part to increase sales so that the wage cut can be reinstated. Crunch the financial numbers. And bring employees into the loop by sharing data.

“Keeping your company afloat is all about keeping your payroll costs in check and incentivizing your employees to increase sales and give them the info to increase those sales,” Walstatter said.

Here’s some additional insight into how Pure Green successfully brought its payroll costs under control as Portland’s market has become increasingly saturated with competition.

Reduce the Pain of Cuts

For starters, you have to be up front with employees about how the business is doing. If sales have decreased, tell employees.

“It’s important to be clear to employees about the forecast and health of your company. They see cash going into the registers, but they don’t know about payroll costs, 280E and other costs. It helps people understand,” Walstatter said.

It also helped that Walstatter told employees she and her husband Matt had a plan, and that the wage cut would be temporary.

The faster sales picked up, the faster the $1 hourly reduction would be returned, she said.

Furthermore, Walstatter was heavy into analytics. She would share reports with staffers so they’d be equipped with key data – what hours are the busiest and slowest, what strains are the most and least popular, and what budtenders are most popular with customers – needed to help them increase those sales, and thus help themselves.

“We told them our responsibility was getting more people in the door,” Walstatter said.

Based on the data, Pure Green offered specials on select strains on certain days and started brainstorming ideas like seasonal specials – think “these strains are great for hikes.”

The team also rolled out other promotions, like “staff picks,” which helped acquaint customers with budtenders. That generated loyalty and increased customer traffic.

The strategy paid off. Sales bounced back, as they usually do in the spring. After cutting wages in March, Pure Green increased wages by 50 cents per hour at the end of April.

Walstatter said she expects to lift wages by another 50 cents over the summer, now that Oregon recreational stores are allowed to sell non-flower products like extracts. If that happens, employees will be back at where they started – just a few months after the cuts.

The Value of Data Crunching

While trimming wages and reducing hours aren’t easy steps, Walstatter doesn’t implement them without data to get the most from the cuts, and also to reduce the pain to staff.

Using the store’s tracking software, she constantly follows daily sales averages and foot traffic to know how many people she’ll need on staff on any given day or month.

“I’m constantly looking at what the traffic in and out of the store is and what our daily sales are. I know how much our staff can handle,” Walstatter said. “How many times do I walk out on the retail floor and see the staff standing around? I have to ask myself, how many people am I paying to stand around right now?”

It’s a good question, because hard-earned revenue often gets sucked away by expenses beyond one’s control. So cannabis retailers should look to cut costs they can control.

“My company is going to spend over $18,000 in licensing fees this year alone. I can cut costs all I want and tell people to turn off the lights, but at the end of the day … these are just little scratches on the surface of what my overall budget looks like,” she said.

Looking ahead, Walstatter is already pondering next winter, when sales are likely to slacken. She said she won’t hesitate to cut wages and hours again, if necessary.

“If we have to, we will go back to that,” she said. “I just don’t need to have as many people in January or February as I do in August and September.”