San Diego: First of many crackdowns?

San Diego has teamed with a coalition of licensed medical cannabis businesses to crack down on illegal MMJ storefronts and, perhaps more important, to educate consumers about which shops are legal.

“The average consumer, it’s not on their radar. But if you put it on their radar, I know I would certainly choose to go to a shop that’s permitted and regulated,” said Simms. “That’s going to be a much better way to reroute the traffic.”

Why? More confrontations will erupt with illegal cannabis operations over the next year or more while California implements the Medical Cannabis Regulation and Safety Act (MCRSA).

Adult-use legalization aside, the implementation of the MCRSA will bring to a head the status of longstanding cannabis businesses that have operated for years in the black or gray markets.

Simms thinks the best way to force those businesses to comply with regulations is to target their customer base.

“All these other cities, where (dispensaries are) shut one down one at a time, it doesn’t work,” Simms said. “It’s not a deterrent at all.”

Oversight and organics in WA

Washington State’s Department of Agriculture (WSDA) wants to streamline the state’s marijuana regulation. And, in the process, it’s hoping to develop a stamp of approval for organically grown cannabis.

The WSDA is proposing to hire a “cannabis coordinator” to oversee the department’s regulation of the state’s marijuana industry. The job could include administering a program to certify organically grown marijuana.

Hector Castro, the WSDA’s communications director, said the department currently has a variety of cannabis programs and divisions without any central coordination. That includes pesticide testing and the inspection of edibles labeling, a job the department currently performs under contract with the state’s top marijuana regulator, the Liquor and Cannabis Board.

“For years we have done the food and safety inspections, the sanitation inspections for our food processors. So there was already expertise in this agency to do this kind of work,” Castro said of the testing and inspections.

After the department performs its tasks, it gives the Liquor and Cannabis Board the data. The board uses the information to determine whether a marijuana processor should get a license.

Under the WSDA’s proposal, the department would formally handle testing, inspecting and licensing.

To cover the costs, license applicants would pay the department a fee.

The WSDA plans to send a two-year budget proposal for its regulatory scheme to Gov. Jay Inslee, who then will issue his own budget. That’s when ag department officials will learn if their proposal will go forward. The legislature would then have to include the department’s plan in its budget.

“This is really early in the game,” Castro said.

“There would have to be some discussion over terminology because organic certification is a federal program,” Castro said.

Historically, Washington’s organic growers have come together to develop the criteria they followed. Castro anticipates applying much the same principle to marijuana.

The decision by the United Kingdom’s chief medical regulatory body to label CBD a form of medicine could be a preview of what’s to come in the United States. Ditto for a pharmaceutical company that’s testing CBD products.

Here’s attorney Robert Hoban’s take on the U.K. government’s thinking: “Instead of natural-products producers producing hemp oils that contain cannabinoids, including CBD, we’re going to give this to the pharmaceutical companies. Namely the big elephant in the room – GW Pharma.”

Hoban, who works with U.S. hemp and CBD producers, doesn’t like that approach.

“That prevents all people selling a natural product as a dietary supplement or a food supplement from selling an oil that’s rich in CBD,” Hoban said. “I don’t think that’s what nature intended.”

In the U.S., GW Pharmaceuticals has an application pending with the U.S. Food and Drug Administration for Epidiolex, a CBD-based drug for seizure disorders.

“If it’s approved, the Food and Drug Administration is going to make the same announcement: a formal and final announcement that says you can no longer sell CBD oils as a dietary supplement or as a food product because the drug status trumps the natural supplement status,” Hoban said.

But that’s not a done deal. The companies that produce natural-product CBD supplements are going to have an opportunity to contest the edict in both court or administrative proceedings.

“I do believe we’re going to end up in a place where you see naturally occurring CBD oils sold as a nutraceutical,” Hoban said, “and pharmaceutical, cannabis-based medicine that’s produced by pharmaceutical companies regulated at the federal level.”

Chart: What’s in a cannabis company name? Not as much slang 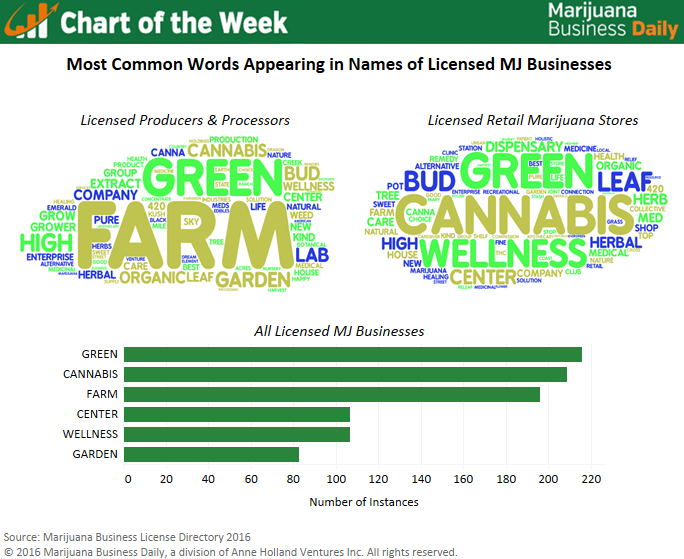