Michigan and Montana (finally) make it into the headlines on the medical marijuana front, Colorado’s cannabis industry undergoes a big shift and California lawmakers consider the potential for statewide MMJ regulations in 2015.

When was the last time your heard anything about the medical marijuana industry in Michigan and Montana?

These two states barely register on the national MMJ map, even though they are both home to dispensaries and cultivation operations. News about these markets has slowed to a trickle, and businesses operate in the shadows because of the tenuous legal situation in each state.

This week, however, both emerged in the headlines.

Senate Majority Leader Randy Richardville said he has experienced delays in moving two important industry bills forward because of concerns from law enforcement. But he said the proposals are very much still in play, adding that the Senate could take them up later this month.

One proposal would set up statewide regulations on dispensaries – and therefore give them legal cover to operate – while the other would allow the sale of infused products, which could expand the market significantly. The House approved the bills by wide margins last December, but they have languished in the Senate since then. 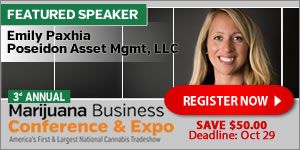 Updates on their status have been few and far between, so Richardville’s comments this week are encouraging.

Over in Montana, a local newspaper report this week focused on how medical marijuana businesses are thriving in the city of Butte. The report said fourteen dispensaries are currently operating, making it the hub of Montana’s MMJ industry.

Many cannabis professionals are unaware that dispensaries even exist in Montana, and in fact Butte is one of the only cities where that’s the case – thanks to lenient law enforcement officials and responsible business owners.

The fate of the state’s MMJ industry still hangs in the balance as a key lawsuit works its way through the courts. But for now, the fact that Montana has an industry to speak of is a great success.

Colorado’s recreational marijuana industry is about to get a lot more competitive.

On Wednesday, the state officially lifted its moratorium on newbies – meaning anyone who meets the standard requirements for a cannabis business license can open retail stores, cultivation sites and other companies that handle marijuana. Previously, only those with existing MMJ licenses could open these types of businesses.

The state Marijuana Enforcement Division issued 46 new business licenses to entrepreneurs who want to start their own rec shops, along with 37 permits for new cultivation businesses and 13 licenses for marijuana-infused products companies.

Although local jurisdictions must still sign off on these licenses, new entrants will add a hefty dose of competition to existing recreational businesses, which include 242 retail stores and 316 grow operations.

Another big change, which we touched on earlier this week in a Q&A, is that recreational shops will no longer be required to grow 70% of what they sell. That could help create a robust wholesale market for cultivators and lower startup costs for new retail stores that don’t want to grow their own cannabis.

Combined, these moves could push down prices of cannabis and edibles, lower profit margins and force MMJ businesses to innovate and lobby more aggressively for customers.

We’ll keep an eye on how the changes alter the dynamics of the industry in Colorado.

Carrying the Torch in California

California is often held up as an example of how not to do things when it comes to medical marijuana. This year, it reinforced that perception once again when the Legislature tried and failed to pass a bill setting up rules for the industry.

But as we reported earlier this week, the clock is ticking for California to set up some kind of infrastructure now that a formal push to legalize recreational marijuana in 2016 is under way.

The big question: Who is going to lead that charge?

Although one key legislator behind the latest failed draft of MMJ regulations firmly believes there will be another attempt next year to put rules in place for medical cannabis companies, no single lawmaker has yet emerged as an obvious choice to carry the torch.

The prime sponsors of recent marijuana legislation – Sen. Lou Correa and Assemblyman Tom Ammiano – won’t be around the Capitol in 2015 because of term limits.  A lot will ride on who replaces them, and how friendly they are to the marijuana cause.

Several lawmakers told Marijuana Business Daily that they are “strongly considering” spearheading an MMJ regulatory bill next year, but nobody has officially agreed to step up to the plate.

Some potential sponsors, according to the grapevine, include State Sen. Mark Leno and Assembly Members Rob Bonta, Reggie Jones-Sawyer and Bill Quirk.

A spokeman for Assembly Member Bill Quirk said the lawmaker is “committed to further this policy effort” but added that several factors will ultimately come into play.

“The makeup of the legislature, leadership on key committees, and the position of the governor will all impact the decision,” the spokesman said.

Additionally, Quirk could decide to focus his efforts on supporting the proposed 2016 ballot initiative to legalize recreational marijuana.

“Unfortunately, it is simply too early to know the right path yet or what a possible bill will look like,” Quirk said. “Our office will continue to reach out to stakeholders and other lawmakers on this issue over the next several months and expect to make a decision prior to the bill introduction deadline in February.”