Medical cannabis is often portrayed as one of the fastest-growing businesses in the United States, an industry experiencing exponential growth as it churns out overnight millionaires at a rapid clip.

This romanticized view of the industry isn’t exactly accurate – at least over the past two years – but the future does indeed look bright.

Last week, MMJ Business Daily released market estimates for medical cannabis sales via dispensaries. According to these estimates – compiled by examining the marijuana industry on a state-by-state level – MMJ sales actually declined by $200 million to $300 million last year, coming in at $1.2 billion-$1.3 billion (you can access the full report here).

Not exactly the Green Rush you hear about so much in the media. But here’s the good news: MMJ Business Daily estimates that the industry should recover this year – climbing to $1.5 billion – based on an improving climate for medical marijuana in many states, continued growth in some areas and the emergence of several new markets.

And the general cannabis industry could really hit its stride in 2014, fueled by the opening of retail marijuana stores in Colorado and Washington and dispensary openings in Massachusetts, Connecticut and other states. MMJ Business Daily predicts the industry will grow by 10-15% annually from 2015-2017 and then balloon to as much as $6 billion in 2018 with more states legalizing medical and recreational marijuana in that period.

These figures could of course change drastically one way or the other depending on multiple factors, as this is one of the most unpredictable, volatile industries out there. But the overall growth trend should hold up, which is great news for anyone operating a cannabis-related business or hoping to in the near future.

Also last week, we broke the news that Washington State has selected a Massachusetts company called Botec Analysis Corp. as the finalist for its cannabis consulting contract.

The choice puzzled a lot of industry professionals, primarily because Botec is a think tank specializing in crime and drug policy rather than the business end of MMJ. Botec, however, assembled a team that includes subcontractors with expertise in a variety areas, including cannabis testing, quality standards and rulemaking. You can see more details of the individuals and companies involved here.

Washington officials initially stressed that a big part of the consulting gig would involve coming up with estimates on the potential size of the recreational cannabis industry in the state. So on that end, the choice makes sense.

Brian Smith, communications director for the Washington State Liquor Control Board, told MMJ Business Daily that Botec was the “clear winner” in each of the main categories (product and industry knowledge; product quality standards and testing; product usage and consumption validation; and product regulation).

“Between the industry knowledge Botec brings together with the research we’ve done, and the public outreach since November with Washington’s marijuana industry members, we’ll have what we need to craft Washington’s system of legal marijuana,” Smith said.

But it’s interesting that some of the biggest names and most knowledgeable players in the business side of the cannabis industry (including consultants) aren’t involved, at least at this point. Judging from the selection of Botec, Washington’s recreational cannabis model might not be as business-friendly as some had hoped and could lean toward very heavy regulation.

Exclusive: US Medical Marijuana Sales to Hit $1.5B in 2013, Cannabis Revenues Could Quadruple by 2018 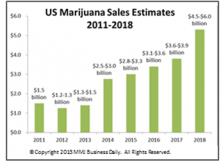