The debate over cannabis tourism is heating up in Colorado and Washington State as officials develop regulations on retail marijuana sales.

Last week, a task force in Colorado set up to propose regulations on the recreational cannabis industry agreed that visitors should be able to buy marijuana from retail stores, with some limitations. The group will add this recommendation to its final list of suggestions. State officials will then take these recommendations into consideration as they craft rules covering the recreational cannabis industry.

Washington is weighing the same issue, and several businesses hoping to capitalize on cannabis tourism have already popped up.

Whether either state will give the green light to marijuana tourism is one of the most pressing questions for entrepreneurs in the wake of cannabis legalization.

The business benefits are tantalizing: A much bigger customer base, billions of dollars in additional revenues, more sales tax, thousands of additional job openings and limitless possibilities for entrepreneurs.

But allowing visitors to buy cannabis also carries a significant risk: The increased possibility that the federal government will step in.

The Obama administration had already been cracking down on the medical marijuana industry before Colorado and Washington legalized cannabis for adult use. Creating a marijuana market for tourists – let alone residents – is a much more serious issue, and it’s doubtful that the government will simply turn its head and look the other way. Whether that means the feds would try to stamp out cannabis tourism completely or would look to influence the regulatory structure governing such sales remains to be seen.

Of course, supporters of the idea could argue that paving the way for cannabis tourism would prevent the creation of a huge black market for recreational marijuana, which is essentially what the task force in Colorado determined.

Regardless, allowing cannabis tourism would most certainly invite added scrutiny from the Obama administration and increase the chances of federal interference.

Also last week, we wrote about the challenges of getting medical marijuana legislation passed in the South, highlighted by recent developments tied to a bill in North Carolina. Lawmakers in that state said they squashed a medical cannabis bill because MMJ supporters were “harassing” them with letters and phone calls.

This is lawmaking at its worst. Officials are supposed to represent the people, and part of that means listening to – not dismissing – their opinions on issues of the day. The flood of phone calls and emails indicates that there is  support for medical cannabis, and it should have encouraged debate, not ended it.

Unfortunately, this incident epitomizes the resistance to MMJ in that area of the country, helping to explain why not one Southern state has legalized medical cannabis to this day. With more than a third of the states in this nation having some sort of medical marijuana law on the books, the South seems woefully out of touch on this issue (to put it nicely).

Proposal Would Pave Way for Dispensaries in Michigan

1st DC dispensary Hopes to Open in April, Others to Follow 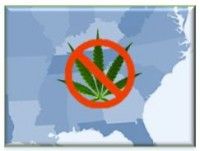