If you want to start a dispensary, you’re likely wondering how much money you can expect to bring in each year. And if you already own a medical marijuana center, you probably want to know how you stack up against the competition from a financial perspective.

Surprisingly, this type of information is hard to come by given the dearth of data on dispensaries and medical marijuana businesses in general.

Last week, we shed some light on these areas, revealing one of the top results from a survey of professionals MMJ Business Daily conducted earlier this year. We found that annual dispensary revenues run the gamut, from less than $100,000 on the small end of the spectrum all the way up to millions of dollars for the larger players (and even tens of millions for the biggest fish in the pond).

We also discovered that revenue potential depends on a a number of factors, such as local/state regulations covering permits, plant counts and qualifying medical conditions; overall barriers to entry; location; and of course the size and scope of the competition. Additionally, we found that some owners purposely limit the size of their dispensary so they don’t attract unwanted attention.

A more thorough analysis of dispensary financials – as well as hundreds of additional data points and comprehensive industry information – can be found in our newly released Marijuana Business Factbook. You can get more information on the Factbook here.

Also last week, we wrote about how interest in starting a Massachusetts medical marijuana dispensary remains high despite indications that the state will implement strict rules and sizable financial requirements.

To be clear, dozens – if not hundreds – of wanna-be dispensary owners dropped out of the race after the state health department released draft rules that, among other things, would require applicants to put $500,000 into an escrow account.  And more will certainly throw in the towel going forward as the reality sets in, as it could cost more than $1 million to actually open a dispensary in Massachusetts when it’s all said and done. Aside from lofty financial requirements, local entrepreneurs will likely also have to face competition from out-of-state players who already run dispensaries or have helped open such operations elsewhere.

But hundreds more are still interested to some degree, as evidenced by attendance at recent informational events in the region and anecdotes from MMJ consultants. The opportunity is attractive enough that many entrepreneurs will end up throwing their hats into the ring for a chance at getting involved in a brand new industry.

Senator: NY on its Way to Becoming Next MMJ State 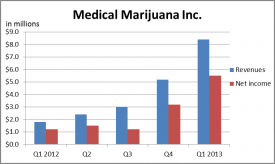 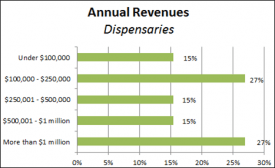