Amid the hustle and bustle of the 2015 Marijuana Business Conference and Expo in Las Vegas last week, cannabis professionals gained valuable insight into everything from competing in a mature market to battling pests in a commercial grow.

Below, Marijuana Business Daily highlights 10 takeaways from the conference, which drew more than 5,000 participants and featured over 70 speakers.

During his keynote address to the conference, former presidential candidate Ralph Nader told cannabis executives that “proper regulation is the best aspirin you could ever have, other than marijuana.”

The longtime consumer advocate said solid governmental oversight has proven good not just for customer protections, but also for businesses. It helps stave off corruption, which in turn helps businesses thrive ethically in the long term.

For example, he pointed to the recent Volkswagen emissions scandal, saying it provides a perfect example of the need for completely independent laboratory testing in the cannabis space. Otherwise, it’s simply too tempting for corporations to cut corners.

“Watch out for control of these labs by your industry. That’s when the problems are going to start,” Nader warned.

During the very first session of the conference, a panel of business and political leaders provided a look at what California’s MMJ industry will look like in a regulated environment.

Three key points from the session:

Put those three factors together, and it could mean that California will once again become the marijuana frontier for the industry in the very near future.

At least 11 states stand a decent chance of legalizing either medical or recreational marijuana next year, according to several well-plugged-in panelists at a session focused on what’s to come in 2016.

On the rec side, Arizona, California, Maine, Massachusetts, Michigan and Nevada are expected to vote on the question at the polls, while Rhode Island and Vermont are considered strong contenders to legalize via their legislatures.

On the medical side, Florida, Kentucky and Nebraska may all legalize, with the first likely to do so at the ballot and the others via their legislatures. The latter two came as something of a surprise when Marijuana Policy Project Executive Director Rob Kampia made that prediction, but he stood behind his analysis.

Kampia also predicted that after the dismal failure of a legalization initiative in Ohio this year that prohibition there won’t be repealed until 2020, due to various political factors.

Native American groups could “potentially” be a silver bullet for the marijuana industry’s banking woes, one panelist said Friday.

“We have been working to solve that issue recently… There is opportunity to solve this banking issue for everyone in the cannabis industry through tribal opportunities on tribal land,” Jeff Doctor, a spokesman with the National Indian Cannabis Coalition, said during a panel on tribal marijuana efforts.

While Doctor did not go into details, he hinted that more about the situation may emerge by January.

“We will hopefully have an answer for that by the end of the year… We are very close,” he said.

During a panel that laid out the challenges faced by commercial growers who have been trying to figure out an effective but non-toxic way to effectively fight off pests, Oaksterdam University’s Joey Ereneta offered a relatively simple solution: just ask for advice.

There are already plenty of effective and natural pesticides that are certified by the Organic Materials Review Institute (OMRI), which is considered the gold standard for organic growing.

And, Ereneta pointed out, cultivators are probably going to need some type of OMRI-supported pesticide in the near future, as states such as Colorado and California crack down on pesticide use. Oaksterdam has compiled a list of such pesticides, Ereneta said, and is willing to share it.

While the marijuana industry is poised for double-digit growth, several entrepreneurs at the conference told their peers that it will only be like this for perhaps a few years before the industry stabilizes and becomes more “normal.”

So it behooves cannabis business owners to spend cautiously and make decisions with an eye on the future, as the industry will become much more competitive.

“The dust hasn’t settled, but it will happen, and we should plan for it,” Patricia Rosi, CEO of Wellness Connection of Maine, said during a session on how to survive in a mature market.

That means dispensary owners and other business owners need to be careful not to grow too fast, and they should always be assessing what products they are selling as well as what costs can be reduced or eliminated.

As both the medical and recreational marijuana industries mature, there will be a greater variety of clients that dispensaries will have to be ready to serve.

For business owners, that means having knowledgeable and personable budtenders who can speak with medical patients and “cannasseurs” who know their cannabis products intimately and have specific needs and wants, several speakers said during a session on what patients and consumers want.

For example, products that are an even mix of THC and CBD don’t sell as well as products that lean more towards one or the other when it comes to chemical makeup.

A Big Deal for Funding

A major change to the JOBS Act last month that went unnoticed by many companies now allows businesses – including those in the cannabis space – to raise investment capital from non-accredited investors, whether via crowdfunding or another avenue. That’s a huge deal, a three-member panel focused on investing noted.

“The change to the JOBS Act will actually open up the universe…if you’re seeking more capital,” said Al Foreman, a partner at New York-based Tuatara Capital. “It will greatly make your process work a lot more seamlessly.”

Members of the same investing panel also said they fully expect marijuana to be legalized at the federal level at some point in the future. But that won’t necessarily be next year – or anytime soon – and companies need to understand that, and take it into account when planning business moves for the near future.

“Let’s not kid ourselves: it will become legal, but we’re not invisible,” said attorney Robert Carp, alluding to the fact that battles with federal agencies, including the Internal Revenue Service and others, probably won’t subside anytime soon. Carp and others suggested that discretion – and compliance – is often the better part of valor when it comes to the cannabis trade.

During a panel that focused on food safety in the cannabis edibles sector, panelists were quick to encourage infused product manufacturers to do everything in their power to ensure that their products are as pure and as safe as possible, for the good of the entire industry.

“Even if we are associated with a food-borne illness, it could take years for our industry to recover,” said Maureen McNamara of Cannabis Trainers.

Nader Offers Words of Encouragement and Warning to Conference-Goers 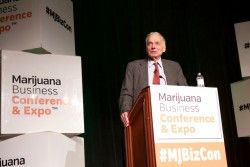 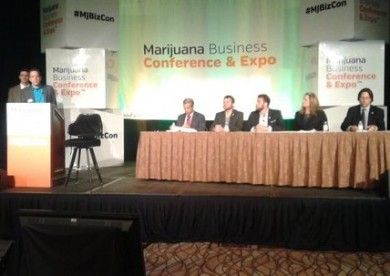