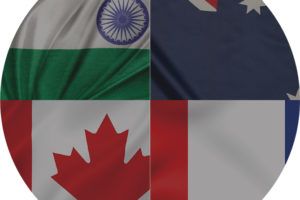 The United States may be driving innovation in international marijuana markets, but when it comes to hemp, U.S. producers are scrambling to catch up with established trade opportunities for a crop that has long been legal in other countries.

Hemp is taking root in the United States, thanks to the 2014 Farm Bill, which allowed limited production. But booming U.S. demand for hemp products is still largely filled by overseas producers. According to the U.S. Congressional Research Service, hemp imports surged an astounding 1,200% between 2005 and 2015 – from $5.6 million to about $78.2 million.

Most of that growth was in hemp seeds, both viable for planting and sterilized and hulled for eating. The United States imported a negligible amount of hemp seeds in 2000, but that sum climbed to $54.1 million in 2015, according to CRS.

That doesn’t mean that U.S. hemp producers and processors don’t have ample opportunity to expand in global markets. The world’s dominant hemp producers – China, Canada and the European Union – historically have focused on fiber, the bulkiest and least profitable part of the plant. When it comes to seeds and CBD, which can be extracted from flower and condensed into easy-to-ship oils and isolate, the United States isn’t nearly as far behind other countries.

Legal obstacles to global trade also aren’t nearly as formidable for hemp as they are for marijuana. U.S. Customs officials sporadically detain hemp products (especially CBD goods), but producers are reporting some success exporting hemp, and they’re hoping that any future Farm Bill legislation will clear up confusion and open additional markets for sale.

“We see greater opportunity for moving across borders when it comes to hemp,” said Patrick Goggin, an attorney with Denver-based Hoban Law Group, which is in the process of opening offices in five countries in Europe and Latin America.

Marijuana Business Magazine talked to hemp producers and activists about the best international opportunities for exporting hemp and hemp-derived products. Here’s where they said they expect to see the most business opportunities in coming years.

The EU’s largest hemp producer is also fertile ground for hemp expansion. According to the European Industrial Hemp Association, France grew nearly half of the 2016 hemp crop for all EU member nations, which collectively reported nearly 250 million pounds of hemp from more than 70,000 acres that year. France’s hemp cultivars are geared toward fiber production, even as smokable CBD varieties are selling in tobacco shops and cafes. There’s no market data for smokable hemp in France or neighboring Switzerland, where hemp smoking is also growing in popularity, but the trend presents an opportunity for producers with high-quality flower varieties.

Australia legalized the sale of food-grade hemp seed and oil last November, and Australian growers are unlikely to be able to fulfill 2018 demand for trendy hemp ingredients. That means foreign seed producers have an opening to supply food-grade hemp products for the nation of 24 million people.

Canada grew about 10 times more hemp than the United States in 2016, so it might seem chilly ground for exporters. But Canada limited hemp cultivation to fiber and oilseed varieties until this year, meaning Canada is behind its southern neighbors when it comes to valuable CBD products. Already, one Canadian hemp company has contracted with Colorado hemp producers for advice on developing CBD products for the Canadian market.

India has banned all cannabis cultivation for more than 50 years, but the country is starting to explore a hemp revival. India’s Ministry of Textiles began investigating hemp last year, and the country’s Council of Scientific and Industrial Research also announced plans to start researching 20 strains of medical cannabis, including low-THC varieties. The world’s second-most-populous nation is home to 1.3 billion potential consumers and is worth watching for hemp producers with global ambitions.