One executive even snapped a photo of a large billboard that promotes the snacks – Totino’s Pizza Rolls – by referencing the 4/20 cannabis holiday.

“I caught one on Colfax Avenue, so I took a picture of it and said, ‘It looks like we’ve really gone mainstream with this Totino’s Pizza Roll billboard,'” Joe Hodas, the chief marketing officer at infused products maker Dixie Brands, told Marijuana Business Daily.

The bold advertising move, which includes billboards and ads on buses that include slogans such as “Stock Up B4/20,” is both promising and frustrating for those in the marijuana industry.

On one hand, it shows how large mainstream companies are starting to take the cannabis market seriously.

On the other hand, the fact that General Mills can target marijuana consumers via multiple billboards and city buses around Denver while cannabis companies in most states are largely barred from doing so highlights the uneven playing field for MJ businesses.

The Totino’s ads even spurred a discussion among Dixie’s marketing staff over just this issue.

“We were talking about it all weekend,” Hodas said. “In a bad way, (it’s) ironic for all of us now because you have a mainstream brand that can advertise on the backs of legalization. But we companies, as pioneers having paved the way for this, none of us can advertise our products on a billboard.”

This isn’t the first time Totino’s, which is owned by global food giant General Mills, has tried to appeal to marijuana consumers.

On April 20 a year ago, the official Totino’s Twitter account posted multiple jokes and cannabis-themed ads online, including references to such marijuana sayings as “wake and bake,” “hot box,” and “roll your own.”

Other mainstream companies have tried to make inroads with cannabis consumers by utilizing cultural jokes and phrases.

But while Totino’s may not be the first mainstream company to dip its toes into cannabis-related advertising, the number of billboards and other ads that it paid for in the Denver metro area may very well be a milestone.

“I seem to recall one other time that I saw (something similar), but not en masse,” said Ean Seeb, co-founder of the cannabis retailer Denver Relief, who also drove by one of the Totino’s billboards on Tuesday and has seen them on the sides of city buses.

Seeb added that the Regional Transportation District, which operates bus services in the Denver metro area, must have had to approve the ads knowing that they reference marijuana.

General Mills did not respond to multiple requests for comment from Marijuana Business Daily, so it’s unclear just how many ads the company paid for around Denver, how much it invested in the ad campaign, or if it’s posting similar ads in states other than Colorado. 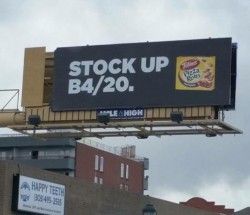 But Seeb, like Hodas, said the incident highlights the limitations of marijuana-related companies to advertise their own products and services.

“I wish the same opportunities were afforded to those of us who are actually in the industry,” Seeb said.

Policy analyst Andrew Livingston, who works for the Denver cannabis law firm Vicente Sederberg, said advertising and marketing restrictions vary greatly across the state depending on local ordinances, but the umbrella state law is quite restrictive by itself.

“The only big public billboard or sign that you can have under state law is the one on your zoned lot,” Livingston said.

For plant-touching companies such as retailers or edibles makers that want to advertise in print or online, he said, the bar is that the company must be ready to present “reliable evidence” that no more than 30% of that outlet’s audience is under 21 years old.

That’s not an easy threshold to meet, and the consequence is there’s a real dearth of actual marijuana-related ads in the public domain.

One of the ways cannabis companies try to work around such limitations in Colorado, Livingston said, is by sponsoring things such as highway cleanups. Doing so gets their names on small signs on the side of the highway.

“It’s a frustrating issue, (but) I applaud a company like General Mills that isn’t banned from advertising” trying to target the cannabis crowd, Seeb said, adding that he’s certain the Totino’s marketing ploy won’t be the last such gimmick to appear in states with legal cannabis.