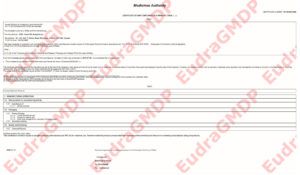 The company earned a certificate of EU-Good Manufacturing Practice (GMP) compliance on Jan. 15 for its facility on Talbot Street, which is located on its Aphria One campus in Leamington, Ontario.

“This certificate is limited in scope to bulk cannabis inflorescence as an API for medicinal use” and “to cannabis API processed exclusively inside the area designated as GMP Annex,” according to the document.

Aphria acquired Ara Avanti Rx Analytics through its purchase of Nuuvera in 2018.

The Brampton company is intended to be used as the Canadian staging site for internationally bound, GMP-certified medical marijuana products, Aphria said in a regulatory filing.

When Aphria announced its intention to buy Densborn, Germany-based CC Pharma in late 2018, the company had said it was aiming to obtain an EU-GMP certification before the deal closed in early 2019.

Aphria is also seeking EU-GMP status for its subsidiary in Malta, ASG Pharma, which is expected in the second half of fiscal 2020.

“ASG will provide the company with the ability to bring production of cannabis product from outside of Europe into an EU-GMP-certified facility for further processing and packaging for distribution throughout Europe,” Aphria noted in a January filing.

“Through the subsidiary QSG Health, the company will pursue the health and wellness market with CBD-based products. These products will not have the THC component found in cannabis and will focus on diversifying the company’s product offerings throughout Europe.”

In an October regulatory filing, Aphria said delays in the construction of its facility in Lesotho, in southern Africa, as well as the commencement of operations resulted in a delay in the facility securing EU GMP certification.

Obtaining EU-GMP is a lengthy, costly process. Only a small number of Canadian medical cannabis companies have earned the certification.

Rewards have been few

So far, however, the payoff for companies has not borne fruit.

Vancouver, British Columbia-based Zenabis Global, meanwhile, was handed a statement of noncompliance with GMP on Nov. 27, 2019, after inspectors concluded the company did not comply with the GMP requirements referred to in Malta’s Directive 2003/94/EC.

Zenabis was found to have one critical deficiency for not correctly implementing Pharmaceutical Quality System incorporating Good Manufacturing Practice and Quality Risk Management. There were also nine major and 20 other findings.

“The company failed to follow up on this plan and to meet the commitments made,” according to the statement of noncompliance. “The company changed its plans and no longer actively rectified the deficiencies to come in line with EU-GMP according to the mutually agreed reasonable time frame.”

Zenabis Global trades on the TSX Exchange as ZENA.