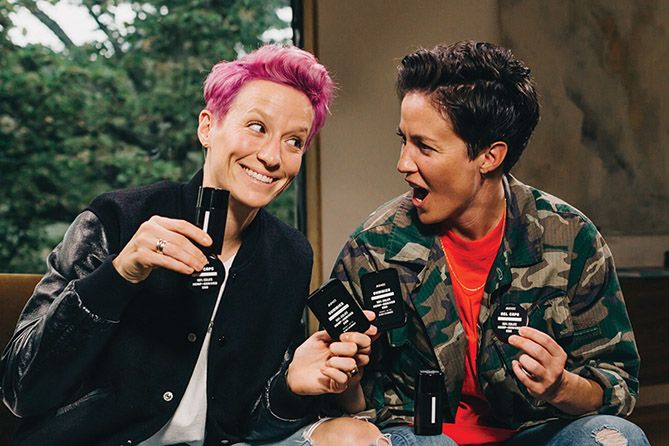 Major League Baseball announced in December that it had removed cannabis from its list of banned substances, permitting active players to use hemp-derived CBD products. In February, NFL team owners approved the terms of a deal that would do much the same—and more. Which begs the question: If CBD products are fine for professional athletes, why not amateurs?

As CBD use and acceptance increases, more opportunities for companies interested in working with athletes exist within the amateur market—from teenagers to adults engaged in all kinds of sports.

The potential pool of customers is large, given that millions of Americans play basketball, baseball, hockey, golf and other sports in their spare time. These same amateurs might turn to hemp-derived CBD to ease sore muscles and joints.

“We all have an endocannabinoid system, and everyone needs to feed it,” said Rachael Rapinoe, CEO of Portland, Oregon-based CBD company Mendi. Rachael  also is the twin sister of Megan Rapinoe, 2019 Women’s World Cup Most Valuable Player and 2019 Sports Illustrated Sportsperson of the Year.

To reach amateur athletes, CBD companies are employing numerous marketing strategies through their websites and social media channels. They also are deploying brand ambassadors and signing endorsement deals with big-name athletes. And before the COVID-19 outbreak, company leaders also attended sporting events and other non-industry-related shows across the country to promote their products to athletes.

According to Brady Bell, CEO of Evergreen, Colorado-based Pure Spectrum, which sells a line of hemp-derived CBD tinctures, topicals and isolates, amateur athletes represent a majority of the company’s customer base.

Bell believes his products can help athletes, and he suggests high school athletes consider taking CBD. At press time, Pure Spectrum was planning to bring on a high-profile athlete to launch its “Cannabinoid Kids” campaign.

Bell said the main concern, especially among parents of high school athletes and military personnel, is whether the product contains THC—for which a person may be tested and perhaps suspended or, in the case of the military, lose a career.

That said, the high school market is huge. The number of participants in high school sports in 2017-18 reached nearly 8 million, according to a survey conducted by the National Federation of State High School Associations.

“If you don’t have the ability to show where your product comes from, what it contains and why it helps, you’re not going to get in front of these entities,” Bell said.

He advises companies looking to approach schools to take it slowly. “Talk with parents and coaches behind closed doors,” he said.

“Whether it’s for football or basketball, baseball or tennis, CBD is preventative, like vitamin C. It should be taken every day. But if you don’t get into that circle of trust, it’s not going to happen.”

Bell said he has established relationships with high schools in his local community in Colorado. He also sponsors fourth-grade basketball and football teams in his Kansas hometown.

“I pay for their expenses and help them with getting into tournaments around the U.S., ” Bell said, noting that both Kansas teams won state championships.

How does he approach the parents of high school athletes?

“When I start discussing CBD with parents, I always start with our proven testing protocols,” added Bell, whose 12-year-old daughter competes in kickboxing, jiu-jitsu, track and basketball and takes CBD daily.

“It’s a slow process, setting times to talk to parents, educating and trying to change mindsets,” he said. “But that’s the way we build trust and relationships and educate about how these products can help.

“We aren’t out here actively selling to kids; that isn’t the strategy. We are being active in the educational aspects and the ‘why.’ It’s all about education.”

Eric Smart, CEO of Denver-based Myaderm, came to the CBD industry as a former executive in the food manufacturing and commercial pharmacy industries. Myaderm makes hemp-derived CBD creams for athletes and active people and sells them online and at brick-and-mortar retail outlets.

“If you’re going to get into this market, you need to look at the regulations and meet the requirements,” Smart said. “Follow the rules and make products meet the standards.”

For example, companies can’t make medical claims, and they must list the correct amount of CBD and/or THC in their products.

In terms of marketing, Smart said Myaderm hasn’t sought out sponsors or partnerships with athletes. He continues to do sales through the company website and e-commerce sites. The company also has an active social media presence.

All the Right Moves

Pure Spectrum also uses social media and live events to pitch its products to amateur athletes of all ages. Bell noted his company has been successful in using brand ambassadors such as former NFL star and sports commentator Shannon Sharpe to promote the company’s products online and using live platforms.

“We worked with the Denver Broncos Alumni Association and had 24 players come out to our grand opening back in 2015, ” Bell said. “Seventeen former L.A. Chargers came out to the opening of our retail space in San Diego.”

Athletes from the Ultimate Fighting Championship (UFC), the mixed-martial-arts arena and CrossFit were also among the first entities with which Bell built relationships. In addition, they were among the most receptive to his outreach and marketing.

Jeff Novitzky, the UFC’s vice president of athlete health and performance, “was very open-minded and willing to learn about our products as well,” Bell said. “Every sport at every level has a bureaucracy, but the best ones listen to their athletes and let them have a voice.”

Meanwhile, Mendi has looked beyond women’s soccer and was recently asked to pitch the NFL Players Association.

“Our core mission is to improve the lives of all athletes—those obsessed with working out and living the most healthy and active life possible,” Rachael Rapinoe said.

To date, Mendi has directed most of its resources and marketing toward the soccer community. Soccer and basketball players have so far been most receptive to the brand, which counts gummies and salve sticks as its best sellers.

To help promote its line of products to those 18 and older, Mendi partners with high-profile professional athletes to reach that fitness-focused consumer base.

“By signing Megan Rapinoe as our first athlete ambassador, sponsoring two National Women’s Soccer League (NWSL) teams and getting eight NWSL players on our cap table, our tactics were very bold and clear: completely embed ourselves in soccer and own this space, which we’ve done,” Rachael Rapinoe said.

“We want to continue expanding our multi-league partnerships,” Rachael Rapinoe said. “However, we want to make sure it’s not a league or market that’s already flooded with CBD companies. It’s all about relationships, quality products and foresight.”