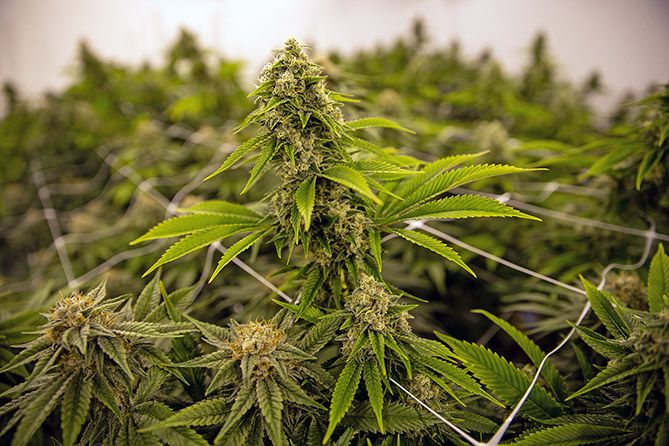 Nearly every marijuana cultivator wants to call its cannabis craft. Whether the plant is grown indoors or outside, with a hydroponic irrigation system or a watering can, under the sun or high-tech LED lights, few growers want their flower to be considered corporate cannabis.

A marijuana company that appeals to the masses on a large scale with lower quality and cheaper prices is probably well on its way to becoming a reality in the industry, but few companies will admit aspiring to that as an ambition.

As a general philosophy, a cannabis grower looking to brand its flower as craft needs to show the consumer that the flower was grown with mindfulness and close attention paid to each plant.

Although their methods may differ, growers can come to a closer consensus on what the final product should look like.

More specifically, several growers agree that for flower to be called craft cannabis, it should smell “clean,” like the terpenes that the strain ought to contain, not like the nutrients or media it was grown in. The crystals on the flower that generate terpenes, known as trichomes, should be intact after the harvest is completed.

Hand-trimmed cannabis is generally preferred over machine-trimmed flower, with connoisseurs often believing the former better expresses the characteristic structure of the plant.

“You have to represent the most sought-after expression of the strain,” said Kristin Nevedal, a Garberville, California-based cultivation expert and executive director of the International Cannabis Farmers Association. “This is a seed-to-package mindfulness all the way through. You’re shooting for a very high-end luxury product that people are going to come back to time and time again.”

A Question of Lighting

While it can be tempting to declare that only cannabis grown under the sun can be called craft, the regulations of many states don’t allow outdoor marijuana cultivation.

Scott Reach, a master grower and owner of Denver-based Rare Dankness, doesn’t believe the type of lighting or cultivation structure—or lack thereof—is as important as a cultivator’s attitude toward the business.

“It’s the intention of what you’re doing with that plant and how mindful and respectful you are to proper harvest dates and handling instead of just treating it as a commodity,” he added.

Wood had been using the sun for his only light, but he found that the new system produces higher-quality flower and plants that are a more manageable size.

“When we were growing those full-season monsters, you had to move a 14-foot ladder to each plant to really check them out,” Wood said. Now, “we can walk along and none of them are taller than my eyeballs, so I can keep a much closer eye on them. (It’s) more manageable that way.”

Careful canopy arrangement is essential in creating a craft product. Growers agree that giving plants as much space as possible helps to improve the quality of the flower because they get maximum light exposure and increased airflow.

Ryan Tonsberg, head of cultivation for Oakland, California-based Nug, spaces out his plants much farther apart than the industry standard. Whereas many grow rooms will have 14-24 plants under one light, Tonsberg has only seven plants per light. Nug places approximately
15 plants on each 4-foot-by-8-foot tray, which leaves about 1 foot of spacing around each plant.

“We like to have more space and more airflow between the plants,” he said. That helps to reduce the potential for growth in microbials, including mold and powdery mildew.

With smaller batches of plants, he’s able to thoroughly sterilize and clean his rooms between each planting and harvest, which helps to keep the pests out and the quality up. The Farm uses products from BioSafe Systems to sanitize. For hard surfaces, they use a blend of hydrogen peroxide and peracetic acid.

“When you have small batch, it’s important to have that spacing where you’re not pushing to produce more because it’s a smaller facility,” Billings said. “If you put too many plants in your small-batch room, you’re just going to create pathogens.”

Nevedal is strictly against hydroponic systems for a craft cannabis operation. Instead, she considers drip irrigation, dry farming and hand-watering acceptable.

“When we start moving away from traditional forms of agriculture into more industrial models, I think we lose the craft component,” she added.

“We have a very firm commitment in trying to create a high-quality, environmentally friendly product,” he added.

Both Nevedal and Wood are advocates for living soil, or plant-based growing media centered on compost with an active microbiology and biodiversity.

Wood uses only organic soil amendments and tries to avoid excessive inputs, particularly too much fertilizer and synthetic nutrients. He finds his plants have better terpene expression when he adds fewer inputs.

“I definitely believe that our inputs and the flavor of our cannabis are correlated,” Wood added.

For Nevedal, a healthier soil teeming with living microorganisms aligns with her craft ethos. She recommends growers brew their own compost teas to add nutrients to the soil.

She also uses organic amendments that won’t kill off natural bacteria or other beneficial organisms. The process also avoids additions that can negatively influence the taste of flower.

“When I think of craft cannabis, that high level of care is building a living soil,” she added. “It’s being able to utilize mindful practices to focus on quality.”

Growing cannabis correctly is only half the battle. Harvest can separate a run-of-the-mill grower from a craft cultivator, according to Reach.

“A lot of people fail at that,” he said. “Drying and curing and ultimately storage is what defines craft. There’s plenty of people who just grow it, cut it down, dry it and sell it.”

Reach takes a little extra time to make sure he’s preserving terpenes and THC content. One way he does that is by harvesting an entire room at once, then drying cuttings all together and not adding any new plants until the first ones are dry.

That way, “you’re not reintroducing wet product to dry product,” he said, “which can kill flavor and smell.”

For Nevedal, a good harvest is all about timing.

“If you harvest right as that plant is peaking, you have the most beautiful trichomes, the highest oil residuals,”
she said. “With craft, you’re listening to the plant in that way, so you’re maximizing quality.”

While some cultivators might use machines, conventional wisdom is that for flower to be considered craft, it should be hand-trimmed.

“We hand-trim everything we sell under our brand,” Reach said.

“You’re going to be able to maintain the integrity of the trichome structure more so with a hand-trim,” she said. “If you have very skilled hand-trimmers, they’re at the forefront of your quality control.”

By employing people rather than machines to trim flower, growers get another round of eyes on their product. This added step should help catch anything undesirable like mold, mildew or deformities before it goes to retail and, eventually, to consumers.

“There could be a day somebody comes up with a machine that gets it right,” Wood said. “But I don’t see taking the people out (of the process). A lot of the stuff that’s been through a machine looks butchered.”

The Art of the Cure

Once plants are cut down at the right time, how they’re dried and cured is a crucial step to ensure that craft level of quality.

Reach uses rigid bins that he can sterilize and clean between harvests. That prevents trichomes from getting broken, buds from getting mashed and overall mishandling.

Nevedal advocates for hand-curing and hand-picking.

“This is kind of what I think of as craft in other places,” she said. “It’s not the industrialized, mechanized process when we’re looking at other products.”

She’s also a fan of wood-fired cure, where a wood-burning stove is set up in a shed to dry out and cure the cannabis.

Tonsberg hangs his plants upside down in a dark room. To test whether they are ready for packaging, he tries snapping off the fan leaves. When the leaves snap right off, he knows they have reached the proper internal moisture content.

“If you don’t try to speed it up and you wait the 10 days, you’re going to have a nicely cured product,” he said.

In the end, Tonsberg asked the question that all craft growers looking to scale up should consider.

“Can you apply this craft mindset to a larger setting?” he asked. “My answer is yes. I believe so.”