A law forming the legal foundation for a medical cannabis industry in Barbados has overcome the last important parliamentary hurdle after being approved by the Eastern Caribbean country’s Senate.

The law, which covers activities related to cultivation, processing, dispensing and export, empowers the Medicinal Cannabis Licensing Authority to develop policies and guidelines for a newly regulated medicinal marijuana industry.

The Senate passed the Medicinal Cannabis Industry Bill at close to midnight on Nov. 27, two weeks after it won approval in the House of Assembly.

ADVERTISEMENT
The Senate concurrently approved the Sacramental Cannabis Bill, 2019, which allows a person who adheres to the Rastafarian religion to consume and cultivate marijuana as a sacrament in worship.

The governor general signed off on both pieces of legislation, and they were published in the Extraordinary Gazette on Nov. 29, making them official.

The island will adopt a tiered approach to cultivation and processor permits, ranging from Tier 1 for small-scale cultivation to Tier 3 for large-scale farms.

Barbados will require license holders to be citizens, permanent residents, hold immigrant status (which can be gained through investing) or be a citizen of a Caribbean Community (CARICOM) member state.

The Cannabis Industry Bill allows medical cannabis to be prescribed by a practitioner to Barbadians or visitors to the island.

The bill moved through the parliamentary process quickly after being first introduced in August.

Sen. Crystal Haynes clarified that the new law does not legalize cannabis for anything other than medical use.

“It seeks to establish a clear national licensing scheme, where there will be a closed loop from seed to sale for the cultivation, processing, manufacturing and export of products derived from cannabis,” she said in the Senate.

The law mandates the creation of the Barbados Medicinal Cannabis Licensing Authority, which will develop regulations to govern the industry.

The agency will be responsible for:

After the agency is formed, it will be required to develop standards and codes of practice to be observed by licensees, as well as determining fees.

Business licenses will be available for:

Licenses will be valid for three years and are not renewable.

Tier 1 cultivation licenses are limited to less than 1 acre. Second-tier permits will be limited to 1-5 acres and Tier 3 license holders will be allowed to cultivate more than 5 acres of medical cannabis.

Medical cannabis may be dispensed in a pharmacy or at a therapeutic facility.

A therapeutic facility is a premises that has been granted a Retail Distributor License to sell, dispense or provide medical cannabis prescribed or recommended by a medical practitioner.

Dispensing may be conducted only by a pharmacist or authorized personnel under the supervision of a pharmacist.

Where a prescription or recommendation by a medical practitioner requires repeated usage of medical marijuana, a pharmacy or therapeutic facility will not be allowed to supply more than 30 days worth of medicine. 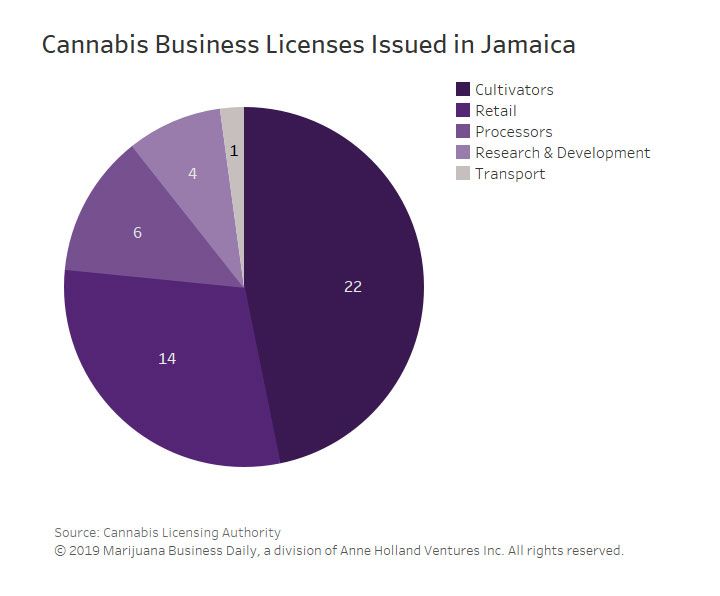