Contrary to popular belief, not every business is thriving in the Green Rush.

Some cannabis companies are teetering on the edge of insolvency – whether it’s from intense competition in a maturing market, new regulations or just plain poor management.

While this happens in every industry, businesses that handle marijuana face a unique challenge: Filing for bankruptcy, a key protection for entrepreneurs, usually isn’t an option because cannabis is illegal under federal law.

“Any business in any other industry would have the ability to file for bankruptcy and go through that process and get out from under the business,” said Kris Krane, managing partner at the national cannabis consulting firm 4Front Advisors.

But marijuana companies “can be saddled with huge amounts of debt, much of which the owners themselves will wind up being responsible for. It can drain somebody’s entire life’s savings and ruin their business and their lives,” Krane said.

As the industry matures and competition grows, more entrepreneurs could find themselves in this situation going forward.

Marijuana Business Daily spoke with Krane and other industry experts to get some pointers on how cannabis companies can prepare for and weather a worst-case financial scenario. Here are some of their suggestions.

It’s important to consider the possibility of future financial struggles when first forming a company.

The business structure you choose – such as a sole proprietorship, limited liability company, corporation or nonprofit  – will affect your options down the road should you run into trouble.

Most cannabis businesses immediately rule out a sole proprietorship, which essentially offers no protection for owners if the company falls on financial hard times and winds up with a big debt load. 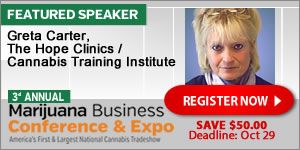 The most popular options:

“LLCs are so easy,” said Hank Levy, a certified public accountant in Oakland, California, who works with numerous marijuana companies. “They’re easy to form, they’re cheap to maintain, you don’t need a lawyer, you don’t have the corporate niceties. Plus… they’re more tax efficient.”

The flip side is that owners of LLC’s are held personally liable for taxes. So if a marijuana LLC gets into financial trouble and is forced to shut down, the government can go after the owner’s personal assets to settle past tax bills.

C corporation: Under this structure, personal assets typically are kept separate from the company and can’t be seized as payment for debts the company owes, said Christian Sederberg, a Denver attorney who specializes in marijuana law. It’s much more difficult for creditors to legally get at an owner’s personal savings or assets, no matter how in debt the company may be.

The trade-off? C corporations pay federal income tax, whereas S corporations do not. So registering as a C corporation could actually contribute over the long term to your financial hardships.

Nonprofit: Marijuana nonprofits offers similar protections as C corporations and are taxed the same way. But, of course, nonprofits aren’t moneymaking machines for owners, so the financial rewards aren’t as high.

Whether to form a nonprofit as opposed to a corporation or an LLC may depend on the state and what types of regulations are in place. As far as the federal government is concerned,  though, “they’re all drug dealers,” Krane said. As a result, bankruptcy isn’t really an option.

Another aspect to keep in mind when starting a marijuana business is that investors will often try to get what are called “personal guarantees” in writing. This usually involves having the owner pledge personal bank accounts, homes or other assets as security for the investment or loan.

If the company gets into hot water financially and defaults on the loan, the owner could lose everything to the creditor.

“What they’ll do is say, ‘I also want you, the owners, to give a personal guarantee.’ And often times, that’s what it takes to get a large loan,” Sederberg said, adding that entrepreneurs need to be careful with what they sign.

When The Bottom Falls Out

The good news is that even in the worst-case scenario, there are almost always options.

In some markets like Colorado, for example, cannabis retailers can sell and transfer their business licenses to other interested parties, said Denver attorney Sean McAllister. That can go a long way toward paying off a company’s debt.

“Most of my people end up selling before they go bankrupt,” McAllister said. “There’s enough of a market for these licenses that it’s surprising to hear that some people are going bankrupt. People are selling businesses for hundreds of thousands if not millions of dollars right now based on future performance, not even current performance.”

How much a particular business can get in a sale depends on a variety of factors, incluing whether the company owns or leases its space, what kind of equipment or assets might come with the deal and if there is any unsold inventory. It also may depend again on particular state regulations, and whether a business license is transferrable or not.

Even selling off a full dispensary, complete with a grow operation, might not cover a business’s debts if the company goes completely under, however.

In that case, said Sederberg, it’s time to negotiate. Sit down with creditors, lay out the hard truth that they probably won’t be getting all their money back, and see if a deal can be reached.

“That’s going to be a lot of peoples’ best bet,” Sederberg said.

And then of course you might be able to literally just walk away from a business that failed, leaving creditors out in the cold.

“If you don’t care about any of your creditors, then you have to get some advice about (whether you can) walk away from them or not,” Levy said. “Then it comes down to what kind of entity you are.”

One thing to watch out for, warned Krane, is predatory lenders who are constantly looking for companies in trouble. They offer loans to help keep the company solvent, but with sky-high interest rates.

“We see this fairly often,” Krane said. “There are more and more lenders who are springing up across the country who are willing to loan money at rates that are overly aggressive or even predatory.”