By John Schroyer and Chris Walsh

Hundreds of medical marijuana dispensaries and recreational shops across the country abruptly lost their cashless ATM accounts on Wednesday with no explanation, according to sources close to the situation.

One insider told Marijuana Business Daily that at least 300 to 400 shops were affected, and he warned that the number could double in the next few days.

Several sources who spoke about the situation asked not to be named, saying it could harm their businesses.

Many of the companies affected are reportedly rec shops located in Colorado and Washington State, though some medical cannabis dispensaries in those states and other markets lost their cashless ATM services as well.

The businesses were not given any advanced notice – the cashless ATMs simply stopped working. As a result, the shops can only take cash until they find another solution. 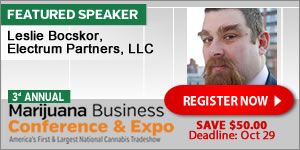 Cashless ATMs are PIN-based systems that allow patients to use their debit cards or get a cash advance on their credit cards, which can then be used to pay for cannabis. The card charges are recorded as withdrawals, without specifying what the money is used to purchase.

The reasons behind the move are unclear, but one source said that most of the accounts are tied to MetaBank – a major financial institution supporting ATM services. Many other cashless ATM services affiliated with other banks and processors reportedly are still up and running.

Businesses that lost their accounts had to scramble to accommodate customers, and some lost revenue as a result.

“We found out about this issue first-hand when ours went down this morning,” Kayvan Khalatbari, co-founder of Denver Relief in Colorado, said on Wednesday. “We’ve had to move to all-cash today. It was pretty frustrating. We lost some business when that went down and customers didn’t have any cash on them.”

Denver Relief already has a new cashless ATM service provider lined up, and it should come online this week. Khalatbari said his shop lost 30% of its sales after experiencing a problem with its cashless ATM service in the past, so the long-term repercussions for stores that can’t find an alternative could be huge.

One source speculated that the move could be a result of pressure from the feds.

Another insider close to the situation offered a different explanation, though.

A few businesses apparently deliberately obscured the nature of cannabis-related accounts, according to the insider. The processor and bank found out and basically said “we’re shutting all your accounts down, and they should be deactivated by the end of business (Wednesday),” the source said.

The Washington-based financial services firm Guardian Data Systems even took the step of sending out an email blast Wednesday night to its clients, warning them of the situation and assuring them that Guardian had not been affected by the shutdown.

“We have been told that all terminals and ATMs located in dispensaries will be deactivated by the end of the day TODAY,” the blast reads.