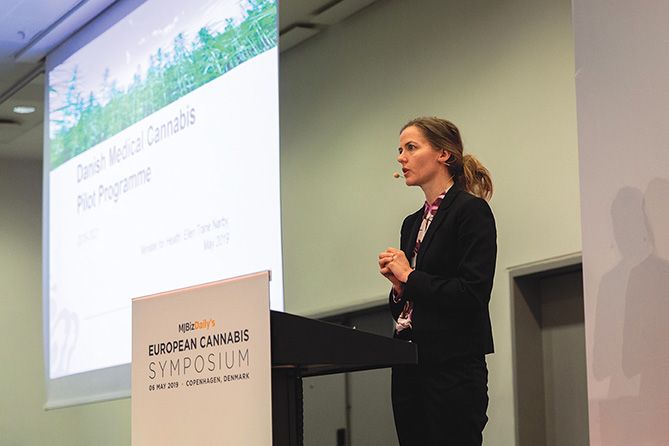 “I think there will be some changes. We have all parties and 179 members of parliament backing the scheme (plan) today. So, even with a reshuffling of parliament, it will never reshuffle so much that it jeopardizes the whole scheme,” Nørby said during MJBizDaily’s European Cannabis Symposium while she still was serving as minister of health.

So far, business is booming: More than 2,500 patients have accessed medical cannabis through the pilot, far exceeding the 500 patients the Danish Medicines Authority had expected to join the trial program.

Businesses from Denmark and Canada already have committed hundreds of millions of dollars to the pilot program, and that’s just the tip of the iceberg.

Currently, Denmark imports all its cannabis from Canada and the Netherlands, so prices are high and product selection is limited. That’s going to change when domestic production and distribution commences this summer.

“We believe that within hopefully a few months or half a year, we’ll also have Danish products on the shelves,” Nørby said. “We do think there will be much more competition, which will drive down prices, and then there will be a greater number of products to choose from. The way forward for Denmark is to provide businesses with good conditions to participate in the scheme.”

Imports will still be allowed after domestic production starts, but products will have to be free of pesticides and EU-Good Manufacturing Practice certified—two requirements that do not already exist.

Marijuana Business Magazine spoke with Nørby about the future of the medical marijuana industry.

The trial period is going to be evaluated twice—next year and at its four-year conclusion. Can you elaborate on how it will be analyzed?

We will take into account numbers and facts, but we will also follow up on any clear clinical evidence that has been put forward—in Denmark and in other countries—because we have a lot of testing going on around the globe. Of course, those (results) will be part of the evaluation.

For some patients, if they have a livable life (because of medical cannabis) that they didn’t have before (the pilot scheme), that is also something that has to be taken into consideration.

What kind of regulatory improvements would you like to see across Europe?

European legislation has to be on a more level playing field, because it is not today. It’s not only about the Danish legislation. … When it comes to CBD, you need Europe-wide standards. There are unequal competition conditions for companies right now, and it really makes it harder for patients, consumers and businesses to navigate through the system. The risk of the noncertified products getting onto the shelf is also much higher if you do not have a
controlled system. And CBD is a big part of the market.

What kind of regulatory or legislative improvements would you like to see in Denmark?

On cultivation, having clarity on how you can produce. It’s a plant. It needs nutrition to grow, and it’s not completely clear what the rules are.

There needs to be clarity—not necessarily on pesticides, but on some of the things you normally use in organic cultivation within European countries (for cannabis cultivation). What can be used and how much? That is something we are working on.

It will demand a change in legislation, because right now, the cultivation scheme does not have an agricultural focus on what is allowed in the production of cannabis plants. That will be up to the next Danish parliament to figure out, but it is also a question for European (Union) legislation.

What lessons did Denmark take from other countries when it created its regulations?

We went to the Netherlands, Israel (and) Canada. We talked to a number of producers, and we kind of took what was workable and turned it into a Danish scheme. Our system differs from North America in that we see medical cannabis sales through pharmacies. We think that’s the right way if you really want to underline that it’s for patients: It has a positive effect on health and is not recreational.

What can other countries borrow from Denmark’s system?

I know that a number of European countries have copied our legislative cannabis scheme, so I think we can learn from each other.

It’s important to be attentive going forward because things can get extremely complicated and (the program) can stall.