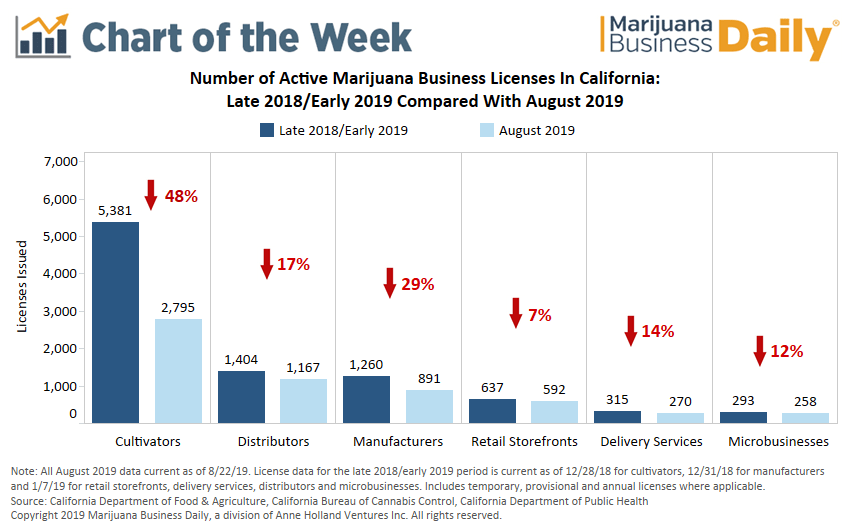 Before January 2018, when California launched its legal recreational cannabis market, estimates of how many dispensaries peppered the state’s landscape were in the thousands.

But once state licenses were required – and with that, express local city or county approval – the number dropped dramatically, to just a few hundred.

That was the first instance of serious market contraction in California, but it’s far from the last as the state tries to clean up after decades of gray-market sales.

ADVERTISEMENT
The second contraction has taken place over the course of 2019, as temporary business licenses slowly expired. State regulators were required by law to stop issuing or extending temporary licenses as of Dec. 31, 2018.

All that’s left in the legal market today are companies that were able to obtain either provisional or annual cannabis business permits, a pool significantly smaller than the original group of temporary licensees.

The reasoning for that is simple: Temporary licenses were fairly easy to obtain and didn’t require much in the way of compliance with state or local business codes.

That often led to companies obtaining temporary permits but, in many instances, never even beginning operations.

Cultivation is the most obvious example of that: Many large-scale growers, for instance, signed up for dozens of cultivation permits that simply went unused, and, once they expired, were discarded.

Provisional and annual permits are very different, and they involve a much heavier lift by business owners. That meant there was always going to be a second round of license contraction, making the legal market even smaller than it was in 2018.

That’s not to say those numbers won’t rebound. They likely will over time, as state regulators continue processing more and more business license applications.

More cities and counties will likely open their doors to the industry in the coming years as well, which will provide yet more licensing opportunities –  and several are already underway, such as in Los Angeles.

But for now, the immediate takeaway for entrepreneurs both already in California and those eyeballing the immense potential of the state’s marijuana market is there aren’t unlimited plant-touching business options.

And the level of compliance required to get a provisional or annual permit is an incredibly high barrier to entry, often requiring months of work and millions of dollars in capital.