Canada’s federal health regulator is proposing a new category of cannabis that could potentially open up a huge market in which marijuana is used for the therapeutic treatment of humans and animals for minor ailments.

Health Canada is asking the public to submit feedback on the new category – called Cannabis Health Products – via a consultation paper before eventually advancing draft regulations.

The agency’s public consultations are only the first step, and any new products wouldn’t be available until 2020 at the earliest.

Any new regulations would fill a gap in the current federal framework that does not provide a legal pathway to market for a drug containing cannabis that makes a health claim and could be sold without practitioner oversight.

The proposed rules would change that.

Health Canada would leave it up to provinces and territories to determine where Cannabis Health Products (CHPs) could be sold within their borders.

That means CHPs for human and veterinary uses could be sold at pharmacies or pet stores under certain conditions, provided they are in line with federal requirements. Online sales also would be allowed.

Among the biggest winners would be makers of CHP products targeting pets and humans as well as CBD manufacturers.

Rules advanced in the the consultation paper would provide significant clarity and will save people from unintentionally breaking the law, said Sherry Boodram, CEO of Toronto-based regulatory consulting firm CannDelta.

“Currently, there are a lot of conversations and misinformation among the general public in regards to cannabidiol, specifically if CBD products can be freely imported/exported, can it be sold in health food stores, in beauty stores,” she said.

Potential benefits to animals will be also considered, she said.

Lucas McCann, chief scientific officer at CannDelta, said the proposals represent a potentially huge win for those that are trapped between the cracks of the adult-use and medical markets.

“What Health Canada is doing with the consultation,” he said, “is setting the framework for these CHPs to come into existence and to tie scientifically founded, evidence-based claims to cannabis health products.

“These are baby-steps, but let’s not forget that legalization is a big ship to steer.”

According to the consultation paper, legal oversight of Cannabis Health Products would belong to the Food and Drugs Act, while respecting objectives of the Cannabis Act.

These products would be able to make authorized health claims to treat minor ailments based on evidence.

Cannabis must be listed as an active ingredient and evidence would need to sufficiently demonstrate the association of the ingredient – i.e., specific phytocannabinoid – with the health claim.

Health Canada said it will seek expert advice regarding the level of scientific evidence necessary to show that products could be used safely and consider how both existing and new scientific studies could be incorporated into the review process.

The consultations will be conducted until Sept. 3.

The survey can be found here and the consultation paper here.

As for timing, Deepak Anand, CEO of Toronto-based cannabis firm Materia Ventures, warned against expecting new products being sold anytime soon based on several factors, including federal elections in October. 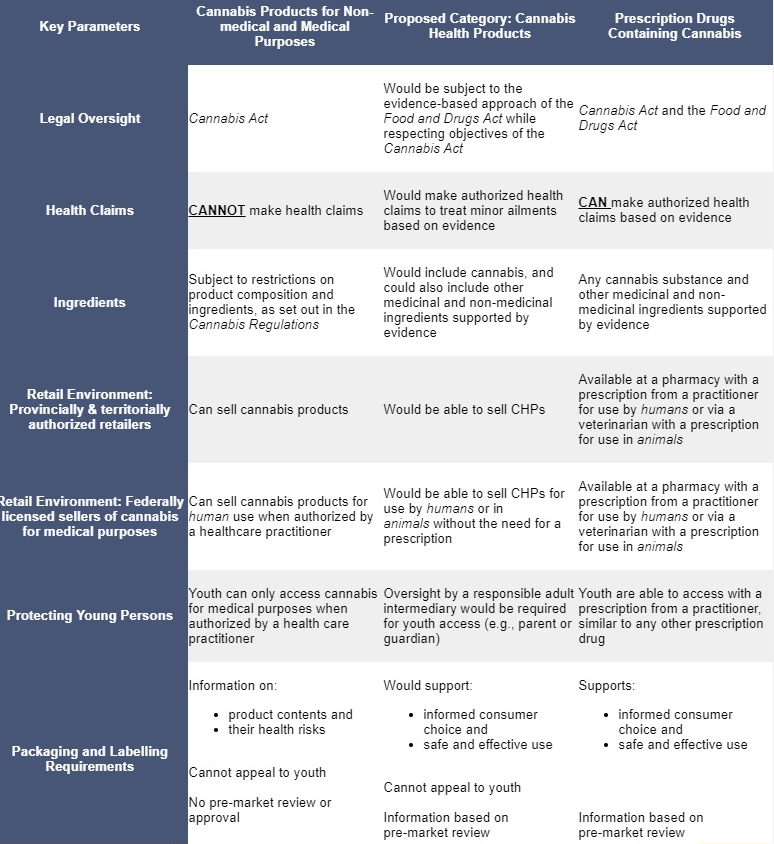