Add the best outdoor marijuana crop in years to an already flooded market, and it’s like taking sand to the beach.

Cannabis cultivators across the United States are reporting this year’s fall harvest – known in the industry as “croptober” – produced a stellar crop thanks to favorable growing conditions and little to no adverse weather events.

But with growers in states such as California, Colorado, Michigan and Washington already seeing rock-bottom wholesale prices, a flood of cheaper, outdoor-grown flower hitting the market in the coming months could push prices even lower.

“That was actually one of the cleanest air-quality years we’ve had. There’s going to be a lot of really good pot out there,” said Jeremy Moberg, a cannabis grower in Washington state.

“Probably going to add to the overproduction problems and woes that you’re hearing a lot about.”

Limited wildfire impact, no early freezes and warm days well into October all led to optimal growing conditions across the country.

“It’s been phenomenal,” said Van McConnon, a cannabis consultant based in Boulder, Colorado.

One silver lining for growers in states such as California and Colorado is that the continuous low prices have caused some larger cultivators to opt out of planting and instead leave their fields fallow this year, reducing competition somewhat.

MJBizDaily spoke with cultivators and industry analysts in Michigan, Colorado, California, Washington state, New Mexico and Vermont to see how the fall harvest shaped up.

Here’s what they said.

Michigan might not be the first state people think of when it comes to outdoor-grown cannabis, but that would be an oversight.

The state has more than a million sun-grown plants tagged in the seed-to-sale tracking platform Metrc, according to John McLeod, co-founder and head of markets at Cloud Cannabis Co., a vertically integrated marijuana company based in Troy, Michigan.

Growing conditions this year have been ideal for outdoor cannabis, he added. No natural disasters or extreme weather events to disrupt the harvest.

“Michigan has been able to do that very nicely. We have really good water. We have a really good summer grow season. “It’s pretty ideal weather for outdoor cultivation here.”

Yet prices for that sun-grown flower are on the lower end of the spectrum, according to McLeod.

And while this year has been a good growing year, that many plants being harvested for such low prices might lead some outdoor growers to scale back their production next year, he added.

“You might see (growers) that say, ‘Hey, look, growing a whole season outdoor and only getting $100 or $200 per pound, it really doesn’t average out at the end of the day,'” McLeod said.

In past years, outdoor growers in southern Colorado have encountered early September freezes and snowstorms that caused millions of dollars in crop loss.

Other parts of the state have had to contend with wildfires and hailstorms.

A strong crop means a lot of supply.

But McConnon said some of the larger outdoor farms with dozens of acres in production decided not to plant this year, so the smaller grows might have an opportunity to find buyers.

The smaller and midsize growers have also reduced capacity as prices have fallen.

“The wholesale market has just fallen through the floor,” McConnon said.

“I’ve never seen and, frankly, never anticipated prices like this.”

In July, for example, the wholesale price of cannabis flower in Colorado dropped to an all-time low of $709 per pound, down from $1,309 the previous year.

Raging wildfires the past few years have been a major factor affecting Emerald Triangle farmers in Northern California.

The fires destroyed cannabis grows and ruined nearby flower with smoke.

That wasn’t as much of an issue this year.

On the flip side, early fall rains can also be damaging, and some growers might have experienced that this year.

But overall, this has been a “pretty good year,” said Doug Chloupek, the CEO and founder of Juva Life, a cannabis grower and life science research company with a cultivation arm in Stockton.

“We had hot summers with a slightly more temperate climate leading into the October harvest here with our cooler nights,” Chloupek said.

“So I would expect that we’ll actually see some really nice quality flower coming from the traditional full-term, sun-growers out there.”

Similar to Colorado, a trend among cannabis growers in California this year was to let fields go fallow.

“Those are probably the smartest people,” Chloupek said.

“The overproduction of cannabis cannot be absorbed into the legal supply chain, which has created the falling price of cannabis.”

Chloupek characterized the economic situation for marijuana businesses in California as a “perfect storm of price catastrophe.”

“The next two years are going to be survival of the fittest because people have run out of liquidity and the capital markets have dried up,” he added.

“The well to go back to save your company on its deathbed no longer exists.”

The outdoor cannabis season started off wet and cloudy in Washington, where Moberg operates a sun-grown cannabis farm near Riverside, in the north-central part of the state.

But the weather reversed later in the summer to hot and dry, staying that way through October.

“So if I were going to say in a word (how the season went), it would be ‘great,'” Moberg said. “With some challenges.”

The sustained hot weather meant the plants required more water than in other years, for example.

If growers had access to water, that meant their plants were able to mature fully as the cultivator tapered off irrigating.

Like Colorado and California, Washington has traditionally had some of the lowest wholesale prices for cannabis in the country.

But Moberg isn’t sure how this year’s good growing season will impact the overproduction problem.

For one, some people in the state also decided it wasn’t financially wise to plant this year.

“From what I hear from everybody, there was a drastic reduction in what was planted this year,” Moberg said.

Another factor: Moberg said the state’s regulatory agency, the Liquor and Cannabis Board, temporarily tightened its enforcement of people growing beyond their canopy limits this summer, which helped to curb the oversupply.

The New Mexico summer was mild without any major events affecting outdoor cannabis operations, according to Duke Rodriguez, CEO and president of Ultra Health, based in Bernalillo, New Mexico.

“The regulated market had a successful outdoor season,” he said, adding that he expects a glut of outdoor-grown cannabis this year.

Among the more than 600 growers licensed in the state, Rodriguez said a lot of the new licensees are outdoor growers.

“Because the newbies have leaned heavily toward being outdoors, that’s where we’re going to see this flooding, and it’s going to be massive,” he added.

That anticipated glut has already dropped the price of wholesale flower in the market.

Earlier this year, Ultra Health was paying $1,500 a pound wholesale.

Rodriguez said his company is now buying wholesale pounds of flower for $850 and can buy lots of more than 1,000 pounds at that price.

“The bottom has fallen out,” he said.

One outlier is the relatively new recreational marijuana market in Vermont, where prices are still in the $3,000 a pound range on the upper end of the wholesale market.

The fall growing season saw some rain in September.

That caused some outdoor growers to take down their plants early and dry them with the hopes of salvaging the yield, said Jason Mielcarek, director of cultivation at Ceres Collaborative in Burlington, Vermont.

The early moisture and humidity made it harder for the plants to fight off pathogens and botrytis.

“But the stronger genetics did well,” Mielcarek added.

“Anything that made it to October – October has been fantastic.”

Growers are hoping those prices will remain high into the new year.

“Due to the lack of supply and the new (adult-use) market, that demand is so high,” Mielcarek said.

“Everyone can pretty much sell whatever they grow at this point.” 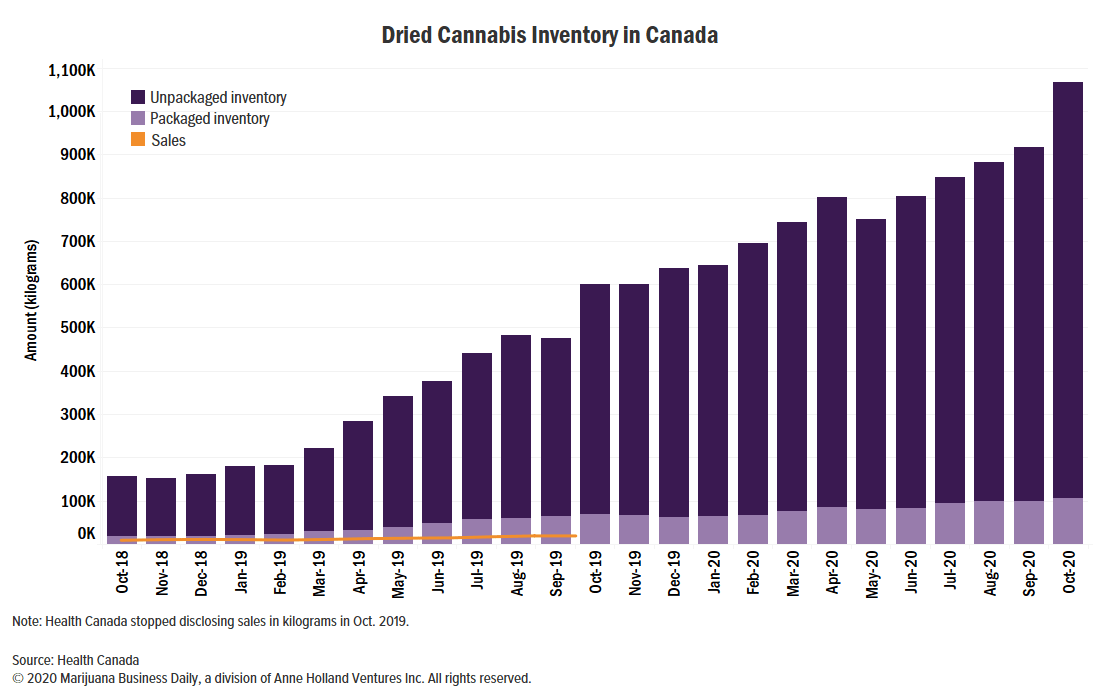