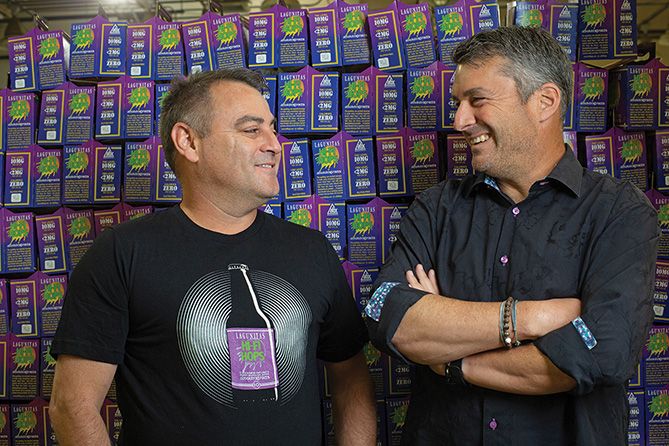 CannaCraft first partnered with Lagunitas—which is owned by Heineken International—in 2017 to create SuperCritical, a beer infused with cannabis terpenes. The alcoholic brew was released in August 2017.

In the latest joint effort, Lagunitas provides sparkling hop water inspired by its flagship IPA to AbsoluteXtracts, which adds THC and CBD and distributes the nonalcoholic beverage to dispensaries.

Bill Silver, president of new markets for AbsoluteXtracts’ parent company, CannaCraft, said the partnership is best described as a collaboration.

The team effort came about through the proximity of the two companies—they’re located in Sonoma County—and the friendships that executives of the two businesses formed by sharing a common affinity for cannabis and beer.

“It was in those nights of hanging out where the ideas of ways we might work together came together,” Silver said. “When (the partnership is) culturally in alignment and business is in alignment, it works better.”

Representatives from Lagunitas toured the AbsoluteXtracts facility and, after seeing the company’s CO2 extraction tanks, wondered what it would be like to run hops through the extraction machine.

That spurred the idea to add hop-derived terpenes to vape cartridges. Then the reciprocal idea: adding cannabis terpenes to a Lagunitas beer.

“They paired nicely, and it was a lot of fun,” Silver recalled. “People loved it.”

That collaboration was called SuperCritical, and even though the beer didn’t contain cannabinoids, the federal Alcohol and Tobacco Tax and Trade Bureau didn’t like it and forced it off shelves three weeks later.

After the beer was thwarted, the two companies pivoted. The brewmaster at Lagunitas suggested making a beverage from the days of alcohol Prohibition: a hop water that would retain the flavor of beer and could easily be infused with cannabinoids.

It took the companies about four months to get the product to market.

“If you ever create anything in cannabis, there are always challenges,” Silver said, referring to issues such as taste, the infusion process itself and marketing.

To help create a beverage that customers would drink, Lagunitas offered the uninfused sparkling water at its tap room in Petaluma and encouraged feedback.

Silver said the product received a response positive enough to warrant it be sold on its own, without the cannabis addition.

Then came the secondary challenge of how to infuse it.

According to Silver, figuring out the chemistry of how to infuse hop water with emulsified oil as well as the correct container to sell it in all factored into the decision-making.

The two companies spent much of 2018 stress-testing the product before it was fully launched.

“In early 2018, before Hi-Fi Hops launched, CannaCraft worked to increase the shelf life of the product and maintain flavor consistency before going to market,” said Ned Fussell, co-founder and chief growth officer for CannaCraft.

The next difficulty was deciding how to market the water. Ideally, the marketing would distinguish the product from nonalcoholic beers already on the market.

Lagunitas was even struggling to decide where to put the non-infused beer on the supermarket shelves. Should it be next to the sparkling water or the beer?

“You have to put it in the hands of consumers,” Silver said.

A major juncture in product development came when Hi-Fi Hops was sold at the Outside Lands Music and Arts Festival in San Francisco, which drew a crowd of more than 200,000.

“To me, that’s a game-changing moment in the history of cannabis,” Silver said. Fans seemed delighted with the product.

To ease any hesitation that their mainstream partner might have about working with marijuana, AbsoluteXtracts personnel meet frequently with the folks from Lagunitas.

It worked, and Lagunitas has become more comfortable working with cannabis after “the sky didn’t fall” with the launch of Hi-Fi Hops.

Today, Silver said, the partnership is thriving. Hi-Fi Hops is available in California and Colorado with plans to expand the product to more states.

The next step for the collaboration is to continue expanding into states with legal cannabis programs. “We’re trying to get it out to the rest of the world,” Silver said.

“Colorado is full of beer and cannabis enthusiasts,” Hunter said. “They’re going to like how we’ve combined the two.”

Next case study: Casper | PLUS