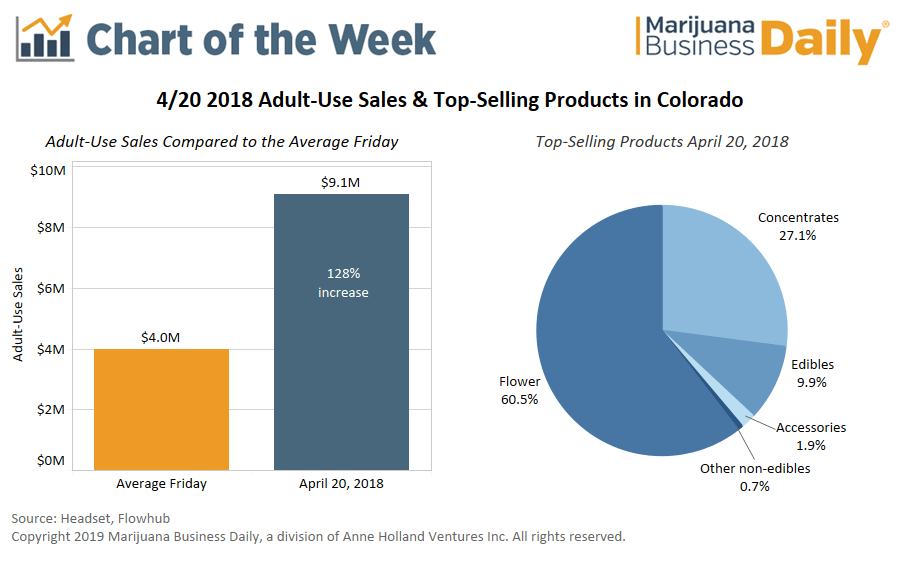 According to data provided by Flowhub, a Denver-based marijuana software company, and Headset, a Seattle-based cannabis analytics firm:

“In Colorado, we have a mature market with a large product selection that is hard to pass up,” said Lindsey Mintz, the co-owner of the Smokin Gun Apothecary, a marijuana retail store in Glendale, a city that neighbors Denver.

That assertion is backed by Euflora, the host of the 2018 Mile High 420 Festival in Denver, which estimated 70,000 people attended its celebration on the lawns across from the state capitol last year.

“The most recreational of recreational users – those that might only purchase one time a year – come out because of the huge sales and just to experience 4/20 and see what it’s all about,” she said.

This year marks the first time in Colorado’s legal recreational market that 4/20 falls on a Saturday, so retailers are gearing up for what could prove a record-setting weekend.

Zach Engel, an inventory manager for The Clinic, a vertically integrated Denver-based cannabis business, said the firm’s adult-use locations see a 15%-20% increase in sales throughout April and a 25%-30% increase the weekend before 4/20.

He also expects a 90% increase in sales of low-dose edibles, products that have less than 5 or 10 milligrams of THC.

Year-over-year, concentrates and edibles are taking market share from flower, but flower – which, in this data, includes pre-rolls – remains the top-selling product category on 4/20, Mintz said.

“Pre-rolls are easy,” said Dee Braack, the general manager of the Smokin Gun.

“You pick them up, and they’re ready to go.”

“The number of lighters, hand pipes, rolling papers and vape batteries we sell during different holidays is almost a 100% increase in sales,” Engel said.

“It’s the first-timers or occasional users who come in on 4/20 to be a part of the 4/20 experience, and they don’t have a working pipe or working lighter because they’ve never bought one.”