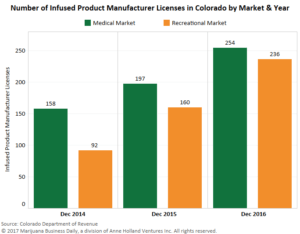 The surge reflects Colorado’s lack of business license caps, a resulting oversupply of marijuana, and retailers and growers diversifying into new products to boost margins in one of the nation’s most competitive cannabis markets.

The statistics tell the story of businesses branching into edibles and extracts to stay competitive. It’s also often cheaper for these retailers and growers to make their own products for sale – versus buying them from another vendor.

In one 24-month span – between December 2014 and December 2016 – the number of marijuana infused product manufacturer (MIP) licenses shot up 157% on the recreational side and 61% on the medical side. The number of recreational MIP licensees went from 92 a little over two years ago to 236 as of December. Licensees on the medical side went from 158 to 254.

And the license category is still growing. As of Feb. 1, the number of rec MIPs had increased to 246, according to the Colorado Marijuana Enforcement Division. Medical MIPs stayed the course.

“I think the issue is, you had a lot of rec growers come into the industry that don’t have storefronts. They’re putting the same-old same-old out, so converting (wholesale flower) into an extract is much more viable,” said Jake Salazar, founder and CEO of MMJ America. “You can make some pretty good margin on that, if you make good stuff.”

As a retailer, Salazar is part of that trend. MMJ America began making its own extracts about 2½ years ago, he said.

“We got a couple of MIP licenses to run our own extracts so we weren’t third-party sourcing them,” Salazar said. “When we go buy wholesale, it’s like, why would we even buy it? We’re trying to get rid of our own stuff.”

The reason is simple: Colorado allows for vertical integration among different cannabis businesses in a way that many other states do not. That means licensed marijuana retailers can obtain permits to grow marijuana and produce extracts or edibles. (By contrast, Washington state prohibits retailers from growing or extracting marijuana and bans growers from selling directly to consumers.)

MMJ America, for example, has five storefronts in Colorado, four grows and four MIP licenses. The company was founded before rec was legalized in 2012 so, by law, it had to grow at least 70% of the cannabis it sold under the state’s medical marijuana program.

Many of them have discovered it’s cheaper to produce their own extracts and concentrates than to buy from another vendor.

“If you’re making your own concentrate, you’re not paying a middle man to make it for you,” said Andy Williams, the owner of Medicine Man, another Denver retailer that has gotten a MIP license.

Vertical integration like this has become virtually a necessity for many Colorado cannabis companies, Williams said, because of the industry’s competitiveness.

Though Williams isn’t stepping into the edibles fray just yet, he won’t rule it out. He knows concentrates, which anyone with a MIP license can make, are easier and more profitable to produce because there’s far less red tape.

“Right now, that market doesn’t interest me, only because it’s ever-changing on regulations,” Williams said. “It seems to be something that causes more fear than in other areas in the cannabis space, and the changing regulations have a high cost.”

But Eschino and others said they’re able to rely on the reputations they’ve built for their brands over the past seven years, so the spike in MIP licensees doesn’t worry them.

Julie Dooley, who owns Julie’s Natural Edibles, said she saw a decrease in overall sales in 2016. She attributes it to the new entrants into the edibles business.

“(Because of the) constant barrage of new products, (retailers are) kind of closing their doors and saying, ‘We already have our set products,’” Dooley said. “It’s because they want the best of the best. They don’t want any newbies. Our reputation really makes a difference for us now.”

That gives Dooley comfort because her niche – healthy edibles for consumers who want more than infused candies – is likely to soon encounter a slight price increase as the cost of ingredients increases.

“We’re looking at mints, at a little tart,” Eschino said. “I am not worried at all about Incredibles – here in Colorado, especially. Our chocolate quality and flavor profiles are going to keep us where we’re at.”

But Eschino echoed Salazar and Williams in regards to the surge of MIP licenses: an oversupply of flower from growers who underestimated the demand in Colorado and then gave concentrate production a shot to keep afloat.

Medically Correct is diversifying for similar reasons. The company is working on constructing a cultivation operation and branching out into vape pens, Eschino said.

“It’s not necessarily food competition,” Eschino said. “I think most of those MIPs have gone into concentrates. And I think a lot of that is dispensaries are just getting their own MIP licenses so they can turn their own product into extracts and sell their own products.”