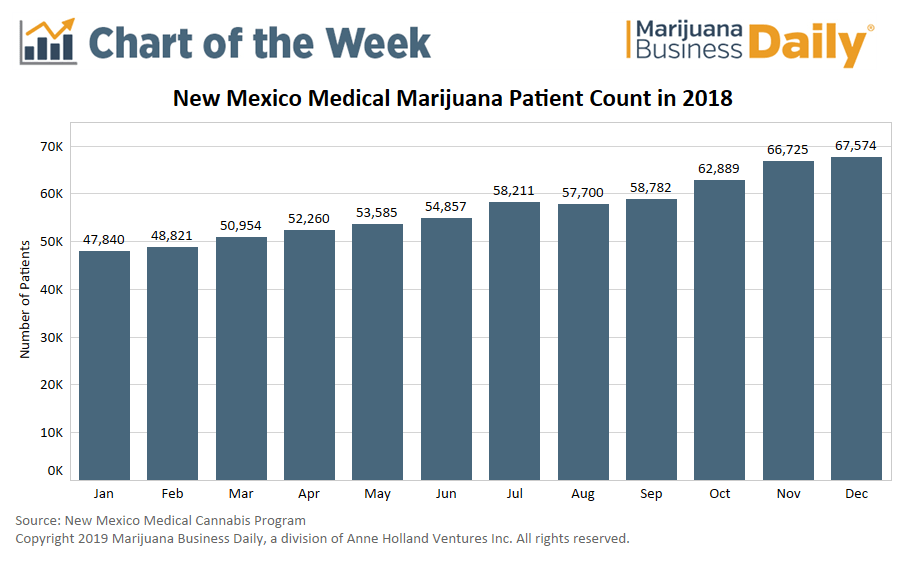 (This story has been updated to clarify that the tabled bill would have allowed recommendations for cannabis, not prescriptions.)

New Mexico’s medical marijuana program continues to grow at a blistering pace, even as supply shortages and high prices plagued the industry during 2018.

This exceeds the previous record of nearly 18,000 patients added in 2017 – an impressive feat for one of the more mature markets in the United States.

The state defines a unit of marijuana as 1 gram of dried leaves or flower or 200 milligrams of THC for infused products.

Product shortages throughout the year led to an increase in average price per gram of flower from $9.56 during the first quarter to $10.16 by the fourth quarter, an overall increase of 60 cents per gram ($17 per ounce) or 6% for the year.

Supply shortages stem from state restrictions on production. New Mexico capped the number of vertically integrated business licenses at 35 and limits the number of plants each business can grow to 450.

While each license holder can open multiple dispensaries, they are unable to increase production to meet demand.

As a result, wholesale marijuana prices in New Mexico remained relatively stable while prices dropped significantly in other states.

Relief from shortages may be on the horizon as New Mexico Judge David Thomson ruled in November that the state’s limit on cultivation was arbitrary – considered a big win for the MMJ industry.

Thomson gave the state 120 days from Nov. 1 to study the issue and develop a new rule regarding limits.

However, a bill proposed by former state Sen. Cisco McSorley to allow medical practitioners to recommend medical cannabis based on their own discretion rather than adhering to a strict list of qualifying conditions has been tabled indefinitely.

McSorley resigned his position in January to head the state’s Probation and Parole Division.

Here’s what else you need to know about New Mexico’s MMJ program: