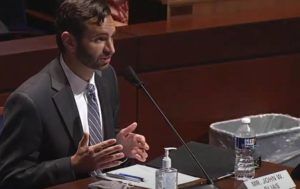 John Elias tells the U.S. House Judiciary Committee about what he viewed as unfair treatment of the cannabis industry by the Justice Department.

A career U.S. Justice Department attorney testified Wednesday that antitrust investigations of 10 cannabis mergers since March 2019 were “not even close to meeting established criteria” for such reviews and agreed they amounted to industry “harassment” by Attorney General William Barr.

John Elias told a U.S. House Judiciary Committee hearing that antitrust employees were told at an all-staff meeting in September 2019 that cannabis was unpopular “on the fifth floor,” a reference to Barr.

The resulting investigations represented a significant chunk of the antitrust division’s cases and drew in staff from other DOJ sections to assist in the probes, according to Elias.

Elias said he asked the DOJ inspector general to examine whether abuses of authority and misconduct occurred during what was a wave of cannabis antitrust merger reviews.

Cannabis companies were forced to produce millions of documents but probably only a small portion were reviewed, Elias testified.

In one case, antitrust division records, according to Elias, show that the closing of the investigative process began before the documents had been uploaded and made available for viewing by division staff.

In other words, antitrust attorneys had not even looked at the documents while the investigation remained open.

U.S. Rep. Steve Cohen, a Tennessee Democrat, asked Elias if it was fair to characterize the situation as Barr leveling a form of “harassment” against an industry he personally disliked.

“I think that’s a fair way to characterize it, yes,” Elias said.

Earlier, Elias testified that “the personal dislike of an industry is not a valid basis upon which to ground an antitrust investigation.”

Elias was one of several witnesses at a hearing that focused on Barr’s conduct in a number of cases. The hearing was titled: “Oversight of the Department of Justice: Political Interference and Threats to Prosecutorial Independence.”

Elias didn’t name any of the cannabis mergers, except the first one reviewed by the antitrust division: the $682 million MedMen-PharmaCann merger deal.

He told the committee that Barr had phoned the “antitrust leadership” and ordered a full review despite the deal not being close to meeting merger review thresholds.

The request resulted in the production of 1.3 million documents involving 40 personnel to review, Elias said.

Rep. Doug Collins, a Georgia Republican, attacked Elias, noting, among other things, that the office investigating his whistleblower complaint concluded that it was reasonable for the DOJ to seek additional information on the merger deals because of the unique challenges presented by the cannabis industry.

Elias, in his testimony, shed light on the extent of the reviews, and how it preoccupied the antitrust division: