Say you’ve had a marijuana business for a few years.

And you’re tired of running it and want to cash out, or maybe you’ve encountered an excited potential buyer looking to get into the industry.

The immediate question is: How much is the company worth?

“This is the ultimate challenge for a business appraiser,” said Colorado accountant Ron Seigneur, who has written more than 20 valuations for cannabis businesses in five states and has a book coming out this fall about how to value marijuana companies.

ADVERTISEMENT
It’s an issue sure to crop up increasingly given that cannabis mergers and acquisitions are on the rise. That means owners seeking to unload marijuana businesses will need to do their homework.

Valuations can fluctuate greatly depending on location, cash flow, local and state regulations, and how well the company has maintained business records, Seigneur said.

Another variable is Section 280E of the federal tax code, which shrinks most MJ companies’ profit margins immensely and directly affects the market values of plant-touching businesses.

Many factors must be taken into account to find the proper value for a marijuana company, Seigneur said, and it typically becomes a case-by-case scenario that can vary dramatically from state to state.

“If we value a dental practice, I can show you 700 transactions of completed sales of dental practices and what they sold for as a multiple of cash flow, and it’s a pretty tight range, because nothing changes much,” Seigneur said.

“But (in the cannabis sector), you have a business that’s new, it’s very unique and … everybody focuses on federal versus state. Well, there’s all this municipal stuff going on, too.”

For instance, Seigneur said, a licensed marijuana business in New York – which currently allows for only up to 20 total dispensaries – isn’t comparable to one in the Denver suburb of Edgewater, which has 18 cannabis storefronts.

“When you’re valuating a cannabis business, it’s like, where’s it at, what’s going on, what’s the regulatory landscape, who are the competitors, and so on,” he said.

Those factors are often combined and then adjusted based on each company’s individual situation, along with a standard valuation formula called Earnings Before Interest, Taxes, Deduction and Amortization (EBITDA).

“Where most companies start is, ‘I want to sell my company for EBITDA value X,'” Rahill said.

However, he added, that’s “no longer really a relevant model” in the cannabis sector because of the high number of variables.

“No valuation is just one of the three methods,” said Rahill, a managing director of A&M Taxand. “You sit down and you go through a combination of those three methods … I’ve heard people say it’s not an art. It’s not a science. It’s both.”

“Generally, we look at those three approaches to value – asset, income and market – and we try to figure out which of those can we apply to this specific valuation target?” he said.

Seigneur said one possible rule of thumb in valuating MJ companies is they’re often worth about six to eight times their EBITDA. However, he emphasized that’s a “dangerous” method to rely on because of the many variables.

He also sometimes uses what’s known as the Discounted Cash Flow (DCF) analysis. The DCF will often give Seigneur a different indication of a company’s worth, so he’ll then reconcile that number with the EBITDA to find a middle ground.

Andrew Matthews – the CEO of San Diego-based Greenlife Business, which assists MJ company owners looking to sell – has helped broker 44 sales of California cannabis firms since he launched his firm last November. Prices have ranged from the low six figures to $5 million, he said.

But in California – which doesn’t yet have an operational state regulatory system – the biggest value is in MJ companies that have already won local permits, according to Matthews.

“I’ve never seen a city-licensed dispensary (in California) sell for under $1 million, regardless of the numbers,” he said. “It could be losing money every day, and people will buy it for millions.”

Buyers and sellers need to consider when the company being valuated was founded if a business wants to take part in the adult use trade, Matthews said.

For instance, he said, “If a delivery service is formed prior to Jan. 1, 2016, they’ll have an opportunity to get priority and to get grandfathered into getting a rec license (under state law).

“Anyone who started their own business (after Jan. 1, 2016), the only way they’re going to stay open is … to get acquired by a licensed storefront.”

This could be precisely the right time to sell because there’s so much excitement over the burgeoning marijuana business, Seigneur added.

“We have some cannabis operators in Colorado towns – Aspen, Durango, Telluride – that have (said), ‘Value our business because we want to know what it’s worth. We’re getting people knocking on our door who are making obscene offers to buy us out,’” he said.

“It’s like big money is saying, ‘I don’t care what the economics are telling me. I’d love to have a dispensary in a hot town.’ So they pay irrational prices.” 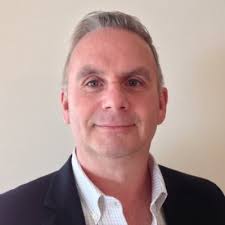 Chart: Most marijuana infused product companies have diversified their offerings 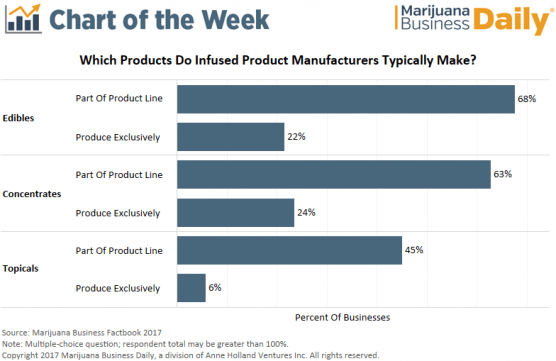